Cultivating a crop of coins is the main aim of this new slot by NoLimit City. Named Bonus Bunnies, it’s jam packed with bonus games and fun filled features for the player to enjoy. Taking a trip down to the local farm has some real potential to give the player a bundle of tasty treats, with expanding wilds, both vertically and horizontally, as well as plenty of others.

With the potential of winning up to 6,950 times the stake, giving a maximum win of £695,000 depending on the casinos you play with. With potential like that, there’s no time to waste in starting to spin the reels of Bonus Bunnies.

The stake for this slot begins at 20p and increases to a maximum of £100 per spin. This large betting range allows for players of all experiences to enjoy the coin collecting masterpiece by NoLimit City. With multipliers and wins to be had, the potential for the slot is 6,950 times the stake as a maximum, which is better than a lot of other slots we’ve seen recently.
With respin features, expanding wilds and more, it is no surprise that the RTP sits just above average at 96.2%, giving the player plenty of chances to win back the money they put into the machine.

The hit frequency for Bonus Bunnies is 18.12% which means a win can be expected roughly once every five to six spins. This does mean some patience is required to play, but the wins, as mentioned above, can be colossal when they come.

Finally, this slot has a high variance, with the volatility being marked 8 out of 10. While this volatility can be exciting, it is likely beginners may struggle to see the fun in slots if they do not win as frequently as they would like. But the reward is not as high as some high rollers would like, so we would say, if you are reasonably experienced in slots, with some patience, and some money to spare, give this slot a go for potentially incredible wins. 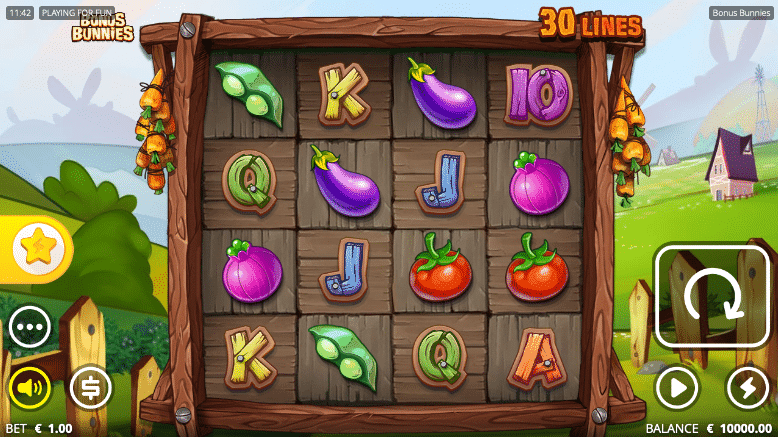 This slot is a light-hearted, cartoon game with green fields rolling in the background, presumably belonging to the farmer. The reels are made form wooden panelling, which keeps the design with the same theme throughout.

In the bonus round of this slot, you will meet a trio of cute cartoon rabbits who jump in on the action. They are very jolly and add to the happy atmosphere of the slot. Add in the bouncy soundtrack and the whole slot comes together as a cute, happy, and fun slot for all to enjoy.
While the graphics are simple, they are done well!

On first glance, this slot may just seem like a cartoon bunny slot with a jolly soundtrack, but with the 4 reels it has, it packs a punch with the features. The two main features for this slot are the expanding wilds and the Carrot Link Streak Respins!
Wild Expansion feature is the first up and these expanding wilds are the key to the base game action in Bonus Bunnies. They can be triggered by landing a wild and a rabbit bonus symbol anywhere on the 16 spaces, as long as it is the same spin. The bonus symbols is then turned into a wild and the rabbit hops to the other wild, which he will bite. This wild then expands and fills the reels.

Sounds complicated, but we promise you it is not. This feature can be amped up when two bonus symbols land, as instead of a simple vertical expansion, there will also be a horizontal expansion, giving the player a criss-cross effect, and even more wins to be had!

Landing three of the rabbit bonus symbols on the same spin will activate the Carrot Link Spins feature. The bonus symbols will then turn into carrots and reveal a prize value attached. The reels will then give you three spins on a new machine. As well as blank spaces, there are four possible symbols you can land:

Each time you land one of these, the spins go back to three. If you manage to fill the whole grid with symbols, the final one to land will be a golden key and will award a multiplier of 2x, 3x or even 5x!

This slot is simplistic and unsophisticated, but it works beautifully to give the player a rustic charm of farm life with the added bonus of cute bunnies and big wins. The cartoon design works well for the theme and the features add decent potential for wins.
The madness of the rabbits and coin collection proves even more entertaining than we first thought with our initial impressions of the slot. It is not a theme that will appeal to all, but if you fancy a trip to a farm, without the need for muddy shoes and farmyard smell, then this is the perfect slot for you.