Icarus Wilds may not be the most creative and the graphics may be a little monotonous I would recommend giving the slot a spin or two. The slot offers action and a variance that comes in between medium and high there is the chance for some very rewarding wins. Featuring multiplying, flying and locked wilds as well as free spins there is plenty to keep you entertained.

Icarus Wilds the slot is the latest release from Stockholm Gaming who are referred to as STHLMGAMING with the STHLM being an acronym for Stockholm. The slot is powered using the Silver bullet platform from the highly talented Relax Gaming. Icarus the ancient Greek guy is the star of the slot, and as history says Icarus flew too close to the sun and crashed into the sea as his wings had melted. The moral of this story is apparently something to do with arrogance and ambition. Those who are au fait with slots from this developer may see some similarities with other releases and this is due to the main character Ricky Riches who has starred in many of the slots from Stockholm Gaming. 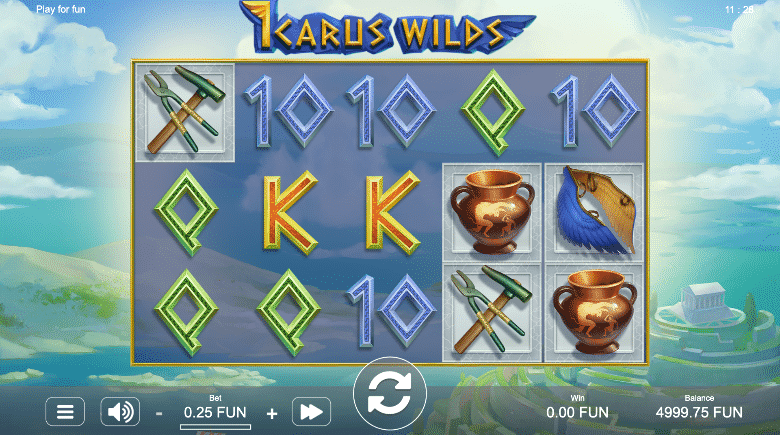 The slot plays in the same way a most Stockholm Gaming titles using a 5x3 format in the base game. In the background is a sparkling, blue sea which is the view that Icarus probably saw from his viewpoint near the sun before tumbling into the water. To the right is the famous labyrinth described in the legend which resembles a fictional city that is created on many levels to give a multi-tier effect. Overall, the slot is well constructed and has a good soundtrack, however from first impressions I see the slot as a little basic and plain when compared to any of its’ competitors.

When it comes to placing your bet, you can choose to make a wager for as little as 25p per spin to a maximum of £50 per spin. The slot comes in the category of medium to high volatility with a solid return to player of 96.54%. Due to the way the features work you could feel at times that the game is trying your patience; however, it does offer some key ingredients to provide high value wins.

The first ingredient is the value of the symbols. The low payers are the usual playing card symbols from 10 through to Ace which despite their stunning angular Greek font won’t get you far. Whereas the higher paying symbols are represented by a pot, wings, tools, a gold wreath and a hoplite helmet complete with plume. The highest paying symbols are the wreath which will reward you with 100x your stake if you manage to land five on one of your pay lines, and the helmet which rewards you with 200x your stake for five on a pay line. During the base game landing combinations that are made up of at least three of the same symbols will result in a win and the slot provides a massive 243 ways to win.

All the features include the wild in one form or another, even the bonus game is tailored by the wild. There are three flying wilds that feature in Icarus Wilds these being the multiplier, nudging and locked. When you land wilds on your 2nd, 3rd, 4th and 5th reels they can substitute for all the symbols to create winning combinations.

When you land the nudging wilds, they move up one row with each spin. Therefore, if you land a nudging wild on your bottom row it will stay there for the final three spins but if you land one on your top row it will stay for only one spin. The multiplier wilds work in the same way as the nudging wilds but they also apply a 2x, 3x or 4x win multiplier. The locked wilds have a number from 2 – 4 in the top right corner which denotes the amount of spins that they will be locked in place before they move up the rows in the same way as the nudging wilds. When the wilds are nudged from the top row, they fall down the reels before you to signify when Icarus plunged to his fate.

The free spins bonus is the highlight of this slot and this is activated by the scatter which is depicted by a gold coin. The scatter can land anywhere on your reels and landing three or more will unlock the bonus game. Once unlocked the extra row is added to the reels and the ways to win increase from 243 to 1,024. There are no set number of free spins, instead the flying wild appears on the bottom row, and the bonus game runs provided there is at least one wild on your reels.

Icarus Wilds is a great concept and all the time the wins are coming in there is nothing to dislike about it. Obviously, this is the same for all slot games, but this is something that applies more to certain slots. Regardless of the wilds the game can feel as if there is not a lot happening which can soon kill the mood of even the most patient players, and the slot does rely solely on the high value symbols so you may find that you are spinning the reels for a long time before the right symbols show up.

With the free spins having no determined amount they can work with you as well as against you. Whilst I was testing this slot, I did have a long dry spell where a batch of five free spins led to no wins, however this was closely followed by a batch of 23 which turned my gaming experience from negative to positive. So, bear this in mind as this is a volatile game that provides a real rollercoaster of wins.

Icarus Wilds is the highest paying game from this developer, and the slot offers a big 16,864x your stake. These kind of pay outs do need to have the features on their best form and it is thanks to these big rewards that will make the slot popular amongst all types of player