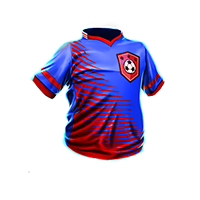 Just in time for the UEFA European Football Championship, BetSoft have released a football-themed online slot machine built around the ‘beautiful game’. Indeed, this game is all about scoring goals and coming home with the winner’s trophy. However, instead of global athletic acclaim and a head full of sporting highlights, players will come home with a great cash prize. BetSoft let themselves down a little with the graphics and theme here in comparison to their normal standard but not every slot is a home run.

There are 3 main features for this game, each one of them bringing its flavour to the exciting new game. The main one that players are likely to notice is the power shot wild bonus. This bonus serves as an ordinary wild for most of the spins. However, if 3 of these icons are landed at the same time then you will trigger the Hat Trick Hero feature. This feature is a re-spin feature with walking wilds active on the playing board. There is also a Score Meter bonus which awards a cash prize for collecting fallen walking wilds.

Hat Trick Hero is clearly football-themed, however, there is a little more going on here than just the game of football. Players will also notice that there is quite the bumping soundtrack, strobing spotlights and turbocharged graphics that make everything feel very intense. As far as the setting is concerned, unsurprisingly this slot takes place on the field of play with thousands of anonymous fans cheering you on to victory. This competitive atmosphere won’t be to everyone’s tastes, though.

The background for Hat Trick Hero is a sold-out football stadium. The perspective of the game places you at one end of the pitch just to the right-hand side of the goal. Beyond the playing window, you can see one of the stands of the stadium lit up in dramatic spotlights. This stand is blurred slightly which helps players concentrate more on the reels in front of them, which was a nice touch from the designers. If you forgot that this was a football-themed game, there is also a football set to the right of the reels.
The playing board has few little design qualities. It's just a black translucent rectangle that houses the symbols in a fairly unimaginative way. However, if nothing else, it serves a functional purpose and players can understand what is happening on the reels with no problem.

The symbols for this game comprise a collection of both generic and football-themed icons, each with its value and special abilities. The low-value symbols for Hat Trick Hero are the card suit symbols ranging from 10 to Ace in royals. The high-value symbols on the other hand are the footballs, the goalie gloves, the champion’s trophy and the stopwatch and whistle. The only special for the game, which is key to all of the bonus content in this game, is the Power Shot Wild symbol, which is the blue booted player kicking the football. When these symbols transform into walking wilds, the foot and ball symbols change into a rapidly accelerating football with blue energy lines around it.

Hat Trick Hero is played on a 5-reel, 3-row playing board with 25 fixed pay lines available to play on. To create winners in this game, players must match a minimum of 3 symbols across a pay line starting on reel 1. To change your betting level per spin, use the bet adjuster tool located at the bottom of the playing window.

Further information regarding the slot, including a display of the paytable, can be accessed by clicking on the settings menu. The spin button is located on the right-hand side of the reels. You can set up auto spins in the game’s menu.
The volatility for Hat Trick Hero is rated in the high-end of the spectrum. The return to player percentage for Hat Trick Hero is 96.23%, which is about average for a slot like this. The biggest payout that players can win on one spin is 1,260 x your stake.

As we have mentioned, the key to all the bonus content in this slot revolves around the Power Shot Wild. This is the foot kicking the ball symbol. In addition to fulfilling its role as a regular wild, filling in for regular symbols to help score wins, it also can trigger the Hat Trick Hero feature. This only occurs if 3 or more of this symbol land on the reels at the same time.

If this should happen, the wilds that were used to trigger the feature are transformed into speeding football walking wilds and the game activates a re-spin special mode. These special walking wilds move across the board one reel to the left per re-spin. If new wild symbols fall onto the board whilst you are playing this bonus, then they too will transform into new walking wilds and begin their journey left.

On the face of it, this game doesn’t look all that. However, after a few spins, you get the feeling that there is more than meets the eye here. Although as we said previously BetSoft could have tried harder with the graphics and theme, the playing dynamics and features are excellent. Considering this, the game should definitely be considered a success (if a marginal one).

What is the maximum win that players can achieve on one spin for this game?

The top prize winnable from one spin is 1,260x your stake.

What is the betting range for Hat Trick Hero?

How many pay lines are there available for this game?

There are 25 active pay lines for Hat Trick Hero.

What is the volatility rating for Hat Trick Hero?

The volatility is rated at the high end of the spectrum.

for playing with Hat Trick Hero: