Book of Gods is the latest slot to be released by BF Games will take you on a journey into Egypt where they can uncover the treasures and secrets, see the sarcophagi, symbols of the Gods and the golden books which are all awaiting you when you spin your reels, and will provide you with some excellent chances to win big.

The slot is played out over 5-reels, 3-rows and 10 pay lines which provides 243 ways to win. The return to player is set at 96.35% which is higher than a lot of the competitor slots, and the slot is available to play on all devices which gives you the freedom to play anywhere and whenever it takes your fancy. When it comes to placing your bet, the minimum starts at €0.10 up to a maximum of €40, whilst this may not appeal to the real high rollers it should be enough to appeal to most.

When it comes to the theme it is rather obvious that it is set in Egypt, but it does have a fantasy twist included too. The backdrop for the reels is created using the rivers that run through the Nile and the pyramids of Giza and whilst this is the obviously explanation, it could actual be the setting for another dimension.
The highest pay out that you can expect to win stands at 5,000x your total bet which gives you the opportunity to win some good wins. 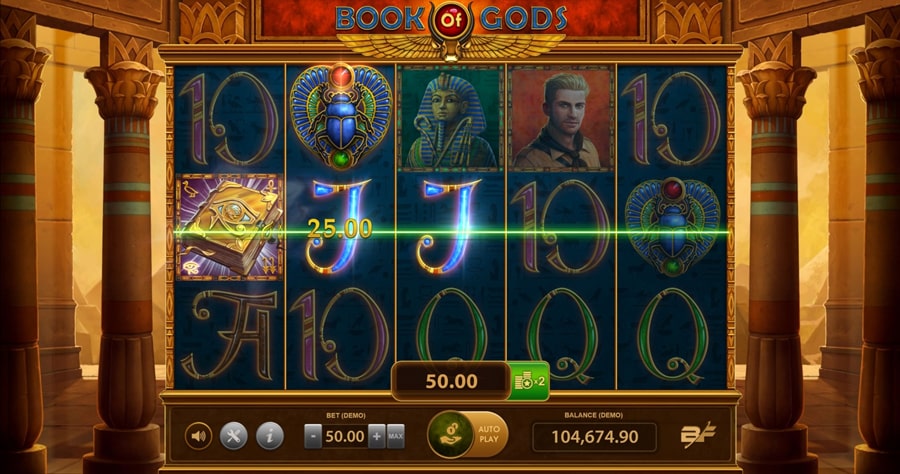 Book of Gods from BF Games includes Symbol Cloning and the Feature Drop option and to all intents and purposes this could be the developers take on the very classic “Book” style slot.

When it comes to symbols there are six lower paying symbols which are unsurprisingly represented by the usual playing card symbols from 9 through to Ace. The higher paying symbols are depicted by the four different Egyptian Gods, these being the Goddess of the Afterlife which is purple, the God of the Sun which is red, the Goddess of the Earth which is green and the God of the Moon which is blue and the top reward for landing five of the higher paying symbols is 20x your stake.
In this slot the wild and scatter are one in the same and if you land three or more of the scatter/wild symbols and you will activate the free spins feature round.

If you are impatient and simply want to get on with your game you can pay 80x your stake to start the feature drop but this is also activated when you land three or more of the scatter/wild symbol and when you access the feature drop round you can land up to 5 scatters.

When you are playing in the base game on every spin one of the playing card symbols will be revealed as the cloning symbol and when any wins are paid the cloning symbol will then change the look of your screen by filling the reels with the identical symbol. So, if you landed the Jack and this creates a win, after you have accumulated your win all the remaining symbols change into Jacks.

When you land three or more of the wild/scatter symbols you will activate the free spins feature, landing 3, 4 or 5 rewards you with 15, 20 or 25 free spins respectively. When the free spins begin a God will be revealed and this then becomes the cloning symbol for the whole of the round. The free spins can be re-activated as many times as you can and once you have triggered them for three rounds you will have all the Gods active and this can lead to some favourable wins. 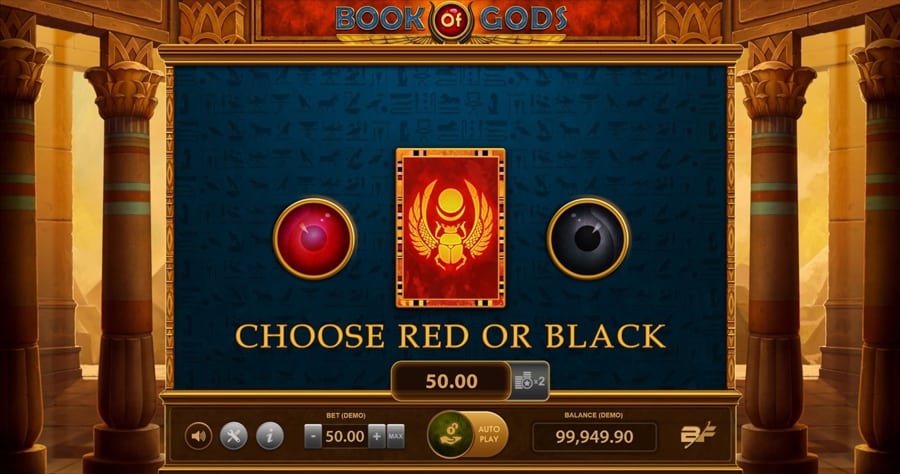 If you are a fan of the classical “Book” slots for example the Book of Dead and the Book of Ra this slot will be right up your street so to speak. This slot combines some of the best features from Magic Mirror Deluxe where they have the retriggers with extra expanding symbols and the expanding symbols that are found in the Book of Ra. The slot also has the added benefit of offering the 243 ways to win with the 10 pay lines too.

Book of Gods will provide you with huge potential which you will find in the bonuses and landing a full screen of the Goddess of the Afterlife will pay you a massive 4860x. Whilst this is not quite as much as a full screen of explorers on Book of Ra which stands at 5000x, but it is still a huge win that you will not want to miss. There is no doubt in my mind that this is a slot that offers you all or nothing with it really being based around the bonus game, and I did find that the main game began to drag.
If I am honest, I was not expecting much when I began to play this game, but as soon as the slot opened, I was pleasantly surprised. The visuals and soundtrack are well done and in keeping with the theme and the features really did offer some decent possibilities for wins. Although I found the free spins feature hard to activate when I did it was well worth the wait and my patience!

Currently there seems to be an abundance of ancient-themed slots on the market to play and I can honestly say that thanks to the aesthetics and game play Book of Gods is one of the best available right now.
It helps that I am a big fan of BF Games and I believe that they have changed the iGaming industry single handedly. Just when I thought that Bonanza 2 was their best game and they couldn’t top it they bring out Book of Gods which stands head and shoulders above any other slot that I have played from this company.