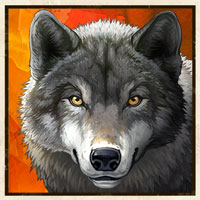 Created by the innovative studio at BF Games, Buffalo Trail transports players to the intriguing and expansive wilderness of North America. Specifically, this slot takes you to the great plains of Arizona, where great columns of rock reach for the sky and wide-open plains of grass and scrub provide a feeling of enormity to every vista. This beautiful and sparse setting is where Buffalo roam, finding water where they can and looking dramatically imposing in the mid-day sun. Buffalo Trail is a highly volatile slot with fun features and a jackpot prize that will have players drooling.

Speaking of features, these include a gamble feature, which gives you the option of trying to double any win that you land by playing a mini-game to guess whether a face-down card is red or black. Be warned, though, that you will lose your winnings for that spin entirely if you get it wrong. This game also has a free spins feature, triggered by landing three or more scatter symbols. Only high paying symbols appear in this round. However, the main action in this game is in the Cash Mesh feature, which will be explained further on in this review.

The theme for this game and one that is growing in popularity is that of the North American outback, with a special focus on the amazing Bison. For whatever reason, slot designers seem to be obsessed with Bison these days, with many titles making the impressive beast the primary visual focus for their games. It is quite understandable as the Bison is a fascinating and characterful creature that survived the Ice Age, according to the WWF. The most iconic concentration in modern times of these beats can be found in Yellowstone National Park.
The background for Buffalo Trail is the native habitat of the Bison, a large and unfenced area of grassland punctuated by giant totems of clay-based rock that catch the morning sun dramatically and beautifully. To the left of the reels, you will see these peaks turning bright orange as the natural light floods in from the right-hand side of the screen. In the centre of the background, players may be able to make out a river that bisects the scene. To the right of the playing board is a solitary Bison looking stoic and calm in the patch of shade it has found.
The board has been made to emulate a wooden trading post with the game's name and logo displayed above the board in the style of an old western sign, with the horns of a steer pinned to the top of the logo.
The symbols are split into low-paying, high-paying and special symbols. The low-paying symbols begin with the 10 in card royals followed by the J, Q, K and A in a period font that suits the pioneering epoch of the game. On the other hand, the higher paying symbols comprise the animals you will see on the board. These start with the deer, worth 600 coins for five on a pay line. They are followed by the Eagle, Wolf and Mountain Lion. The Mountain Lion is worth 1,000 coins for the top combination. However, the Buffalo/Bison is the most valuable of these symbols paying 2,000 coins for the maximum combination. The only special in this game is the scatter, which is a view of the mountain range. In addition to triggering bonuses, it is also the most valuable symbol in the game, paying 5,000 coins maximum. There is also a coin icon that pertains to the cash mesh feature.

Buffalo Trail is played on a 5-reel 3-row playing board with 25 fixed pay lines. To create winning combinations in this game, players must land three or more of the same symbols across a pay line from left to right, starting on the leftmost reel.
The betting range for Buffalo Trail is 10p to as much as £50 per spin. To change your betting level per spin, use the bet adjuster tool located at the bottom of the playing window.

Further information regarding the slot, including a display of the paytable, can be accessed by clicking on the settings menu. The spin button is located to the bottom right of the reels. You can set up auto spins in the game's menu.
The volatility for Buffalo Trail is rated in the high range of the spectrum. The return to player percentage for Buffalo Trail is 96.16%, which is over average. The studio has not disclosed the biggest payout that players can win on one spin.

The first thing to mention in this game is that there is no wild bonus. However, other features make up for this.
The first one is the gamble feature. This is available to you every time that you score a win. If you opt to gamble, you will be presented with a mini-game that will ask you to say if a face-down card is red or black. If you are correct, you will double your payout from the win. However, if you lose, you will forfeit the payout entirely.

The next feature is the free spin game, triggered by landing three or more scatters on the reels simultaneously. The more scatters that you land to trigger the bonus, the more spins that you get to play with. The game makes this round more lucrative for players by only using high-value symbols when using your free spins.

The final but most complex feature, however, is the Cash Mesh feature. Land five or more of the coin icon on the reels simultaneously, and you will activate this feature. Again, like the free spins, the number of coins landed determines the number of spins available to you in the feature.

The original winning coin symbols are then locked in place as the other symbols spin. The round will end when you have either run out of spins or have filled the entire screen with coins.

If the latter happens, all cash values displayed on the coins will be doubled, and the top jackpot prize will be awarded. Other jackpot amounts are landed by landing the appropriate jackpot name displayed on coins throughout the game. Basically, this is just another Hold and Win mechanic under a different name.

Easy to play, with a decent RTP and some fun features Buffalo Trail is as good as any slot of a similar ilk. The real excitement here, though, as in any Hold and Win or Cash Mesh slot, is filling the board with those coins and trying for the big jackpot. However, this game is highly volatile, which players should consider before placing any bets.

How many reels does Buffalo Trail have to play on?

The top payout for this game has not been disclosed by the studio.

Yes, Buffalo Trail is optimised for all mobile devices.

What is the max RTP for Buffalo Trail?

What is the betting range for Buffalo Trail?

The betting range for Buffalo Trail is 10p to £50.

for playing with Buffalo Trail: