Princess Royal is one of the latest releases from the development team at BGAMING which begs the question of whether players have ever dreamt of a life complete with luxurious things, jewellery and expensive cars and also been able to mingle with the highest society members. If these things appeal to you, then this game which is about the wealthy royal luxurious life that winners could end up enjoying so much. It is true to say that Princess Royal the slot is all about status and money. 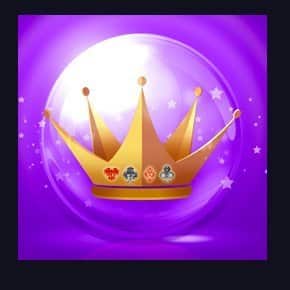 If you find yourself wanting for this type of lifestyle, I suggest that you read the whole review as this will prepare you for your new life as a member of the jet set. Players will also be very surprised to find that the Princess Royal slot doesn’t take place in a lavish palace or country estate. Instead players will see that the reels of the game appear to be floating in the sky on a really sunny day where there are fluffy clouds hanging around.

The whole scene is rather reminiscent if a vision of heaven or how someone might may envisage it. Allegedly money doesn’t bring happiness, but it is a great way to start! There could be a hidden message I this but from a totally aesthetical point of view the slot is really good without being original or stunning.

When it comes to the soundtrack players will soon realise that the only sounds, they will be treated to is a reduced and simple tune that is activated with every spin and there are slightly more sounds when the player lands a win. Princess Royal is designed well but not anything overly special. The experienced players will get the hang of the rules in no time at all, and even beginners will find the slot quite easy to get a demand of.

The game play is restricted in quite a few ways and players have just 5-reels and 9 pay lines to bet on, which is less than you would find on most slot games. Players can still select the amount that they bet per line starting from just 0.10 up to 1 coin well as the number of pay lines they wish to activate by simply tapping the menu symbol which is located in the top right-hand corner of the game screen.

All of the settings that players may need can be found in the menu or alternatively players can use the coloured tab which is by the reels. Hit the spin button located to the right, place your wager and you are ready to go. Any symbols that create a winning combination will then pay out from left to right.

Players also have the option to use the auto spin function which allows them to select a number of auto spins at the same bet value so they can sit back and watch the action unfold before them. All the player has to do is set this feature up in their menu and they are ready to play. By now players should be ready to get going so let’s take a look at the symbols used in this slot game.

There are eleven basic symbols which are a few more than usual and players can view on the Princess Royal pay table however it would be fair to say that this is the only original styled element that players will find. The first part of the menu has the usual card symbols that range from number nine through to the Ace and these are the most common and least valuable symbols.

The other part of the pay table is made up of a variety of expensive things including a red Sports Car, a Heart that is made from Ruby, a Horseshoe that is encrusted with diamonds, a view of a beach side luxury hotel and a ring complete with an emerald four leaf clover. There is also a lucky charm vibe that seems to surround this slot which is most fitting.