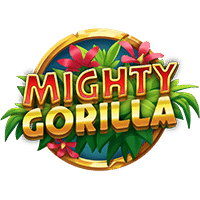 If you have ever wanted to travel to an uncharted island in the middle of the Pacific Ocean in search of a mysterious gorilla species, this might be as close as you ever get. Taking a lot of inspiration from King Kong, this new slot from Booming Games transports players to a lush island paradise where explorers are tracking the majestic and powerful silver-backed Gorilla superspecies. In terms of how the game actually functions, Mighty Gorilla is a six reel, 4-row game with 30 fixed pay lines. In addition to the thrill of finding these incredible animals, there is also a range of bonus features to enhance the playing experience of this game.

These include two wild-based bonuses. The first is the random wilds bonus. This feature will randomly deposit up to an extra 24 wilds on the board on any spin completely at random, which has obvious consequences for your win rate. The other is the exploding wild feature. This bonus concerns the special exploding wilds, which when they land on a reel explode and then take hold of the reel, expanding into all available positions. There is also an elimination feature that removes all low-paying symbols on the board at random. Finally, there is a free spin round and a bonus buy option too. All symbols will be explained in greater detail later on in the review. 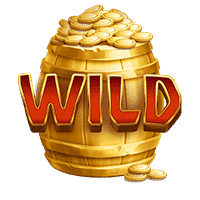 The theme for this game is loosely based on the story of King Kong, the 1933 film, the screenplay of which was written by Ruth Rose and James Creelman. Originally debuting in New York City on March 2 to rave reviews, King Kong has inspired countless remakes, books and various media for generations. Although not explicitly linked to King Long, this game has all of the same tropes of King Kong and has even named the island on which this game is taking place, Skull Island, after the original Skull Island in the film. Booming Games have just stopped short when actually naming the slot, calling it Mighty Gorilla, which sounds like a terrible rip-off version of the film.

The background for Mighty Gorilla is the island paradise on which this enormous ape lives. It is not similar to the original setting – cliffs and mountainsides, dense jungles, volcanic craters and tall palm trees swaying in the wind are supposed to feature here. The setting is supposed to give the impression of an impenetrable island, difficult to navigate and even harder to move around. In the latest film, the exploring crew even comes across other huge beasts that cause trouble for them, including, of all things, a T-Rex. However, this interpretation of Skull Island is much more low budget, looking more like a Sands Resort than a dangerous tropical island.

The board for this game is a wooden rectangle wreathed in thick jungle vines to give the right aesthetic feeling.
The symbols for this game are split into low-paying, high-paying and special symbols. The low-paying symbols are the card suits – diamonds, hearts, clubs and spades. The diamond suit is the most valuable, paying 5x the stake for the top combination. However, the higher paying symbols are the waterfall, explorer woman, male explorer, and finally, the mighty Gorilla himself. He is the most valuable symbol in the game, paying 15x the stake for the top combination. The special symbols finally are the scatter and the wild. The wild is a barrel full of coins, and the scatter is the Mighty Gorilla logo.

Mighty Gorilla is played on a 6-reel, 4-row machine with 30 fixed pay lines. To win combinations, players must land three or more matching symbols on pay lines moving from left to right, starting from the leftmost reel.
The betting range for Mighty Gorilla is 30p to £171 per spin. To adjust their bet levels, players can toggle their stake up and down using the tool located at the bottom left-hand side of the screen.

Further information, including a short tutorial and a display of the paytable, can be found via the menu button in the right-hand corner of the screen. The spin and auto spin buttons are located in the centre of the screen.
Volatility for this slot is rated in the high range. The return to player percentage for Mighty Gorilla is 95.49%, which is below average. The biggest payout that players can win on one spin is 1,400x your stake.

The first feature in this game is the random wilds feature. This bonus randomly adds up to 24 extra wild to the board on any given spin, helping to score multiple wins.

The second feature also includes wilds; however, these are in an exploding format. Exploding wilds when they land at random explode and fill the reel on which they have landed entirely. These special wilds, however, can only land on reels 2-6. This feature can occur in both the base and free spins games.

The next feature is called the elimination bonus. It removes all low-paying symbols on the board, which will then cause a cascade and lead to much bigger wins.

Finally, there are the Mighty Gorilla free spins. These are triggered when players land three or more of the scatter icons on the reels at once. Doing so awards you with eight free spins. However, the more scatters that you land, the more spins that you will earn. You can also retrigger this bonus by landing additional scatters from within the round.
There may also be a bonus buy option. However, this is not available in the UK.

Although you might not actually get to travel to an exotic land in search of a 30-foot gorilla, this game might give you a passable simulation. As slots go, Mighty Gorilla isn’t going to set any records, especially when looking at its top win. However, if you are into easy to play games with wilds at their centre, this could be a decent pick for you.

Is there a free spins round for Mighty Gorilla?

What is the betting range for Mighty Gorilla?

What is the return to player percentage for Mighty Gorilla?

What is the volatility for Mighty Gorilla

for playing with Mighty Gorilla: