for playing with Rhino Hold and Win:
TAGS Latestmost-popular 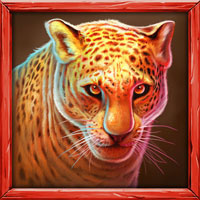 Hold and Win slots seem to be flooding the market at the moment, and in their desperation to control as much of that market as possible, Booming Games continue to reskin the same free online slot games more or less over and over again. This latest in a long line of Hold and Win productions from the developer takes place on the African Savanna, as the natural habitat of the principal character for this slot, the rhino. You may remember that the last slot this producer created was of an almost copycat design but with a Buffalo – Buffalo Hold and Win. The only difference is that they have changed the aesthetics a bit and tweaked the math model.

The features for this slot include a wild bonus which can come in regular or fully staked sizes. However, the wild symbol, when in the larger size, can only fall on reels 2 and 5. Wilds step in for other symbols to help form more wins. Another bonus in this game is the free spins Hold and Win game, triggered by landing three scatters on reels 2, 3 and 4. This awards you 8 free spins with the possibility of landing jackpots. Finally, there is the Hold and Win feature triggered when you land 6 or more bonus symbols on the reels at the same time. All features will be explained in more detail later in the review.

The theme for this slot is the African savanna. The African savanna ecosystem is a tropical grassland with warm temperatures year-round and with its highest seasonal rainfall in the summer. The savanna is characterized by grasses and small or dispersed trees that do not form a closed canopy, allowing sunlight to reach the ground. The African savanna contains a diverse community of organisms that interact to form a complex food web. One of these is the amazing African rhino which is the principal character or animal in this slot.

The background for this slot is a depiction of said beautiful savanna. In the foreground are the rough grasses and reeds that make up the majority of the terrain on the savanna. Dotted around, you will also see the iconic acacia trees, which provide sparse shade for the various animals in the ecosystem. Their triangle shapes are one of the most visually powerful on the landscape. In the background, there seems to be a mountain of some kind. In the savanna, these are called inselbergs- lone mountains or outcrops that seem to arise from nowhere.

The board for this slot is a wooden construction, with different colour frames inside it for the different symbols that are represented there.

The symbols for this game are split into low-paying, high-paying and special symbols. The low paying symbols in this game comprise the card royals of J, Q, K and A. The higher paying symbols, on the other hand, are the flamingo, the crocodile, the leopard and the rhino. The rhino is the most valuable regular symbol in this game, paying out at 10x the stake for the top combination. The specials finally comprise the wild, represented by an animal pawprint, and the free spins scatter, which is the sunset going behind the trees. The scatter pays out at 2x the stake for three of a kind on a pay line. 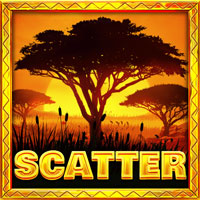 Rhino Hold and Win is played on a 5-reel, 3-row playing board with a maximum of 25 fixed pay lines. Players must land three or more matching symbols in paying combinations starting from the leftmost reel to score wins in this game.
The betting range for Rhino Hold and Win is 25p to £250 per spin. To adjust their bet levels, players can toggle their stake up and down using the tool located at the bottom left-hand side of the screen.

Further information, including a short tutorial and a display of the paytable, can be found via the menu button in the right-hand corner of the screen. The spin and auto spin buttons are located in the centre of the screen.
Volatility for this slot is rated in the high end of the spectrum. The return to player percentage for Rhino Hold and Win is 95.87%, which is below average. The biggest payout that players can win on one spin is 1,200x your total stake.

The wild feature is a feature that concerns the wild symbol. It has the ability to substitute for all other symbols barring the coin and scatter symbols. It can come in sizes from 1x1 to a full-stack. Both help to score more wins.

The main Hold and Win bonus feature is triggered when you land three scatters on the middle reels. This will give you eight free spins. During the free spins, you will only see high-value symbols such as wilds, scatters and high paying regulars. Like in the other Hold and Win bonuses, you’ll want to land multiple value coins to try and win the available jackpots. The more symbols you land, the larger the jackpot you can win is. There are three jackpot amounts ranging from 2x the stake to 1,000x the stake.

If you know Hold and Win slots and love the rush of trying to fill up the grid with bonuses, then you’ll love this game. However, if you’re not into this type of game and find the bonus rounds tedious, this is probably not the game for you. The RTP and poor top prize also don’t bode well for player satisfaction. This may be a slot best played in free mode.

Is there a free spins round for Rhino Hold and Win?

What is the betting range for Rhino Hold and Win?

What is the return to player percentage for Rhino Hold and Win?

What is the volatility for Rhino Hold and Win?

The volatility for this game is rated in the high end of the spectrum.

for playing with Rhino Hold and Win: