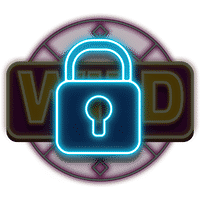 Booming Games introduce to the playing public one of the simplest yet most satisfying games the market has seen thus far this year. As many classic games often do, this slot hinges on the influence of one specific symbol.

However, this game takes that premise to a whole new level, with the only symbol on the board being the lucky 7 in various colours. Depending on the patterns in which it lands, players could come away with a maximum score of 2,000x the stake. Will the neon lights and multicoloured reels be kind to you? Why not dive in and give the game a spin for yourself?

Despite this being a somewhat simplistic game, Booming Games have engineered it with a couple of exciting features to keep play interesting. It won’t surprise you to learn that one of these features is a re-spin bonus.

The Wild re-spin bonus is triggered when a wild symbol appears on the reels. When it lands, it freezes in place and triggers a re-spin. If any new wilds land in that re-spin, then the process repeats itself. This mechanic will keep going until all symbols on the board are wilds. The other feature in this game is a free spin bonus. All features will be explained in greater detail later in the review.

The theme for this game is a combination of outer space and 80s’ neon disco. Visually the neon definitely takes centre stage, with the symbols, board, logo and the wild window all being heavily dominated by the use of neon. Due to this, the overall effect is a little like you have been welcomed to Las Vegas with its luminescent lights and multicoloured vibrancy. The outer space aspect of this theme comes more in the audio quality of the slot. The game has a soundtrack that gives off plenty of futuristic vibes, giving the slot a whole new dimension to its theme.

The background is one of the more straightforward you will see when comparing online slots. It is just a static image of a kind of purple void, a little like space. Then again, the light streaming in from the right-hand side doesn’t give it a feeling of space, more of a dark night somewhere on earth. This is further evidenced by the dust particles floating in the air, which looked to be stars on first inspection. Whatever the background is trying to represent, it does a great job of making the symbols stand out.
The playing board in this game looks like a Vegas strip billboard sign with a classic rounded shape that perfects the well-loved aesthetic.

The symbols for this game are dominated by lucky sevens in all different colours and a couple of special icons. The turquoise and blue 7 are the least valuable, paying out at a maximum of 0.9x the stake. The next most valuable are the purple and blue 7s which payout at 1.2x the stake for the top combination. These are finally followed by the red 7s, which pay 1.5x the stake for the top combination. The two bonus symbols are the bonus scatters and the wild re-spin icons. The scatter is a di in-neon red with the word bonus underneath it. On the other hand, the wild is the word wild with a padlock in the middle of the word.

Wild Bonus Respins is played on a 3-reel, 3-row machine with 5 fixed pay lines. To win combinations, players must land three or more matching symbols on pay lines moving from left to right, starting from the leftmost reel.
The betting range for Wild Bonus Respins is 5p to £25 per spin. To adjust their bet levels, players can toggle their stake up and down using the tool located at the bottom left-hand side of the screen.

Further information, including a short tutorial and a display of the paytable, can be found via the menu button in the right-hand corner of the screen. The spin and auto spin buttons are located in the centre of the screen.
Volatility for this slot is rated in the high range. The return to player percentage for Wild Bonus Respins is 95.97%, which is below average. The biggest payout that players can win on one spin is 2,000x your stake.

As we mentioned in the introduction, this game has two bonus features. The first of which is the free spins game. This is triggered when players land three scatter symbols in view. This awards players with 15 free spins, free of charge. Sadly, you cannot retrigger this feature from within the bonus.

The other feature in this game is the Wild Re-Spin game. This feature is triggered whenever a wild symbol appears on the reels. When it does, it will lock in place and cause a re-spin of the other symbols. If a new wild lands during this round, the process will repeat. There is no limit to the number of times that this can happen, all the way to the point of all symbols on the board becoming wilds.

If you enjoy classic slots with a modern makeover, you are bound to enjoy Wild Bonus Respins, as it incorporates the symbols and reel set of a classic game but with the features and visual appeal of a modern slot. This game is also mobile-friendly and comes with a maximum prize of 2,000x the stake. However, the volatility is quite high in this game, so do be aware that features could take some time to trigger.

Is there a free spins round for Wild Bonus Respins?

Yes, indeed there is.

What is the betting range for Wild Bonus Respins

The stake range for this game is between 5p and £25.

What is the return to player percentage for Wild Bonus Respins?

What is the volatility for Wild Bonus Respins?

for playing with Wild Bonus Respins: