Ancient Warriors is a video slot game brought to you by Crazy Tooth Studio - who are often praised for their innovative twists on traditional slot games. Here, players are encouraged to ‘awaken the ancient warriors to unlock treasures within.’ While a high volatility rate means winning big can be a little tricky - players have the chance to x1807.00 their original bets. The slot game boasts 4x6 reels with 50 pay lines. 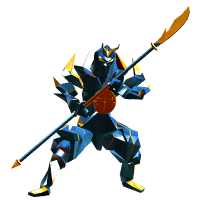 While depictions of the far east and its associated warriors and mythology are not uncommon in the world of slots (perhaps to their association with wealth, treasure, and riches), Ancient Warriors is both thematically and aesthetically pleasing. It uses a vibrant neon colour palette alongside a unique transparent reel which allows for the ancient warriors to be visible behind the reel at all times. The see-through real is a nice additional feature, making the game look great. Unsurprisingly (given that it is Crazy Tooth Games), the graphics are of particularly high quality - as they do not cut any corners when it comes to design. The game is once again supported by a nice soundtrack and several sound effects, which help round off the far-eastern theme.

There are various symbols featured throughout the game, which are carefully selected to match the theme.  This includes feature symbols such as dragons, snakes, cats, and monkeys - which often appear throughout far eastern history, mythology, and folklore.  There is also a wild symbol in the form of the familiar Yin Yang design and a scatter symbol. In this game, wild cards appear when 3, 4, or 5 of the same symbols appear on the screen at once. 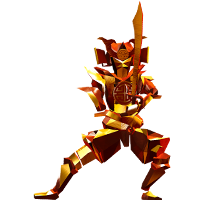 The most interesting features of Ancient Warriors are the Wild and Scatter Symbol. For example, when three or more scatter symbols appear on screen, they will activate an ‘Ancient Warrior bonus spin’ feature. This equates to five free spins - which are great for boosting your winnings. During your free spins, any Wild Symbols become ‘sticky’ - meaning they stay on the board for the rest of the game. Wild symbols (Yin Yang) often offer a range of different score-boosting values - from x2 to 10x. You can also gain extra points when the featured symbols such as the monkey, snakes, and cats land stacked in rows of 3-5 symbols - this is referred to as a stacked multiplier during gameplay.

The gameplay, much like the overall design, is rather straightforward. To win, players must land three or more matching symbols on any spin. There are also plenty of bonuses and additional features available to maximize your earning potential, though some are harder to come across than others. However, the immersive nature of the gameplay is enhanced by excellent animations, making it feel a little more elevated than a more traditional video slot game.

What is the volatility of Ancient Warriors?

Like many of the games brought to us by Crazy Tooth Studio, Ancient Warriors has a high volatility. While the special symbols and bonuses (wild, scatter, and stacked multipliers) can help you increase your profits, the symbols themselves have little payout. However, this doesn’t mean that there is not the potential to earn big when playing.

What is the RTP for Ancient Warriors?

Ancient Warriors has an impressive RTP of 96%.

Can I play for free?

A free trial version of the game is available for those who like to try out a game before putting any money down. From then on, bets can start from as little as 20 p.c - with a maximum bet being 115. Furthermore, as mentioned previously, players also have the chance to win free spins throughout the game.

How can I play Ancient Warriors Slot?

Ancient warriors is played online and can be accessed via desktop devices (laptops, computers) or your mobile phone. This is great news for those who like to play when they are out and about, such as during a commute.

Is Ancient Warriors worth a spin?

Ancient Warriors does not promise to be any more than it is - a visually pleasing game that is easy to play and gives you the chance to earn a bit of money. While those looking for a more immersive or unusual experience may want to venture elsewhere, those who value simplicity will enjoy Ancient Warriors for exactly what it is.

for playing with Ancient Warriors: