Created by Endorphina, this slot leads players on a thrilling adventure through the mystical jungles of Eldorado, one of the world’s most famous fabled hidden cities, a mythical land packed with all manner of riches and treasures, ready and waiting to be discovered. With 5 reels, 3 rows and 10 paylines, this slot offers plenty of opportunities for the players to win!

There is the potential to win €500,000, so this game offers rewards for everyone, even if they don’t have the highest budget! With bright graphics and stunning visuals, this slot does not only appear to those who love a good gameplay, but also to those who love to be wowed by what they are playing. The slot is based on the mythical city of Eldorado, also known as the City of Gold, which was the centre of many expeditions in the 1500s. Although these were unsuccessful, this slot allows you to trek to the Eldorado jungle, and discover the hidden treasures within! Join Sir Walter Raleigh and his explorers as they journey through the wilds and look to find treasure beyond your wildest dreams! 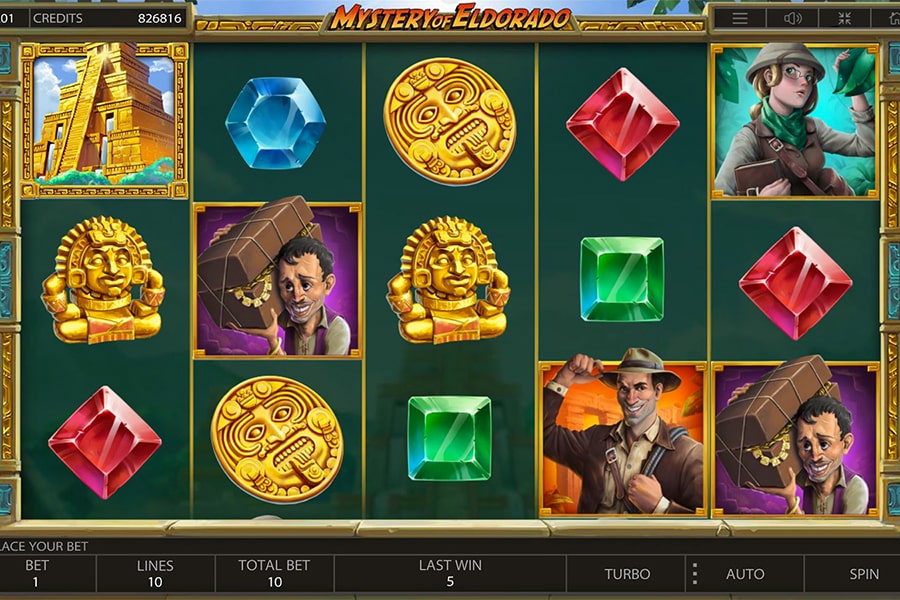 With bets starting at €0.01 and increasing up to €100, this slot has something to offer everyone. The slot can be played with credits or money, giving the players unlimited potential with this game. Lower paying symbols include the three gem stones: red, blue and green, as well as the gold coin and the golden statue, both styled into the Aztec-theme of the slot. Higher paying symbols include 4 picture symbols: a young man with a treasure chest, a young woman explorer, Sir Walter Raleigh and the Golden Temple of the City of Gold. Each is superbly crafted and when matched, can help the player win big!

There’s also a scatter symbol which is the map, with the word ELDORADO embossed across the front. This can substitute all the other symbols, as well as being the trigger for the Free Spin feature! All the symbols feature on a beautiful set of gold and turquoise reels, featuring against a background of temple steps and a striking blue sky. With an overall Aztec-feel, this slot design is stunning, with everything rotating around the theme of the City of Gold.

There is a Free Spin feature, triggered by 3 or more scatters, offering the player 10 free spins and the potential of winning up to 200 times the player’s stake. Not only that but the feature randomly picks a particular symbol which is given the ability to randomly expand, which continues throughout the entire game. As these expanding symbols can spread across many reels simultaneously, giving the possibility of up to ten winning combinations across the reels! There is also the Risk Game, considered a Gamble feature. If you’re brave enough, you have the potential to double your winnings up to 10 times!

Choosing from a set of four cards laid out, if you find a card higher than Dealer’s card, you double your win! All the cards can be lower or higher than the Dealer’s, it is all randomised. The Joker beats any card and cannot be beaten! A draw means your winnings stay the same and you have another attempt at doubling them!

Put your hiking boots away, and settle down on the sofa, as Sir Walter Raleigh ventures through the jungle to the City of Gold, collecting treasure for you as you watch from the comfort of your own home! With up to €500,000 to win, this is the perfect game for anyone!