G Games being who they are, it wasn't sufficiently weird enough for their latest game to be set in a world created entirely from sweets and baked goods. These candies also had to be alive and psychologically unhinged, hence the name Psycho Candies. With expressions on the candy symbols ranging from irate fury to full-on psychosis, this slot makes for quite the challenging visual feast. However, if you can bear to watch the bedlam of the reels, there are some pretty exciting prizes and features to trigger.

This game comes with a range of features, from cascading reels to pick'em bonuses. These also include a bomb bonus, a progressive multiplier mechanic, a boss beating feature, a free spins game and a jackpot wheel bonus. Indeed, the features don't seem to stop in this game. All features will be explained later on in the review. 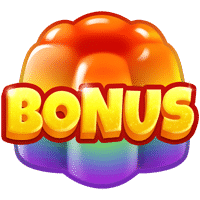 A lot is going on regarding the visuals in this slot. You are first greeted by a screen with a wizard and a swirling blue vortex. However, the boss mode changes the screen, taking you to a fantasy land made from candies and all things sweet. Here a large red animated character – presumably the boss takes to the screen. This scene change is also joined by another character – a green blob dog creature that sits to the right of the reels, eating the bonus symbols. This colourful whirlwind is quite the Willy Wonka-esque theme and one that will undoubtedly keep players on their toes.

As we have just discussed, the background for this slot changes with the various levels of gameplay that players encounter throughout the feature. The first background is a purple and blue whirlpool that is also covered in the occasional sparkling lights. This is the background accompanied exclusively by the female wizard who appears to the right of the playing board. The following background is the environment entirely created from sweet things such as Chelsea buns, hard candies and a range of other confectionaries that give the impression of a child's ideal fantasy planet.
The board reminds us of the Candy Crush Saga board because it is a cluster pays engine game in a square, and glossy candies dominate it.

The symbols for Psycho Candies comprise the various hard candies that you will find on the reels. The lowest value candies that you will find on the gameboard are the star and red candies. The red candy, for example, pays 3.5x your stake for a 7+ cluster. The middle-value candies, on the other hand, comprise the blue and purple candies -the blue paying 5x the stake for the top combination available. The most valuable symbols finally are the green and yellow candies. The green pays again 5x for 7+ in a cluster; however, the yellow pays 10x. There are also special symbols in the bonus symbol - a multicoloured hard candy and the free spins symbol - a trio of chalk hearts. Finally, there is also the bomb symbol, which is self-explanatory.

Psycho Candies is played on a 6-reel, 6-row playing board with a cluster pay engine. To create winners in this game, players must land clusters of matching symbols in adjacent positions.
The betting range for Psycho Candies is 20p to as much as £20 per spin. To change your betting level per spin, use the bet adjuster tool located at the bottom of the playing window.

Further information regarding the slot, including a display of the paytable, can be accessed by clicking on the settings menu. The spin button is located to the bottom right of the reels. You can set up auto spins in the game's menu.
The volatility for Psycho Candies is rated in the medium range. The return to player percentage for Psycho Candies is 97.5% which is average. The biggest payout that players can win on one spin is 5,000x your stake.

This slot, for all its strange thematic points, does have an amazing collection of features. Before we explain these, however, it is worth clarifying that this is a cluster pay machine with a cascading reels feature. Meaning, winning combinations are destroyed and replaced by new symbols to give you more chances of creating more wins from one spin. The cascade mechanic in this game also comes with an unlimited progressive attached multiplier, meaning that the more consecutive cascades you trigger, the larger a multiplier will grow. It starts at 1x and increases by one for every successive cascade.

The first feature is the Jelly Pick 'em bonus game. To trigger this feature, players must land a collection of bonus symbols on the reels simultaneously. The game then gives you between 2 and 5 picks depending on the number of bonus symbols you landed. A minimum of 4 is needed. You then pick jellies to reveal cash prizes.

The second feature is the bomb bonus. Landing a cluster of 4 bombs creates an explosion on the reels. The more bomb symbols, the larger the explosion. This explosion destroys symbols and lets new ones fall into their places.
Boss levels are also part of this game. Above the reels, you will notice 5 different coloured cauldrons, each of which corresponds to a coloured symbol. Filling a cauldron with wins with the correct symbols gains you access to a battle with 1 of the 5 bosses. In this battle, you spin the reels again, but the boss takes a hit with every win. If the boss takes enough hits, they will be defeated, and you are given access to the Jackpot Wheel.

This game also has a free spins game. To trigger this bonus, players must land 4 or more of the free spin symbols on the reels simultaneously. The more symbols landed, the more free spins you are granted. All wins increase the attached multiplier by 1x in the free spins round, including cascades. Furthermore, unlike in the base game, the multiplier does not reset when you land a non-winning spin. It also has no upper limit.

Finally, there is the jackpot feature. This, as mentioned, is triggered when you defeat a boss. You are given 1 spin of the bonus jackpot reel here, where 1 of 4 jackpots are available to win. These jackpots change in proportion to the number of bosses you have defeated. The biggest jackpot is worth 2,000x your stake. This feature can also award you with up to 22 free spins.

Bursting with features and madcap action, Psycho Candies is an excellent slot for those that like manic spins and great prize potential. The statistics are also favourable with a better than average RTP and a tempting top prize of 5,000x your stake. This is definitely a game worth a few spins if you can get your head around the theme.

How many reels does Psycho Candies have to play on?

This game has 6 cluster pay reels.

The top payout for this game is 5,000x your stake.

Yes, Psycho Candies is optimised for all mobile devices.

What is the max RTP for Psycho Candies?

The maximum return to player percentage for Psycho Candies is 97.5%.

What is the betting range for Psycho Candies?

The betting range for Psycho Candies is 20p to £20.

for playing with Psycho Candies: