for playing with Vegans Vs Vampires:
TAGS Latestresponsive 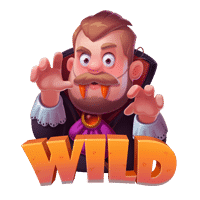 Yet again, G Games (Gluck Games) have developed a truly unique gaming concept in their newest slot game Vampires Vs Vegans. Apart from having a pleasing alliteration, this game's premise is that for whatever reason, vegans have discovered the blood-sucking ways of the vampire community and are protesting their lifestyle based on their causing harm to animals, in this case, humans. In terms of a physical altercation, it would be interesting to see who would actually win between the two groups. That is if vegans were equipped correctly with garlic and stakes.

Bonus features include a bonus wheel game triggered by landing scatter icons. One spin of the wheel could reward you with cash prizes or activate another feature. This game also has a free spins game which starts with 10 free spins and selects one regular symbol to become an expanding symbol. Finally, there is the Vampire Tower feature accessed via the wheel of fortune bonus. When this feature is triggered, players are taken to a tower with 5 floors. Starting at the bottom, you move gradually up, choosing windows to reveal prizes. There is also a wild bonus.

The theme for this game is quite bizarre but, in all fairness, has plenty of originality. Who would have thought that these groups would ever meet, let alone be involved in confrontation? The idea is a silly one and precisely the kind of uplifting and light idea that slot games should be based on. The background for Vegans Vampires is a picture of the typical cape-wearing vampire standing opposite what this game thinks a typical vegan looks like. This being a bearded man with glasses, a plaid shirt and an aloof expression. Behind them is a gentrified city street with signs for yoga and eco cafes, encroaching on a vast gothic castle. The subtext for this image is that hipsters and vegans are pushing into an area where vampires have lived for centuries. This encroachment is creating some local tension between the two groups, which G Games has illustrated so well in the background.

The board for this game has been designed to look like those vertical signs that you see on the sides of buildings in city centres. The purple colour fits well with the dark and gloomy background whilst also acting as a clear separating tool from the background. The symbols for this game are split into two different categories, vegans and vampires, with a third category for special symbols. The angry vegan protester is the least valuable symbol worth 50x your stake for the top combination. Carrots and corn made into crosses are worth the same. Up from these symbols is the vegetable juice, worth 60x the bet. However, the most valuable vegan symbol is the garlic firework, which pays out at 75x the bet. The vampire symbols start with a trap baited with vegetables which pays 50x the stake for the top combination. Next is the female vampire, also worth 50x. Then there is the male vampire worth 60x, and finally, there is the skull worth 75x. There is also a wild icon and a scatter. 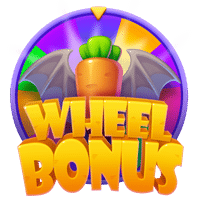 Vegans Vs Vampires is played on a 5-reel, varying row size playing board with 25 pay lines available. To create winners in this free casino slot games for fun, players must match 3 or more symbols in combination from left to right on the reels. The betting range for Vegans Vs Vampires is 5p to as much as £150 per spin. To change your betting level per spin, use the bet adjuster tool located at the bottom of the playing window.

Further information regarding the slot, including a display of the paytable, can be accessed by clicking on the settings menu. The spin button is located to the bottom right of the reels. You can set up auto spins in the game's menu. The volatility for Vegans Vs Vampires is rated in the medium range. The return to player percentage for Vegans Vs Vampires is 95% which is below average. The biggest payout that players can win on one spin is 500x your spin.

The first feature for this game is the bonus wheel feature, triggered by landing 3 scatter bonus icons anywhere on the first, third and fifth reel. The bonus reel gives you one spin. Different cash prizes are available here as well as access to other bonus features. The second feature in this game is the free spins round, triggered by landing it on the wheel bonus. It gives you 10 free spins. However, one of the basic symbols will be turned into an expanding symbol before they are activated. These can provide extra prizes.

Finally, there is also a bonus feature called the Vampire Tower bonus. This feature takes you to a separate screen where you have a tower with five floors. Starting at the bottom, you progress up the floors choosing windows on each floor revealing cash prizes. If you reveal a prize, you progress to the next floor. If not, you stop at the level you are and return to the base game.
There is also a wild bonus – the vampire with blood around his mouth is the wild icon. This icon can substitute for any other regular symbol on the board to help form more wins.

Sadly, as entertaining and visually stunning this slot is, there isn't much here that will convince players to spin these reels from a gambling perspective. For one, the RTP is very low. Secondly, the top prize is also meagre compared to similar games. If you are looking for fun and maybe a few free games, this might be a good choice. However, if winning big prizes is your motive, we would say steer clear of this slot.

How many reels does Vegans Vs Vampires have to play on?

This game has 5 varying row reels.

The top payout for this game is 500x your stake.

Yes, Vegans Vs Vampires is optimised for all mobile devices.

What is the max RTP for Vegans Vs Vampires?

The maximum return to player percentage for Vegans Vs Vampires is 95%.

What is the betting range for Vegans Vs Vampires?

The betting range for Vegans Vs Vampires is 5p to £150.

for playing with Vegans Vs Vampires: