A superhero who stays a superhero even while loving (and from the looks of it, eating, a lot of it) candy? That is the visual you get if you play Captain Candy, an online slot game from Game Art. A candy wonderland as colorful as any created greets players as they spin for big prizes. And the game’s namesake hero looks on as the reels spin, even offering assistance from time to time. Captain Candy pays out left to right in this 5 reel, 25 payline slot game with betting players of any level can understand. So prepare yourself a tasty treat as you play the online slot game, Captain Candy.

Candy and sweets are the clear theme of Captain Candy. Players spin reels of symbols that are all tasty treats made of sugar. Cupcake icing covers the top have of the gameboard, while peppermint covers the bottom. And the reels sit on top of a layer of gingerbread. There’s clearly a mystical candy made world behind the game board as well. But it’s very hard to see it behind the reels and Captain Candy himself. And what about the game’s hero?

He’s big, he’s got muscles, but he’s not chiseled in stone like some unrealistic superheroes are. It’s a nice change of pace. And as you play, Captain Candy randomly throws a disk at the board, turning a lower symbol to a higher one. That higher symbol will spread throughout the reels and create big wins. Players start with 500 credits. Paylines are fixed, and players can bet between 0.01 to 1.00. After wins, players double their winnings in the gamble feature.

It’s a simple card choice: red or black. Choose the right color card and double your win, or choose the wrong color and lose it all.

Of Note: Make sure gamble is activated in your settings or it won’t be available. Autoplay sets up to 500 spins. You can also set a loss limit and a single win limit that stops autoplay. Autoplay will automatically stop if you earn the free spin level. 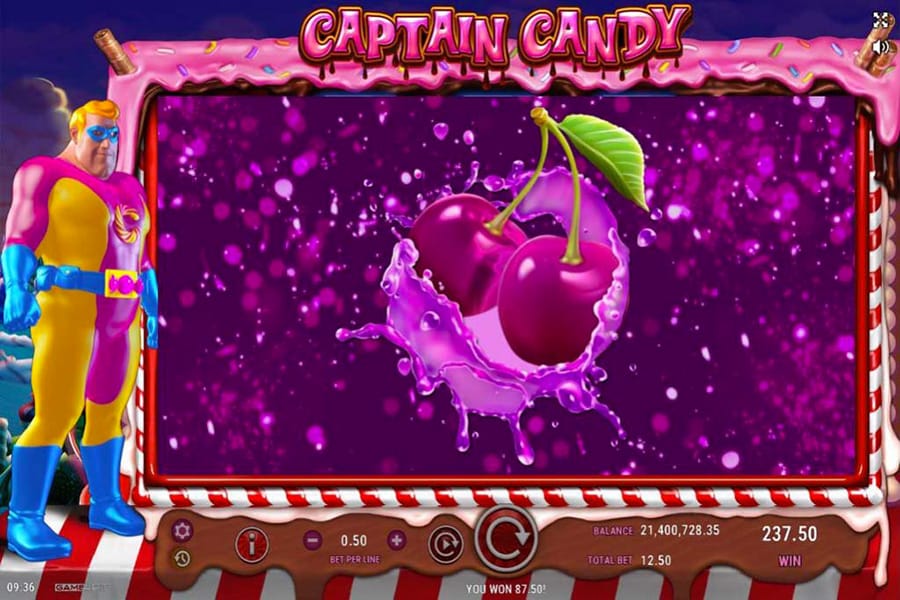 Captain Candy features 10 main symbols. 10, J, and Q all equal the same payouts. K and A go a step higher with the same payouts. Fruits represent the highest payouts. Listed in order from smallest to largest payout, they are blueberries, lemon, orange, strawberry, and purple cherries. The Wild symbol is three gummy bears. The wild substitutes for any symbol except the scatter. The scatter is a set of suckers and caramel apples.

Simple game play and sweet (pun intended) rewards are great reasons for players to play Captain Candy. The game is not loaded with a ton of special features. Bets are also kept fairly low as players are limited in what elements of their bet they can control. But really great animation and a creative lead character make Captain Candy a real crowd pleasure.

for playing with Captain Candy: