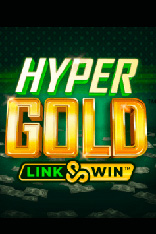 Hyper Gold is the latest release from Gameburger Studios, the up-and-coming new studio powered by the much larger and prolific Microgaming producer. The main headline for this slot is that it runs the link and win game engine, which is essentially a Hold and Win re-spin dynamic that grants players the opportunity to win big jackpots by re-spinning to find special icons. The top prize here comes courtesy of this engine, and at 12,500x the stake is very tempting indeed. Theme-wise, there isn’t much going on here apart from Vegas-like glitz and glamour, which floods the screen with dollar signs and Gold.

The features for Hyper Gold are three-fold. The first feature is more of an added gambling option called the win booster feature. Turning this feature on boosts the amount that you stake by 2.5x.

The game will deposit more casino chips on the reels for this added investment, increasing your chances of triggering the link and win feature. As we have discussed, the link and win feature is a Hold and Win feature under a different name. It is triggered when players simultaneously land six or more of the casino chip icons on the board. Finally, there is also a free spins game. All features will be explained in more detail later on in the review.

The theme for this game feels like a generic game show theme with a touch of casino glamour. There aren’t many clues to anything outside of this. Instead, Gameburger studios have presented this game with lots of flashing lights, crazy gold elements and symbols of wealth and cash everywhere. This game is a lot of things, but it is not subtle. The bright and garish symbols and background almost hit you over the head with their saturated opulence. In this way, this game reflects the old fruity machines which attracted punters with loud music and multicoloured flashing lights.

The background for this game looks like the set of a TV panel show, the wrap-around lights giving the screen studio feel. You half expect a crowd of excited people to be seen at the bottom of the screen. Alternatively, you could say that this background is rather restrained and instead lets the action on the board provide all the visual excitement. Whatever your thoughts, it has been designed and executed to a high standard which players will appreciate.

The playing board is a simple golden rectangle with a dark interior that gives the symbols on the board pleasant surroundings.
The symbols for this game are split into low-value, high-value and special symbols. The low-value symbols comprise the J, Q, K and A in playing card royals. On the other hand, the more valuable symbols are the gold coins, coins and gold bars, piles of gold bars, and Gold $ signs. The dollar sign is the most lucrative of the bunch, offering 25x the stake for the top combination. The specials are the wild, the golden star scatters and the casino chip. The wild is the most valuable symbol in the game, offering payouts up to 500x the stake. It can also substitute for any regular symbol on the board.

Hyper Gold is played on a five-reel, three-row machine with 25 fixed pay lines. To win combinations, players must land three or more matching symbols on pay lines moving from left to right, starting from the leftmost reel.
The betting range for Hyper Gold is 20p to £20 per spin. To adjust their bet levels, players can toggle their stake up and down using the tool located at the bottom left-hand side of the screen.

Further information, including a short tutorial and a display of the paytable, can be found via the menu button in the right-hand corner of the screen. The spin and auto spin buttons are located in the centre of the screen.
Volatility for this slot is rated in the high range. The return to player percentage for Hyper Gold 96.08%, which is about average. The biggest payout that players can win on one spin is 12,500x your stake.

The first feature for this game is called the win booster feature. It is basically an added gambling option that boosts the stake range by 2.5x. The game depots more casino chips per spin for this added investment, giving you a better chance of triggering the link and win feature.

The link and win feature is activated when players land six or more casino chips on the reels simultaneously. These triggering chips will then stay locked to their positions, and you will be given three free re-spins. These re-spins are then carried out with only blanks and more chips landing in a new reel set. If more chips land, they too will become stuck to their positions for the duration of the re-spins, and your re-spins will be reset to three. This continues until either all 15 positions are full of chips or you run out of re-spins.

You’ll notice that each chip has a value on it; however, some chips also have jackpot names on them. At the end of the re-spins, all of these values are totalled and paid out to you in one lump sum. Land three or more of the same jackpot chips, and you’ll also win the corresponding jackpot. The largest of these is the Mega jackpot worth 5,000x the stake.
Finally, there is also a free spins round. The three middle reels are combined during these free spins, and massive 3x3 symbols can fall into it. To trigger this game, you’ll have to land three or more of the golden star scatters on the reels at the same time. Land a 3x3 scatter, and you’ll retrigger the feature.

There is plenty to like about Hyper Gold, with a great selection of features, a really exciting winning potential, and a decent RTP. The link and win feature is obviously the main draw here, however, with the chance to win a selection of jackpots.

Is there a free spins round for Hyper Gold?

What is the betting range for Hyper Gold?

What is the return to player percentage for Hyper Gold?

What is the volatility for Hyper Gold?