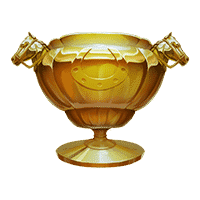 Created by the Habanero studio, Marvellous Furlongs is a horse racing themed game set up in the typical 5-reel 4-row format. Its visual design makes it one of the more attractive horse racing slots out there, which as a group are usually pretty and ugly tacky. There is something very engrossing about the way the slot has been put together that makes it seem very dynamic and exciting even though most of the graphics and visuals are still.

The features for Marvellous Furlongs mostly revolve around the wild symbols in this game, however other features exist too. The first feature that players will notice is the trophy wild bonus. This special symbol can land on reels 1, 3 and 5 and can substitute in for any regular symbol to help form wins. This game also has a moving stacked re-spin feature which moves a stacked wild around the board to help form wins. This demo slots also has a unique feature which relates to the calendar that you will see on screen. All features will be explained in greater detail further on in the review.

As we have already touched on, the theme for this game is horseracing. Whatever your opinions on the sport, the visuals for this game are very impressive. From the hand painted background to the clever leader board-style playing window, Habenero seem to have considered each an every detail. This even extends to the betting options and other buttons on the bottom of the reels which have been made in the shape of betting tickets.

The background for this game is a depiction of a very exciting horserace from the interesting perspective of the outer rail of the course. To the right of the playing board there is one of the stands, in which people are standing and cheering on their favourite horse. To the right, the race itself is unfolding at great pace. The level of detail and the way the illustrator has captured motion in this tableau makes for a thrilling image and a perfect background for this game.

The board has been created to look as though it is a starting gate, with numbers above each reel. The light turquoise colour is also a refreshing choice as a contrast to the dusty surrounds of the track.

The symbols for this game are split into low-paying, high-paying and special symbols. The low paying symbols in this game are the various coloured horseshoes in blue, purple green and red. The more valuable symbols on the other hand are the 4 different jockeys, riding various horses. The only special symbol for this game is the Trophy wild which fulfils multiple roles when it comes to the range of features in this game.

Marvellous Furlongs is played on a 5-reel, 4-row game board with 15 static pay lines. To create winners in this game, players must match 3 or more symbols in combination from left to right on the reels. The betting range for Marvellous Furlongs is 15p to as much as £3,000 per spin. To change your betting level per spin, use the bet adjuster tool located at the bottom of the playing window.

Further information regarding the slot, including a display of the paytable, can be accessed by clicking on the settings menu. The spin button is located to the bottom right of the reels. You can set up auto spins in the game's menu.
The volatility for this slot is rated in the extremely high end of the spectrum. The return to player percentage Marvellous Furlongs is 96.83%, which is slightly above average. The biggest payout that players can win on one spin is 50,920x your total stake.

The first feature in this game is the trophy wild bonus. The trophy wild can land on reels 1, 3 and 5 and can substitute in for any normal symbol to help form new wins.

The second feature concerns the stacked symbol which appears as one of the riders. This symbol triggers the Moving Stacked Re-Spins feature. The symbol after landing becomes a moving wild, moving from one position to another after every re-spin that is granted. Once this symbol reaches the 5th reel it will then disappear off the reels.
The next feature in this game is the Calendar feature. For every 4 spins, 1 day passes on the calendar. Every Saturday you are given access to a free spins round. When the calendar roles around to May however you are given a special edition of the free spins round with extra special consequences.

The normal free spins start with 9 free spins. For this bonus game you are also involved in a horserace. A horse is picked out for you and advances down the track every time that you score a winning combination. Depending on the position that your horse finishes in you can win an extra bonus prize of up to 500 coins.
The special May edition of the free spins is the same but the purse for winning the horse race is raised to 25,000 coins.

If you are into horse racing and slot games this is going to be the perfect game for you. In fact, this slot is a little like playing two games in one with both the slot and the horse racing aspects combined. With some fun features and a decent pay out, players shouldn’t have any reason not to give Marvellous Furlongs a few spins.

How many reels does Marvellous Furlongs have to play on?

This game has 5 regular reels.

The top pay pout available for this game is a generous 50,920x you stake

Yes, Marvellous Furlongs is optimised for all mobile devices.

What is the max RTP for Marvellous Furlongs?

The maximum return to player percentage for Marvellous Furlongs is 96.83%.

What is the betting range for Marvellous Furlongs?

for playing with Marvellous Furlongs: