Iron Dog Studio have recently released the second slot in their Megaways series which uses the game engine from Big Time Gaming. Pirate Kingdom Megaways was the first in the series and this was certainly a great initial offering although it could have done with being a little more adventurous and that is something that the developers have been working on. If you favoured the first slot you will appreciate Megaways Jack even more as Iron Dog has recycled many of the features with some exciting twists. The product is a great looking slot which gives players the opportunity to go back to their youth with a fairy theme and stunning setting.

Images from the fairy tale are used to bring Jack’s story to life and you will see his house which actually looks far more fabulous than the tale would have you believe as well as the famous beanstalk that is pushing up into the clouds to the right. As the reels spin there is a peaceful melody that plays in the background to provide the ambience and bring the entire theme together. 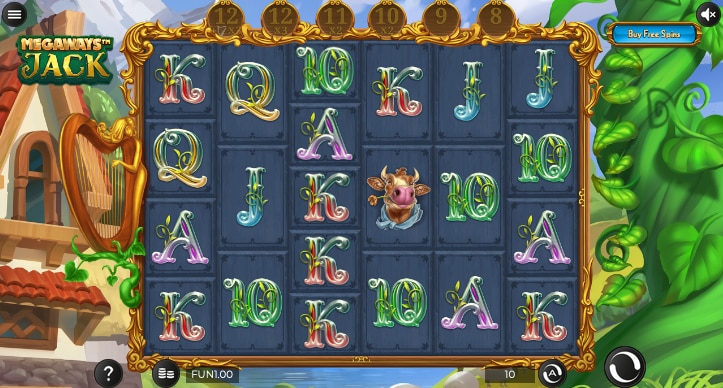 When it comes to Megaways Jack it is not fantasy land for long as one of the major pluses for this slot is the huge potential that is on offer and it can make traipsing through the sweet landscape worth it.
Megaways Jack plays out over a 6-reel Megaways template with 2-7 symbols possible on each. You should be mindful that the horizontal bonus reel does not feature across the top of this slot however, the slot does still offer the complete 117,649 ways to win.

To start your adventure, you need to start by placing your bet which begins when you hit the coins symbol. You can take advantage of the bet range that starts from 20p per spin up to £20 per spin. You can spin your reels either manually or can use the auto spin which is secreted and designed to take up minimal space so that the reels can dominate the game screen.

As there is a large expanse of game screen there is abundant space for some large, vibrant symbols to congregate and initially this means the cascade feature can come into play. The chain of wins continues thanks to the winning symbols exploding and allowing further symbols to drop down into the spaces they have vacated. This is particularly convenient in the base game and gives a boost during the features.

Thought has gone into the symbols and they are well created with a jolly fairy tale look. The lower paying symbols include the usual low paying card symbols 9 through to Ace. When it comes to the higher paying symbols you can expect to come across the cow, the golden goose, the giant, Jacks mum and Jack who is the premium symbol and will pay out 25x your stake if you land six. You only need to land two Jacks for a win; however, all the other symbols pay nothing unless there are three or more. The final regular symbol is the wild which can appear on your 2nd, 3rd, 4th, 5th and 6th reels in the base and bonus games. The wild can also substitute for all regular symbols to create winning combinations.

There are elements in Megaways Jack that are the same as those in Pirate Kingdom, but the developers have also added some other touches. The default return to player remains at 96.20%, although this changes once you active the bonus buys from 95.79% to 96.20%. If you prefer a higher volatility, then you will see that Megaways Jack qualifies for the highest territory.

With the game features there are some elements that have remained the same and some new with the most obvious being the addition of the magic harp that you will see on the left hand side of your reels, and when playing the base game the harp will randomly award and these could include four additional wilds on symbol tumbles, a multiplier of 5x on wins, three extra position on the cloud or the beanstalk or a re-spin where the beanstalk stays in position.
The magic beans are also available in the base game and up to three can appear on every tumble with each bean adding from one to three positions on the beanstalk. With each cascade or feature a leaf lights up on the beanstalk and landing eight or more will activate the free spins.

There are unlimited win multipliers in the free spins and these increase by +1 with every tumble and starts at 1x. Landing seven symbols of the same symbols on a reel and the reel will lock seven high for the duration of the feature. Four consecutive cascades also reward you with +2 free spins and further tumbles over four will add another free spin to a maximum of 4. Whilst in the free spin feature the harp can start to sing and award up to four additional free spins, or as much as x3 added to the unlimited win multiplier.

The final extra, is the Bonus Buy option, and here you can select from 6 – 10 free spins whether there is a locked reel in place. The prices for this start from 30x your bet up to a maximum of 130x.

Megaways Jack could be a fairy tale version of Pirates Kingdom as there are several similarities between the two games. The developers have certainly not cloned Pirates Kingdom as there are the additional feature and a more volatile math model attached to Megaways Jack. The graphics are standard although this slot is more refined and good looking.

When I tried Megaways Jack I noticed that everything has stepped up from Pirates Kingdom. Not only is the slot more volatile but it provides players with a greater win potential of up to 25,000x the stake. The game itself has a high volatility and huge potential and will certainly make you want to give the fairy tale characters a spin.

for playing with Megaways Jack: