The Book of Sheba is the latest release from the developers at iSoftBet and if we are honest the cat has well and true left the bag when it comes to the Book of series of slots from various developers. Who knows exactly how many versions of this slot are out there but iSoftBet thought it was their turn to provide their version with this historically themed slot the Book of Sheba.
Not only is this not the first time for this theme to be used but iSoftBet already own the honour for this type of slot with their Book of Immortals which they packed in the Ancient Egyptian deities. This slot is set in the past and the new graphics and design have taken their lead from the infamous Queen of Sheba slot.

It is true that the Queen of Sheba has gained her famous status thanks to the biblical references, and a whole lot of mystery that surrounds the story. Whilst I could speculate for the sake of this new title, I will stick with the thing the Queen was most famous for, this being her enormous wealth.

The slot plays out over a 5-reel, 3-row grid and sits in the Queen’s stunning palace, surrounded by decorated archways, golden pots, and pillars. gold pillars, gold pots, and some decorated archways. The slot offers a bet range from 10p per spin to £10 per spin and the main rules have remained the same in what must now be at least 10 years. To create winners, you need to land three or more of the lower paying symbols or two or more of the higher paying symbols over one of your 10 pay lines. The return to player is a solid 96% which is standard and in line with competitor slots, and the slot has been listed as highly volatile.

The symbols have been created to respect the past and a look to the future. The low paying royals 10 through to Ace are of a similar design to the original font used in the Book of Ra. When it comes to the higher paying symbols are unique and you can expect to come across a gold brooch, gold mask, a lion, and the Queen who unsurprisingly is the highest paying symbol. If you land five of the higher paying symbols you will be rewarded with 75 to 500x your stake and take it from me, you can land full grids. 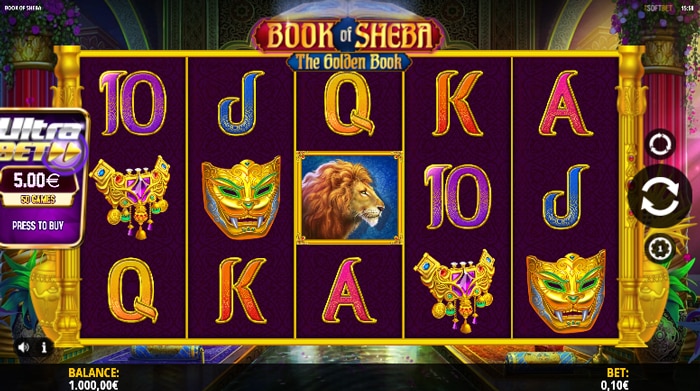 All the “Book of” slots shine when it comes to the Free spins as it is all about the Book symbol. This symbol can appear in the base game and it has two roles which are being a wild and a scatter. When it is in use as the wild it can replace all if the symbols to create winning combinations, and when it is a scatter and you land 3, 4, or 5 you will be rewarded with 2x, 20x, or 200x your total bet respectively, as well as it awarding you with 10 free spins.
Prior to the free spins starting a book flips open and a special symbol is randomly selected. You can reject the first symbol if you wish and you may get awarded a more valuable one, but this is not a certainty, and you have no choice when it comes to the second symbol.

When you play in the free spins feature, if you get lucky and the special symbol is part of a winning combination it will expand and cover the entire reel, better still these symbols do not need to be next to one and other. Therefore, if you were to land a special 10 on your 1st, 3rd and 5th reels the symbols still expand and cover the reels to create wins.
This book slot has a unique twist, and this is that there is the second book wild which is the Golden Book which comes into play during the free spins, and will appear on the 2nd, 3rd, or 4th reel and when it lands, it turns the reel into a golden reel. The gold reel transforms into a special expanding symbol if there is the possibility of creating a win with the symbol. As the golden book is a wild it can substitute for any of the symbols and double up as the scatter in the same way as the other book symbol.
The other reason these book slots have such a big following is because they provide the players with the chance to get one or more retriggers, by landing three or more book symbols anywhere on your reels and this will also add a further 10 free spins to your total.

The final feature that Book of Sheba has to offer is the Ultra Bet. If you choose to use the Ultra Bet button you get to pay 50 games at the cost of 50x your stake. During this feature you may have stars which are lying across the regular symbols ready for you to collect them. Once you have played out the 50 spins, if you have collected five stars or more you will also be rewarded with a multiplier prize which starts from 5x and goes up to 1,000x your individual bet, now that is a good prize! However, just when you thought things could not get any better, when the Ultra Bet feature is active the return to player goes up from 96% to 96.5%.

Book of Sheba is another “Book of” and I get the feeling that when you have played one you have played elements of the others to a certain extent. They are set apart from one another with some small differences and tweaks that the developers have made along the way, and I am pleased to say that the Book of Sheba has a few that you will want to check out.

There is no getting away from the fact that this is a “Book of” just with new elements on offer and I can see why some players may see this as an attempt to ride on the hugely popular type of slot. The new bits though in Book of Sheba make this an interesting game for those who are already fans of this theme and genre, alternatively for those who like to play slots in an exotic setting.

I really enjoyed this game and can happily recommend it as I landed winnings within my first five spins, whether this was luck or skill who am I to know! All I can say is that it is a great looking slot that offers some different game play and well worth a spin or two.