iSoftBet, the UK based developer, has revealed a brand-new side to their slots, a more mysterious creepy slot. Named Night Queen, it is not explicitly said, but the implication of the Queen’s glowing red eyes tells the player there is a good chance that the Queen is a vampire. The mysterious gentleman on the reels could be an admirer or a vampire hunter, who knows. Either way, Night Queen is an edgier dark slot that you do not often seen in iSoftBet releases.

Our initial impressions of this slot are okay, with a reasonable amount of intrigue for the player which is inspired through the unusual setting of the slot. A creepy house is seen sitting at the edge of a lake, as the sun begins to set and night falls across the 5-reel grid, which boosts 20 pay lines. The vibe of the slot is more Victorian, reminiscent of A Dark Matter, but less dark and only a little spooky.

However, Night Queen offers the player a gothic English feel in a scene that looks like it could be from Edgar Alan Poe’s The Fall of the House of Usher, had it been recreated into a slot form. The whole ensemble gives a distinctly Novomatic feel, while being thickly atmospheric. If you do not fall for the visuals of this slot, you may not enjoy the gameplay either, but we shall see! 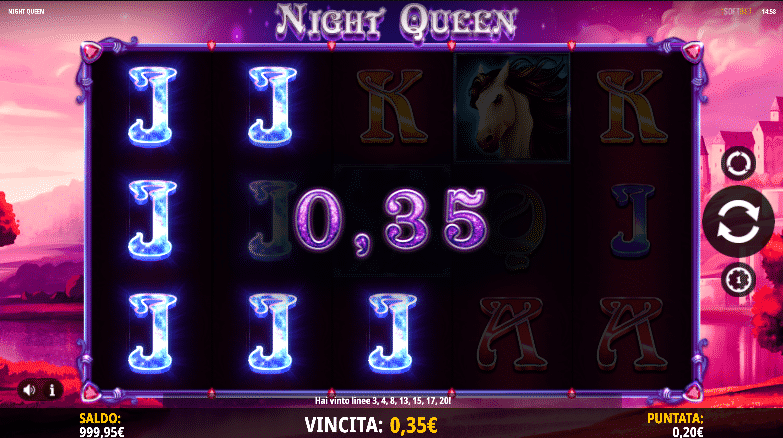 The betting range for this slot is from 0.20 euros at the lowest end, increasing up to 100 euros per spin. There is plenty of room for the player to change their bet to enjoy the best chance of winning big in this slot.

The highest amount the player can expect to win from this slot is 3,723 times the stake. This gives a minimum win of 744.60 euros and a maximum win of 372,300 euros. With an incredible amount of space to move their potential winnings.

The final thing to consider is the math model, with the volatility hovering in the higher range. The return to player for this slot sits around 96.26%, which gives the player a slightly above average change of winning compared to other slots out there. Roughly one in four spins will give you a chance to keep wins steadily rolling in. The biggest win will come in the free spins which theoretically can trigger every 140 spins or so.

Symbols for the player to use

The values for the premiums are not particularly impressive, varying from 3 times to 5 times the stake when matching five of a kind. The wild is the most impressive symbol, popping up to help the player in the form of a jewelled heart; this can substitute for the any symbol on the reels bar the scatter.

Features for the player to enjoy in Night Queen

Night Queen comes with some interesting features which can be triggered in both the base game and the free spins feature. These are Super Stacks, Colossal Multipliers and Switching Stacks.
Switching Stacks means that after any given spin, stacked symbols may be switched with one another in order to create or improve wins for the player. Similarly to this, the Super Stacks feature means that on every spin, one regular symbol could be chosen to become super stacked and this increases the number of stacked symbols that land on the reels, increasing the players chances.

If the player manages to land 3 or more reels of these stacked winning symbols anywhere on the grid, these will merge into one huge symbol that could potentially trigger the random Colossal Multiplier. Once this happens, there is the chance of a multiplier of up to 30 times to be applied to the wins.

The real climax of this slot comes in the form of the Free Spins, which can become triggered when 3 or more of the scatter symbols land on the reels. The number of free spins that are awarded to the player are 10, 12 or 15 depending on whether 3, 4 or 5 scatter symbols respectively land in the grid view.

During the Free Spins feature there is also the addition of the Mystery Symbols. These mystery symbols always land on the reels stacked, meaning they can immediately come into the Switching Stack feature. Their symbols are revealed after each spin, or when any switching may occur. The final benefit to this is that Super Stacks become more abundant on the reels, which increases the frequency of landing them for the player.

Night Queen comes with good and bad points, while unfortunately the latter tends to outweigh the former. Positives of the slot definitely include the atmosphere that the developers manage to bring, and the physical feel the visuals give you. The Night Queen possesses a certain charm and charisma, with her running commentary of the game a highlight.

However, the cackle you head at the end of the free spins is nothing more than annoying, especially if the wins do not amount to a whole lot. The potential and the gameplay are the parts that let down this slot. The Colossal Multiplier could potentially be a game changer for the slot, but it did not appear much in our trial runs. Technically it could be spectacular for the player, with a full grid of Night Queens giving the player 100x.

The best part of the slot is the chance of winning up to 3,723 times the stake, which becomes possible for the player with the 30 times the slot multiplier coming into play. Aside from the stacks of symbols and multipliers, Night Queen is mainly a hit for us for the unique theme that iSoftBet has managed to craft.