for playing with Word of Thot:
TAGS Latest 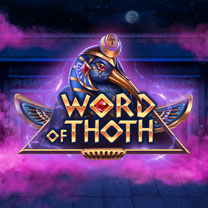 Another hit from Jade Rabbit Studio, the Word of Thoth slot game combines an Ancient Egyptian inspiration with new experiences even old time players will love to get a taste of. An interesting interface, and a whole host of cool features, the Word of Thoth slots is a good one to try for slot players of any and all levels. And if you’re a big fan of ‘Book of the Dead’ games that frequent gambling sites, this is definitely a slots version you’ll want to read more about below.

Set in the ‘Age of Khem’, the game’s design is distinctly Ancient Egyptian. The game has a slight animation to it when the player opens up the game; the atmosphere is suitably ‘spooky’ for a game with a ‘Book of the Dead’ theme, and the soundtrack has a low yet deep ebb to match. The game itself is nice to look at, and the interface is clear to use. Players won’t have trouble using the UI - the colours feel natural and suit the theme perfectly, and the game box is big enough to prevent the animations from distracting.

To get started, players choose their bet. The lowest stake that can be played is 20p, and the highest possible stake stands at £100. The game plays out over a 6 by 4 reel set, and there are 4096 ways of winning in total. The game itself is played in a ‘Cascade’ mode, meaning symbols are removed when collections of them roll onto the board. Match 3+ adjacent symbols in the reels from left to right, no matter what position the symbols land in, and you’ll trigger the ‘cascade’. In doing so, matching tiles ‘explode’ and add money to the winning payout. As you get cascades, the meter at the top left of the game box will slowly fill up; this can also occur when bonus symbols land. If the meter is filled, the player will obtain at least 10 free spins. 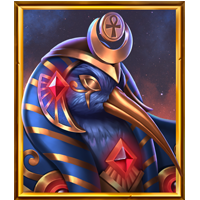 Word of Thoth is a hefty slot game in terms of its features, some of which are unusual to the world of slots and many players may not have seen before. The ‘Meter’ system, for example, can create a sense of jeopardy in the game. It can be hard to fill, but once it has, the free spin potential can seem endless. There is also a ‘Bonus Buy’ option for players to tap into.

The separate bonus game comes in the form of a free spins collection. The player can collect during their playtime in a couple of different ways. First, they are able to fill the meter; if the meter is all the way full, the player will receive 10 base spins, an extra 5 spins, and a 10x times multiplier. Some players will trigger the bonus game when 3 ‘Scatter’ tiles cascade onto the board at once. At this point, the game will count extra spins from the amount the meter has filled - 3 points in the meter means an extra spin and a 3x multiplier, etc.

Word of Thoth is a visually brilliant game that has a high winning potential. Players will love the design, sound, and feel of the game. The cascade mode may cause some general frustration, however, which might take some getting used to for all skill levels.

What is Word of Thoth’s RTP?

Word of Thoth’s RTP currently stands at 96.12%, which is slightly lower than average on the slot paytable.

Are there bonus features in Word of Thoth?

Yes! There’s a free spin mode and a bonus buy feature for free spins per bet.

What is the biggest win you can roll?

The biggest win that can be rolled on Word of Thoth slots is 7384x the original stake.

for playing with Word of Thot: