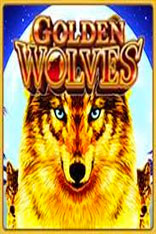 Golden Wolves from the gaming developers at Konami offers 5 reels and 30 fixed pay lines and provides players with the opportunity to submerse themselves in a fantasy world complete with snow-capped magical landscape and mystical native animals. With many cash prizes on offer players are cordially invited to step right into the kingdom of the golden wolf and see for themselves how easy it is to win. The first thing any player will notice that as soon as the free slot games begins they feel far away from home, thanks to the stunning graphics that include ice covered trees and the ground covered in a thick blanket of fresh white snow. Fear not, there is far more to it as this is a world in which beautiful creatures live which the players will meet as they try to land cash prizes.

The graphics that frame the reels are stunning and the game provides a peaceful, serene ambience which begs players to come and play whilst leaving the stresses and strains of everyday life as they escape with the spin of the reels.

Golden Wolves is different to many free slot games as there is no stake per line which means the setup is not what players maybe used to, however it is quite simple and easy to understand. The pay lines are also fixed which means there is no chance to adjust the number of lines you play per bet. The best thing here though is that players get fully control to choose the level that they wish to play at with the entry point that is 45.00 and the maximum bet possible 135.00. However, for the beginner or those who would rather pay with a low amount this slot games can be turned into a penny by changing the coin denomination to 0.01. On the other end of the scale high rollers can set this to 0.25 and this combined with the maximum number of coins.

The game features are an incredibly important part of any casino slots as this is the way that players can really start to rake in the wins without having to lay everything on the line or spend their entire stash all in one go. Golden Wolves is rather disappointing as there is no second screen bonus game which considering the creativeness of the design you would really expect this, but there are still many other extras that can assist the player on their quest for big wins. The first of these is the wild which is most appropriate when you think of the theme of this slot.

Wilds are a feature seen in most online slots and they step in to substitute for other symbols on an active pay line to provide more winning combinations. When playing Golden Wolves players can receive more than just the normal allocation of wilds as there are additional ones that are awarded either during or after the reels have spun. Whilst these extra wilds are the same as regular ones, if they happen to land in the same position along the reels as the free spins symbol they are transformed into one of the available special wilds. Not only can these substitute for all other symbols on the reels in the same way as a regular wild, they can also substitute for the free spins symbols too. If players have landed at least three of the free spin symbols showing they are immediately rewarded with ten free games. If the player lands four this is increased to 12 free spins and for five the reward is a massive 20 free spins.

Wolves are a special symbol for numerous cultures and although they have a dubious reputation they often represent guardianship and spirituality. Regardless of whether the wolves relate to the supernatural or they are just regular animal’s players do have a whole host of wolf related slot machine to choose from. One of current top slot machines is Wolf Run from the developers at IGT, with 5 reels, 40 pay lines, scatters, free spins and multipliers it may give Golden Wolves a run for its money when it comes to game play but it certainly lacks when it comes to the graphics and overall presentation.