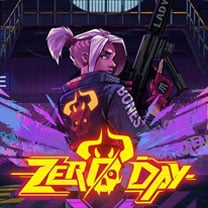 The Mancala studio is taking players to a crazy and multicoloured future for this new game. Mancala’s vision of the future looks like one which was also envisioned by the creators of ‘Cyberpunk’ the console game. Both game’s aesthetics share a colourful yet dystopian world view where gang warfare and vigilante law seem to be rife on the streets. The reels and board are full of robots, drones, and characters with interesting looking laser guns. If Mancala were going for original with this newest release, they certainly got it.

In terms of features for Zero Day, in keeping with the theme, the bonuses are segmented into ‘modes’. These features will not only improve your gameplay but have a directly positive effect on how much money you could be taking home at the end of the feature. These modes include multipliers, a Pick’em bonus round as well as a free spin round which depending on your initial pick, gives you anywhere between 1 to 30 free spins. The Pick ‘em game also comes with an instant cash bonus ranging from £10 to £45.

When imagining the world of Zero Day it is helpful to think of the typical empire vs rebel dynamic you often see in Hollywood films, where some sort of uprising is facing the new fascist overlord in a technologically advanced future. The main character in the game is part of this anti-status quo group that opposes the oppression of the established government or ruling elite. As such she has the trademark outcast tattoos, weaponry and ‘cool’ style. Her environment very much reflects this attitude in that there is graffiti everywhere and machines in disarray. It’s a dynamic that makes it to the screen a lot but not so much to online slot games. Thus, Mancala should be commended for introducing something original to the medium.

The background for Zero Day is a futuristic tube station which been thrown into chaos by whatever crazy warfare or political event which has changed the world forever. Walls of graffiti dominate the background, making for a colourful and dynamic backdrop. Above the reels is a mass of wires and machinery which emphasises the technological dimension of this theme. To the left of the reels is the only character we can see in this game who is a gang warrior holding an enormous ray gun. She lends the only human aspect to this otherwise digital gaming window.

The board looks like a drop-down view of some schematics or blueprints. The overall effect of the board is that it puts one in mind of what Iron Man sees from within his mask as he is contacting Jarvis, his supercomputer. By this we mean there are lots of diagrams and data flow charts to make it feel technology-saturated and futuristic.

There are 9 paying symbols for this game. The lowest paying of these are the metal shapes that look like floating mini drones. These comprise the purple triangle, the blue circle and the orange diamond. Getting five of these on a row pays out at 0.5x your stake. Next up in terms of value are the android and the two-eyed robot, which pay 0.7x your stake for five on a pay line. However, the three-eyed robot and the UV sunglasses robot pay even more. The girl’s image however is the highest paying symbol. Landing five of these in a row pays an amazing 60x your stake. The pink skull is this game’s wild symbol and the flaming bonus symbol is the scatter. Lastly, there is a multiplier symbol which is a 2x is blue lighting.

Zero Day is played on a 4-reel, 4-row game with 1,024 active pay lines. To create winners in this game, players must match a minimum of 3 symbols across a pay line starting on reel 1. To change your betting level per spin, use the bet adjuster tool located at the bottom of the playing window. The betting range for Zero Day is 10p to £90.

Further information regarding the slot, including a display of the paytable, can be accessed by clicking on the settings menu. The spin button is located underneath the centre of the reels. You can set up auto spins in the game’s menu.

The volatility for Zero Day is rated in the low end of the spectrum. The return to player percentage for Zero Day is 95%, a little lower than average. The biggest payout that players can win on one spin has not been disclosed by the game’s studio.

The first feature for this game is the wild feature. The wild symbol in Zero Day is the pink skull, it can substitute for any other symbol barring the bonus symbol to help form a winning combination. This symbol can appear on any reel but reel 1.

The multiplier bonus is applied to your win if you manage to land one of the symbols as part of your winning combination. It will double the value of any win that it is part of. However, only one of these symbols can fall per spin and it will only appear on reel 5.
Lastly, there is the Pick a Box bonus game. This bonus round is activated when 3 bonus symbols land on reels 2, 3 and 4 in the base game.

The bonus game involves 5 boxes, each of which contains a different number of free spins and instant win amounts. The spins range from 1 to 30 whereas the wins vary from £10 to £45. Choosing a box will grant you one or two of these rewards. You will then play your free spins, on which the bonus symbol is not active. This means that the bonus round cannot be retriggered from within the feature. All wins in the bonus round are added up and paid out at the end of the feature.

Fun, futuristic and full of fun features, Zero Day is a real home run from Mancala and something that players will be talking about for some time. The only drawbacks are the same as with any Mancala game, the underperforming RTP and confusing top payout amounts. As slots go though, this is a solid product from the Prague-based studio.

What type of gambling game is Zero Day?

How many pay lines does Zero Day have?

What is the return to player percentage for Zero Day?

Yes, this game is optimised for any device.

Are there wilds in this game?

Yes, the wild for this game is the pink skull icon.

for playing with Zero Day: