The Rite is one of the latest slots to come from the software developers at Mascot Gaming and is sure to be a big hit with players both old and new. Featuring shamans and voodoo dolls the is no getting away from things that are a little creepy and definitely mysterious. The voodoo dolls are the most mysterious of the symbols and when players manage to land at least three of them they have the chance to trigger the bonus where they can choose between all of the dolls that are laid out before the.

Each of the dolls had a coin prize or prize multiplier but picking the Loss doll sees the game come to an immediate end. If players come across three scatters which are represented by the skulls, they will trigger the free spins feature and have plenty of new ways to land prizes.

This horror themed slot provides players with many ways to win prizes by simply landing the same symbols on the 40 pay lines. The overall theme is that of voodoo and everyone knows that voodoo dolls is a practice undertaken in black magic where the dolls are used to make connections with the souls of the victims who suffer the most horrendous pains at the hands of the person holding the doll.

There are just two bonuses, and this is triggered when players find the dolls on the lines and when the feature is active there are some plentiful prizes with the dolls being full of prize multipliers or full of tokens. The other bonus that is very interesting is the free spins, which is triggered when players land three skull symbols in either the base or bonus games.

Design in The Rite 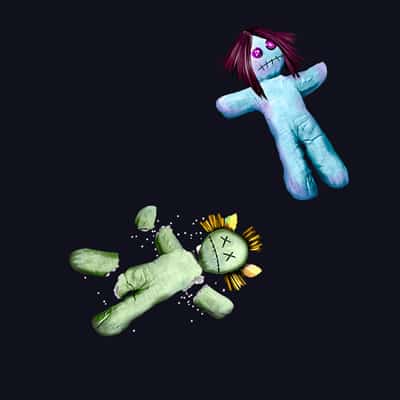 When it comes to the graphics and sounds, they are very neat and well produced and whilst the slot can be played in a demo version players will want to play the slot for real just to feel the whole ambience that the soundtrack provides. The slot is completely enriched by the terrifying aura and the mystic at the same time and the best way I can describe this is a scene that is completely full of black magic.

Once players are ready to play, they need to place a bet and then spin their reels to see whether or not they are a winner, the most rewarding symbol is the wizard complete with a skull mask followed closely by a witch girl and then the knife, all of the other symbols are worth less and made up from the usual letters and numbers of the poker cards.

The bonuses that are on offer in the Rite are a lot of fun and can be triggered in a couple of different ways. The first is for players to land three of the scatter symbols in any position or alternatively by landing three of the voodoo doll symbols. In the first way it is all about the bonus skulls, which when landed will trigger 10 free spins provided that players have found three anywhere on their screen. The other bonus is triggered when the players land at least three dolls on one of the 40 pay lines.

By doing do players are immediately thrown into the middle of a séance where they have to choose some dolls to reveal the prize multipliers or tokens, land the doll which has Loss written on it and your bonus game comes to an end.
The Rite is not the type of slot that will appeal to all as it is dark and rather creepy in places, however whether you are a fan of the occult or not there are some spectacular ways to win and a really good game to be played.