for playing with Hotline 2:
TAGS most-popularresponsive

In 2018, there was the release of a major success for NetEnt: Hotline. This was a high-powered slot that brought rave reviews and people loved it. Following this, NetEnt decided to stick with the same idea, celebrating the 80s with the same concept. This led to the creation of Hotline 2, which a first look appears to be wilder and flashier than the original Hotline. Just as the game that inspired its creation, you join Quinn and Riviera once again on the reels to investigate yet another jewellery theft. The infamous detectives are thrown into action-packed car chases as they battle across the 5 reels and 243 pay lines to find the culprits.
This long-awaited sequel to the original Hotline is not short of any bonuses for the player either. With all your efforts of spinning, Hotline 2 offers the player super rewarding bonuses including Hotline mode, wild reels and expanding wilds; alongside this, we haven’t mentioned the free spins round yet, which will see you benefit from 1,944 pay lines and the chance to win up to 5,184 times the stake!

The betting range for this slot is from 30p up to a whopping £150 per spin, which is a little larger than we are used to seeing in slots. Thanks to this, it does allow all players, from the minimal betters to the high money rollers to enjoy and win bit with!
The impressive betting range is followed with an equally impressive RTP, sitting just above average at 96.05%. While it isn’t the most impressive we have seen to date, it works well hand in hand with the incredible wager to offer the player plenty in return!
With this wager bet and RTP, there is the chance to win up to £777,600 in a single spin, however we recommend checking with your casino just to be on the safe side. 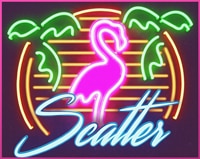 As we expected, the magnificently crafted Hotline 2 by NetEnt sees you soaring through the excellent 80s. Deemed one of the most eventful decades the world saw, the 1980s makes even that seem like an understatement. The birth era of personal computer, mobile phones and so much more that we cannot even begin to imagine living without today. Seen as a magical yet strange time for all, the 1980s is perfectly simulated in Hotline 2 and brought to life for those who lived through it and those who can only look back at it.

Those who look back on the 1980s with nostalgia, and let’s face it – that is probably most of us, Hotline 2 throws you into the flashiest strip of Miami with Riviera and Quinn, two hard-working detective who are hot on the heels of career criminals who have left behind a string of jewellery heists in their wake. Looking at the visuals, there is much that is similar to the original Hotline. The reels are set against a backdrop of Miami, with the ocean and a luxury-looking building fading in the distance.
The reels themselves are populated with rings and other pieces of jewellery as well as a man in a microphone set. Of course, alongside these, we have the two detectives Quinn and Riviera. As you spin the reels, you can listen to silence or turn in to the retro 80s-insipired soundtrack which only served to add to the nostalgia of the slot.
During your spinning session, you will be aiming to land more of Kitty Weiss’s symbol as she is the most rewarding on the reels. When matching five on a winning pay line, you will receive 2.66 times the stake. Another of the symbols you may wish to encounter is the cars wild symbols, which will land on reels 2, 3 or 4.
As expected, the wild will substitute for other symbols; they will turn into expanding wilds when they become part of a winning combination. 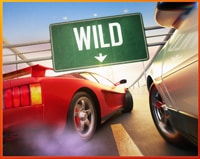 Hotline 2 has three bonus round which include the Hotline mode which is triggered when replacing the wild symbols which have landed on special hotline zones across the reels. As this point the wilds will fully expand and cover a multitude of reel positions, as well as full reels!

The game’s third reel acts in this slot as hotline, and you can turn more reels into hotline zones using the double and triple bet options. If you use the triple bet your 2nd, 3rd, and 4th reels are hotline zones and will treble any wins. Alternatively, if you choose to use the double bet your 3rd and 4th reels are hotline zones and double winnings.
Even more rewarding is the hotline bonus as the wilds will appear and you may land three completely wild reels which bring fantastic win opportunities. However, central to this slot is the free spins round which is activated by landing three or more of the neon flamingo scatter symbols on your hotline zones in the base game. When this feature is active you are rewarded with 7 free spins and the wilds are also an important addition to this feature. Each wild that you land on the hotline zones increase the height of the reel by one symbol which means more ways for you to win and the wilds also expand to offer wild reels.

As the top height on the reels are six symbols in the free spins feature you have 1,944 ways to win instead of the 243 pay lines in the base game. When the reels expand to their maximum you are rewarded with an additional 2 free spins giving you 13 free spins to play for.

Hotline 2 is an amazing sequel which offers superb graphics, a fitting retro soundtrack and excellent, generous bonus features. It is not that often when a sequel trumps the first release however, this is one of those slots.

I enjoyed playing this slot, the game play was quick and pay outs frequent. Personally, I would rate this slot as a solid 9/10 as everything about it is expertly delivered and there is plenty of action to keep the slot progressing at a great tempo. I would highly recommend this slot to all players as it is the perfect way to while away a few hours and the chances are you will come away with some extra money in your bank which is the best result any players can ask for.

for playing with Hotline 2: