Rage of the Seas

Overview of Rage of the Seas free slot Netent

Rage of the Seas is one of the latest slot releases from the gaming team at NetEnt which takes players down into the deep dark waters of the seas in this atmospheric pirate themed slot. While the theme is nothing new NetEnt have proved how talented they are by using their expertise to create a slot that is refreshing and far away from the norm. From the theme to the overall presentation there is something new that you will not have seen before. 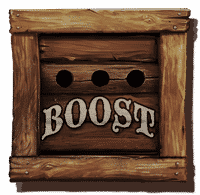 The design of this slot starts with the back end of a ship where there are fish, skulls and lanterns surrounding the 5-reel game area that provides 1,024 ways to win. When the features are activated the camera zooms out to provide a larger area of the ship and show the sails and masts as it intensely ploughs through the cloudy waters towards the huge black clouds in the distance, and all I can say is are there storms moving in or is it war?

The backing track is the perfect complement to the stunning visuals as it reaches a crescendo as the wins rack up. The musical arrangement is by far one of the most pirate sounding to be heard in a slot in a long time. The slot has its own authentic and seedy feel to the point where you can almost smell the rum and hear the peg leg tap every time the reels spin. This may be going a little too far however losing yourself in a while is not a bad thing and just like losing yourself in a nautical classic tale.

When it comes to placing your bet, you can play from just 20p per spin up to a maximum of £400 per spin which is such a good range this is sure to attract all types of players. The slot has a math model that is akin to a medium volatility and the return to player has a decent average default that stands at a respectable 96.04%. When you play in the default mode which is the 5x4 grid, the slot offers 1,024 ways to win, however when the features are in play the grid can expand and the ways to win increase dramatically. Read on to find out how.

Rage of the Sea Symbols 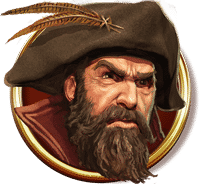 The developers have certainly gone all out in the design of this slot and used every type of pirate paraphernalia you can think of particularly in the way the symbols have been designed. There is a total of 10 regular symbols with 6 low paying and 4 high paying. The lower paying symbols are the bottles of rum, ship wheels, barrels, anchors, hammerhead sharks, and parrots. Landing a line of the lower paying symbols will reward you with wins of 0.4x up to 0.75x your stake.
There is a little more on offer with the 4 higher paying symbols and you can expect to come across two male and two female pirates, with one of the females bearing a close resemblance to a dark-haired Cameron Diaz. These characters are worth from 1.25x to 2.5x your stake. Across the pay table you will see that the symbols are low across the board however thanks to the features and expanded reels things look a lot brighter.

Rage of the Seas: Features

Rage of the Seas is not just crammed full of pirating imagery, but it is packed full of features too, such as the cannons on a galleon. This is yet another slot that is not the easiest to follow in words, but I am doing my best to explain it all as clearly as I can. As such I can say that the features can be placed into three main areas, these being the free spins, boost feature and modifiers.
The highlight of all of the features has to be the free spins which you can activate in two different ways either by landing three boost symbols in the feature spins or base game or when you land 3, 4, or 5 scatters anywhere on your reels and by doing so you will be rewarded with 5, 8, or 12 free spins respectively. During the free spins you will benefit from your reels being completely expanded for the whole round, and better still the three random modifiers remain active too. If you have any feature spins outstanding when you activated the free spins these are added to the free spin amount.

The Boost symbol will only land on your 2nd, 3rd, and 4th reels and when they land the boost feature is triggered. One the feature is activated there is a monkey that appears to open a window above the reel where the boost symbol has landed, this see the reel expand to 7 rows in height and this also rewards you with four feature spins. These feature spins are just paid spins with an active random modifier. If you land more Boost symbols on your other reels in the feature spins this too will expand, and a further four more feature spins are added, and a new modifier triggered. If a boost symbol lands on a reel that is expanded, you are rewarded with another two feature spins being added to the remaining number. Expanding reels mean that you have more ways you can win, 1, 2, or 3, expanding reels will provide you with a massive 1,792, 3,136, or 5,488 ways to win.

There are five modifier extras in Rage of the Seven Seas and each has its own corresponding flag which waves in the wind from the side of the boat when it is active, and are made up of one of the following. First are the spreading wilds where you will see 1x1 sized wilds on your 2nd, 3rd, and 4th reels and will reward you with up to 2 additional wilds anywhere other than your 1st or 5th reels. Next comes the stacked wilds which is a stacked 1x4 that can land on your 2nd, 3rd, and 4th reels. The major reel upgrade removes all the barrel and anchor symbols to create way for bigger wins, the minor reels upgrade removes the bottle and the steering wheel symbols and finally is the multiplier which will multiply all wins x2.

Rage of the Seas: Conclusion

Rage of the Seas is a classic slot that show some resemblance to Hotline 2 by NetEnt, such as the expanding reels and some excellent graphics combined with an epic soundtrack. Although there are a few similarities Rage of the Seas does offer a unique gaming experience of its own.