for playing with Agent of Hearts:
TAGS Latestresponsive 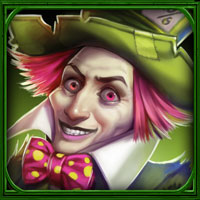 Agent of Hearts is one of the latest free online slot machines based on the children's classic Alice in Wonderland, written by Lewis Caroll. This theme has been used for multiple slots over the years and seems immortalised as an aesthetic close to designer's hearts. However, this game, designed by Play' n GO, is a little different in that its playing dynamics are just as unusual as the characters portrayed on the screen. Please find out more about this bonkers slot in the rest of our review.

When it comes to features for this game, there is quite a selection. These begin with the cluster win feature, triggered when you find a winning cluster. The winning symbols are blasted off the reels and replaced by a new set, giving you multiple chances to score wins from the same spin. Next on the feature list is the Random Heart Wilds feature, which drops wilds onto the reels after random winless spins. The various Agent features are also involved in this game, triggered by landing multiple combinations with specific symbols in them. Finally, there is also a free spins feature. All features will be explained in more detail later on in the review. 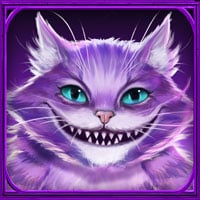 As you may have already deduced, Agent of Hearts is the 3rd in a series of games from Play n GO called the Rabbit Hold Riches series. Each game (based on the Alice in Wonderland story) has a slightly different narrative. The story set up for this game is that you and a team of 'Agents' are trying to find the keys to the Queen of Heart's heart to unlock it and enjoy the riches of Wonderland. However, there are many twists and turns in finding these keys, and the game doesn't make it easy for you. Aside from that, things are as surreal and bizarre as you might think, considering that this is still an Alice in Wonderland themed slot.

The background for this game is a rather dark depiction of Wonderland. To the left and right of the playing screen is a shadowy field populated by ominous trees that look similar in shape to the iconic Acacia tree, yet bushier and more foreboding. They sit under a murky sky whose thick clouds portend rain. Behind the reels is some sort of structure made from an enormous cupcake that is par for the course in the strange world of Wonderland. Floating around the screen are also teapots and cups, which seem to have been enchanted to levitate eerily. The design is very much Tim Burton rather than Disney.

The board being a cluster pays board is rather large and quite complicated in that to the left, you have the four characters that trigger the agent bonuses, and at the top is the Queen of Heart's heart. The rest of the board is straightforward and covered in decorative filigree features.

The symbols are split into lower-paying symbols, high paying symbols and special symbols. The lowest paying symbols in Agent of Hearts are the 4 gemstone icons of various colours. The higher paying symbols, on the other hand, are the character symbols. These include the Dormouse, Caterpillar, Cheshire Cat and the Mad Hatter. The most lucrative of these symbols is the Mad Hatter. Landing 5 of these icons together pays out at 2.5x your stake. However, scoring a 15-symbol cluster of these pays out at 1,000x your stake. The specials for this game include the various character wilds, and the key scatters used to trigger the free spins round.

Agent of Hearts is played on a 7-reel cluster pays grid in the format of 7x7x5x5x5x7x7 rows high. To win combinations in this game, players must match 5 or more symbols together in a cluster.

The betting range for Agent of Hearts is 20p to as much as £100 per spin. To change your betting level per spin, use the bet adjuster tool located at the bottom of the playing window.

Further information regarding the slot, including a display of the paytable, can be accessed by clicking on the settings menu. The spin button is located to the bottom right of the reels. You can set up auto spins in the game's menu.
The volatility for this game is rated at the very high end of the spectrum. The highest return to player percentage for Agent of Hearts is 96.25% (about average). The biggest payout that players can win on one spin is 5,262.5x their stake.

There are a total of 7 bonus features in this game. The first of which is the cluster wins feature, which works similarly to a cascade feature. Whenever you create a winning cluster in this game, the feature is activated. It blasts the winning symbols off the reels and makes a new payout consideration. A new set of symbols then fills the vacant positions of the previous set. These cascades keep occurring until the new set of symbols does not form a win.

The second feature in this game is the Random Heart Wilds feature. After any random winless spin, this feature can trigger and delivers between 4 and 7 wilds onto the reels. After the deposit, a new payout calculation is made.
The next set of bonuses are called the Agent features. These bonuses concern the four-character meters to the left-hand side of the screen. To fill these meters, players must land winning combinations with 1 of these 4-character symbols included. These symbols are then collected in the appropriate meter. If you fill all 6 positions on the meter during a single spin and the following cascades, you will activate the following bonuses depending on the characters collected.

The Cupcake Splat feature: the Dormouse scurries across the reels from top to bottom. As he runs, he deposits a trail of cupcake bombs. When these explode, they will remove the symbol and create a symbol drop or transform into a new symbol.
The Smokin' Phat feature: the iconic smoking Caterpillar blows 1, 2 or 3 trails of smoke diagonally across the game grid. When the smoke clears, symbols will have been removed or transformed into a new symbol.
The Grinning Cat feature: the smiling Cheshire Cat grins, which will then either remove the symbols beneath or transform them into a random symbol.

Mad Hat feature: between 6 and 9, Mad Hatter hats are settled onto the grid. These hats then spin, which removes adjacent symbols to create a new symbol drop or transform into new symbols.

The White Rabbit can also appear at random on any spin to award an Agent feature. If you land more than 1 Agent feature on the same spin, the modifiers play out in the above order. Each symbol meter resets on each new spin.
Finally, this game's free spins feature is activated by landing 3 of the key scatters on the reels simultaneously. The game will then award you with a single free spin. During this spin, each of the agent features plays out in turn.

When all of these features have been played out, the game deposits a 3x2 Megawild onto the board to give you one last attempt at triggering some cascades.

The third slot in this exciting and weirdly entertaining series of games delivers a terrific gaming experience. This is due to the well-designed aesthetics and the awesome features that make every level of the gameplay more multidimensional. Cluster pay slots are also more exciting for some gamers because of the number of symbols involved. A decent RTP makes Agent of Hearts a decent prospect for wins too.

How many reels does Agent of Hearts have to play on?

This game has 7 reels to play on.

Yes, Agent of Hearts is optimised for all mobile devices.

What is the max RTP for Big Agent of Hearts?

The maximum return to player percentage for Agent of Hearts is 96.25%.

What is the betting range for Agent of Hearts?

for playing with Agent of Hearts: