Annihilator is a band from Canada, and they are one of the forerunners of that genre which has never stopped evolving. This slot from the game developers at Play “n” Go have also continued to improve their slot offerings and this certainly shows in this slot. Annihilator is complete with several of the tracks that the band have released and they are the perfect accompaniment for the high variance offered by this slot.

As well the standard base game Annihilator offers a pick me bonus game and free spins bonus plus an extra feature in the form of a reel modifier that is the inspiration for some of the symbols to expand and this is then followed by the reel re-spins with a guaranteed win.

The band play a certain style of music and if you have heard any of their music you will appreciate that they are hard faced with their music translating into the episode that is death and total demolition. The name of the band is a giveaway to what the frontman and founder has been inspired by.
It will come as no surprise that there are some rather creepy looking symbols and you can expect to come across chained guitars, broken paintings, Alison who has been scared almost to death by the boogieman as well as other picture styled symbols. The lower paying symbols are created from the usual playing card royals that are splattered in blood and have the look of an old iron blade.
This slot is well designed and not as gruesome as it may sound however, the artistic essence of the band needs a gloomy theme but the adventures you are offered on the reels makes for an edgy game experience particularly for fans of the band.

Annihilator offers players 10 pay lines and although this is synonymous of Sabaton the slot but different to Testament which offers 243 ways to win. Regardless this slot will provide you with a thrilling experience coupled with a maximum win of up to 5,000x as well as a random reel modifier complete with expanding wilds, the free spins bonus with cloning and shifting wilds and a pick-me bonus game, in other words something for everyone!

Before you can join this Canadian thrash, metal band, and embark on your adventure you need to select your bet from the sliding scale that is situated on the bottom of your screen. By using the plus and minus buttons you will be provided with all the bet options that are available for you to choose as your bet per spin. The smallest amount you can bet is 10p per spin to a maximum of £100 per spin. 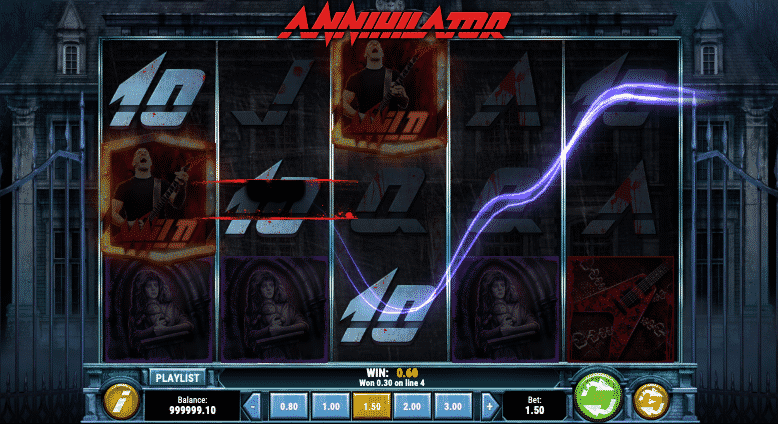 As the 10 pay lines are fixed, it means that the game offers a pay line stake of 1p per line or £10.00 per line.
When you have decided on your bet level and this is locked in you are ready to press on the green spin button which you will find in the bottom right of the game screen area, and your reels will start to spin, however if you want to sit back and watch the game unfold before you, set the auto play function using the smaller round button in the corner of your game screen. When using the auto play function, you can pre-set the number of spins and when you want the reels to stop.

There is an optional stop on bonus feature trigger, stop on a specific single win increase, balance decrease and so on just to add excitement to the auto play function.
When you want to learn more with regards to pay outs just hit the “i” button as this will take you to the pay table and provide access to all the gaming information.

To land a win you need to land three or more of the same symbols running from your left reel, and wins can be landed on any or more than one of your pay lines. The wild is an image of Jeff Waters, the band’s founder and this symbol can substitute for all other symbols apart from the scatter and bonus symbols. As well as creating substitutions when you land five wilds on one pay line you will be rewarded with a multiplier equal to 40x your win.
Alice appeared in the band’s debut album entitled Alice in Hell, and she will reward you with 30x the amount of the win.

When playing in the base game you may feel that the slot lacks polish, but once you land the bonus features you will see that they strike a perfect balance between the high variance and lower pay outs when you land less than five of the same symbols. The reel modifier is triggered at random in the base game to turn a reel into an expanded wild. If you then land a win the game continues and the game carries on with the following spin, but if there is no win the reels will re-spin with the wild locked into until you land a win.

The free spins bonus is activated when you land three or more of the scatters anywhere on your reels and this will award you with 8 free spins with the chance for the wild to expand every time it lands on your reels. Better still the wilds are energetic and can move around all over your reels. This is the highlight feature of this slot as you can land expanding wild reels which clone themselves if the wilds return to the position it had before. If you land the scatter it rewards you with an extra two free spins.

The pick-me-bonus is activated when you land three doll symbols on your three middle reels. You then choose from the dolls on your screen to land a prize which is between 1x and 50x your winning bet. If the doll you choose has a prize that is up to 5x you can choose again to see whether you can land a better prize, and there is a chance that one of the dolls may be hiding the free spins bonus, land this and it will start straight away.

Although Annihilator only offers 10 pay lines, but it knows how to pack a great reel adventure. Offering a return to player of 96.2% but this should be checked if you are playing outside of the UK as you may find that the RTP is far lower. Regardless of this I enjoyed the slot immensely and with one-reel modifier and two bonus features and a maximum pay out of 5,000x what more is there to like?