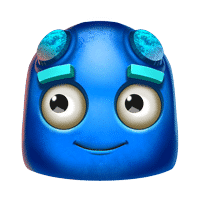 Created by the wonderfully imaginative studio, Play 'n GO, Dr. Toonz is a fantastic new game that takes place in a cartoon laboratory where bizarre multicoloured creatures are being grown in test tubes. The test tubes are this game's reels, and the amorphous creatures within them are the symbols. Presiding over this science fiction theme is Dr Toonz himself, who sits to the left-hand side of the screen, looking a little like Albert Einstein. This game has plenty of features, a tremendous dynamic payways mechanic and little creatures that you are sure to fall in love with.

Speaking of the features in this game, Dr Tooz has quite a variety. These begin with the cascading reels feature, which comes into play every time a win is registered. When triggered, the winning symbols are jettisoned from the reels and immediately replaced by a new set, giving players multiple chances to score wins from the same spin. Next up are the various Quantumeter features related to the meter to the side of the board. When fully charged, a range of modifiers can be triggered, which help to form more wins. Finally, this game also has a free spins feature. All features will be explained in greater detail later on in this review.

Players may remember that Play' n GO had a range of slots with the title Reactoonz. These games featured a range of zany blob-like creatures that popped and slid all over the reels. This game is about the origin of these blobs and their mad scientist father. The whole theme is very sci-fi with hovering platforms, strange scientific paraphernalia and a setting that looks to be in some sort of underwater lair.

The background for this slot game is the futuristic laboratory that these toonz have been created in. To the left and right of the test tube reels, players can see alien equipment of all descriptions, from aerials to screens and bubbling potions. Above these items, players can see what seems to be an enormous dome, like a glasshouse. However, from what players can see through the glass panels, one can infer that this dome structure is located at the bottom of the sea. This is precisely the right flourish for a setting as strange as this.

The board has been cleverly designed to represent a set of tall test tubes that perfectly fit the fun sci-fi theme and the narrative of breeding these strange creatures.

The symbols are split into low-paying, high-paying and special symbols. The low-value symbols for Dr Toonz are the four aliens with one eye. Above these are the aliens with two eyes. The most valuable toon on the board is the purple one which pays up to a maximum of 1x your stake for the top combination of 6 in a row. On the other hand, the specials are comprised of firstly the atom, which represents the wild icon. In addition to substituting for other symbols to help form wins, the wild also pays out at 2x the stake for the top combination. The other special is the DNA helix, which represents the scatter. This icon helps to trigger the free spins game.

Dr Toonz is played on a 6-reel, 4-row playing board. This game uses what is called the Dynamic Payways mechanic. This means players score wins by landing combinations of the same symbol in three or more across adjacent reels, starting from reel 1.

The betting range for Dr Toonz is 20p to as much as £100 per spin. To change your betting level per spin, use the bet adjuster tool located at the bottom of the playing window.

Further information regarding the slot, including a display of the paytable, can be accessed by clicking on the settings menu. The spin button is located to the bottom right of the reels. You can set up auto spins in the game's menu.
The volatility for Dr Toonz is rated in the extremely high area of the spectrum. The return to player percentage for Dr Toonz is 96.25%, which is about average. The biggest payout that players can win on one spin is 22,000x your stake.

The first feature in this game is the cascading reels feature. When you score a winning combination, this feature is triggered. It removes the winning symbols from the reels and replaces them with a new set. This provides players with additional chances to score wins from the same spin. The process continues until the new set of symbols creates no new wins.

Finally, this game also has a free spins bonus triggered by landing three or more of the DNA helix scatters on the reels simultaneously. The more scatters landed to trigger the bonus, the more free spins you are granted to take into the round. The Quantumter begins at a higher charge level in the free spins round, making the other features easier to trigger.

Dr Toonz is a sci-fi adventure that you are unlikely to forget with a terrific set of features, plenty of pay lines, and a top payout that will have players queuing up to play. RTP is pretty promising. However, the high volatility could make things a little unpredictable

How many reels does Dr Toonz have to play on?

Yes, Dr Toonz is optimised for all mobile devices.

What is the max RTP Dr Toonz?

What is the betting range for Dr Toonz?

for playing with Dr Toonz: