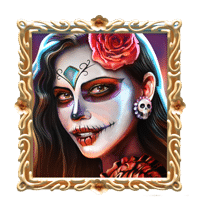 Play ‘n GO is celebrating the Mexican holiday of the day of the dead in their new slot Muerto en Mictlan. Indeed, the famous slot designer transports players to a secluded Mexican town where festivities are in full swing. This means painted skulls, garlands of flowers to remember the dead and streets decorated in a riot of colour. In addition to the exciting visuals and fun gaming dynamics, this game also has a great selection of features and potential for some really terrific payouts that range up to an awesome 10,000x your stake.

The features in this game are twofold. The first feature is the win multiplier feature which is triggered randomly. When it is, it subjects your win to one of three multipliers 1x, 2x or 4x. However, during the free spins round, these values grow to as high as 30x. The other feature in this game is the free spins game triggered by landing a spirit scatter on a minimum of three reels. Unlike conventional free spin rounds, this feature has several levels players need to work through, with each level being more valuable than the last. All features will be explained in greater detail later on in the review.

As we have mentioned, the theme for this game is the day of the dead – a Mexican festival that happens on the 1st and 2nd of November each year. The festival is in celebration of those who passed. Although the festival is similar to Catholic festivals such as All Saints’ Day, The Day of the Dead or Día de Los Muertos is tonally much different. Rather than a solemn remembrance of the dead, the Mexican festivities are much more upbeat, with a thankful and joyous vibe that means the event is usually accompanied by food, wine, and dancing. Play ‘n GO have done well to represent this in the visual element of this game.

The background for Muerto en Mictlan is a town one assumes in Mexico. Players will see a street littered with beautiful and bright flowers, banners, and bunting in loud colours that reflect the party atmosphere. However, the image is one of aftermath rather than a party in progress. As such, players won’t see any people or actual festivities on the screen, rather the remains of a celebration that may have happened the night before.

The board for this game is a kind of ornate green gravestone sectioned into reels for the purposes of the game. This fits perfectly with the tone and theme of the game.

The symbols for Muerto en Mictlan are split into low-paying, high paying and special symbols. The low-paying symbols are the spade, diamond, heart and club card suit symbols. The most valuable of which is the club, paying a maximum of 5x the stake for the top combination. On the other hand, the higher value symbols are the top hat, rose, Catrin (the male party guest) and Catrina (the female party guest). Catrina is the most valuable regular symbol in the game, paying out at 25x the stake for the top combination. Finally, the specials are the skull wild, the spirit scatter, the expanding wild, the exploding wild, the sticky wild, and the walking wild. Each of these is depicted as a slightly different variation of decorated skulls. 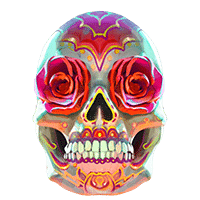 Muerto en Mictlan is played on a 5-reel, 3-row machine with 10 fixed pay lines. To win combinations, players must land three or more matching symbols on pay lines moving from left to right, starting from the leftmost reel.

The betting range for Muerto en Mictlan is 10p to £100 per spin. To adjust their bet levels, players can toggle their stake up and down using the tool located at the bottom left-hand side of the screen.
Further information, including a short tutorial and a display of the paytable, can be found via the menu button in the right-hand corner of the screen. The spin and auto spin buttons are located in the centre of the screen.

Volatility for this slot is rated in the medium to high range. The return to player percentage Muerto en Mictlan is 96.2%, which is about average. The biggest payout that players can win on one spin is 10,000x your stake (excluding progressive jackpot).

The first feature in this game is the win multiplier feature. Sometimes when you land a winning combination, it will be randomly boosted by one of three multiplier values. These are 1x, 2x or 4x. However, during the bonus free spins, the multipliers can reach much higher values.

The free spins in this game are the main feature. These are triggered by landing three or more spirit scatter icons on three or more reels. The free spins then begin with 5 level 1 free spins. You should always be on the lookout for additional scatters during these free spins, as these are collected to break through to levels 2, 3 and 4, which will, in turn, grant you more spins. You can earn up to a maximum of 20 free spins if you play your spins right.

You need a certain number of collected scatters in each level to progress to the next level. The advantage of going up levels is that the multipliers that are available grow in size, boosting your wins to ever-higher payouts. You need 5 to get to level 2, 11 to get to level 3 and 18 to get to level 4.

You will also need to choose one of the four wild features to be active during your spins at each level. However, remember that once you choose a wild feature, it will not be available for the next levels. The wild features are explained below:

You sure will be celebrating like it’s the Day of the Dead if you manage to get to level four of the free spins game. However, Muerto en Mictlan is more than just free spins and multipliers. It is also an enjoyable slot with some great graphics and a theme that is perfect for this time of year. Enjoy and remember to count those scatters in the bonus game.

Is there a free spins round for Muerto en Mictlanis?

What is the betting range for Muerto en Mictlanis?

What is the return to player percentage for Muerto en Mictlanis?

What is the volatility for Muerto en Mictlanis?

The volatility for this game is in the medium to high range.

for playing with Muerto en Mictlanis: