Although it may appear that the developers at Play ‘n’ Go have been plodding along and never getting out of neutral they have managed to produce this stunning slot which is complete with solid statistics and exotic features. This Norse themed slot provides players with the potential to and a maximum win of 5,000x their stake and offers multiplier free spins, trigger free spins and Draupnir re-spins.

The developers at Play ‘n’ Go have recently released some slots that have been based around Egyptian mythology, but it has been quite a while since they have released a true crowd pleaser which is based on Norse mythology, however you have no need to wait any longer. This Norse themed slot focuses on Odin the King of Asgard and if you ever feel like playing a slot with a superhuman character then Odin is the one to choose. If I had to choose one theme to stir up my passion it would be that with Norse mythology. There is just one downside for developers though and this is that if the theme is created in a faint-hearted way it’s not great but Play ‘n’ Go have proved yet again how worthy they are when it comes to huge titles.

Design wise Ring of Odin is stunning and executed perfectly to create a superb slot. The static imagery in the backdrop is paired with smooth animations which add a certain something to proceedings, which is something that all good slots need. With the slot being based around Odin he is as you would expect one powerful looking dude. 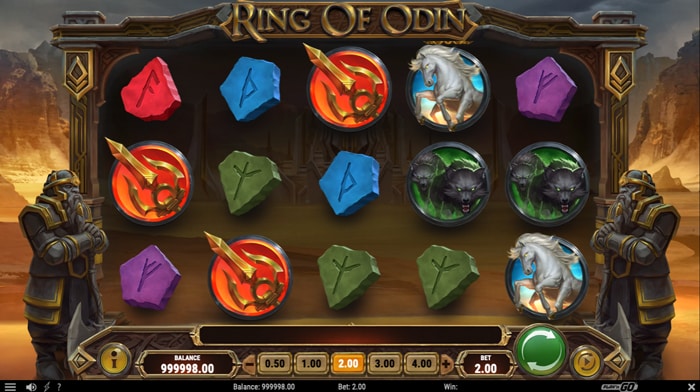 How to play, symbols and placing your bets

Ring of Odin plays out using a grid that has 5-reels, 3-rows and 10 fixed pay lines, it really is that easy and the slot rules follow this simplicity. You can create winning combinations when you land three or more matching symbols that go from left to right on any of your pay lines. When it comes to the symbols, they are rather creepy but representative and in keeping with the theme. The lower paying symbols are created using rune stones which are either red, blue, green or purple with the higher paying symbols including ravens, wolves, a horse with eight legs, Odin’s spear Gungnir which is the highest value and will reward you with 30x your stake if you land five on any pay line. Odin is the wild and he has the same value as the spear.

When it comes to placing your bets, you can wager a minimum of just 10p per spin to a maximum of £100 per spin which means that this slot will appeal to most players. The return to player can vary and has a default of 96.20% but this can drop to and lowered to 94.2% depending on where you decide to play. Remember to check this before you start using your coins. The volatility is not as high as it could be and is rated by the developers as a 7 out of 10, whilst this is quite high it does have space for the features to shine through.

When it comes to features Ring of Odin offers several which can open in your normal game and some that will appear at random as well as those which you need to activate. In the base game there is the Odin’s Ring feature which can be activated on any spin and then any symbol that lands within it will become the chosen one. You will then be rewarded with a re-spin with the grid covered with Odin’s Rings. If the symbol that was originally chosen then lands in one or more of the rings, they will activate the Draupnir Re-spins. The number of symbols you landed in Odin’s Rings are the number of re-spins that you will be rewarded with up to a total of 9. When playing in the Draupnir Re-spins the chosen symbol is duplicated on reels 2, 3 and 4 for the entire duration of the feature.
There are two types of Free Spins on offer in Odin’s Ring. The first is the standard free spins bonus that comes into play when you land three Odin’s eye scatters on your 1st, 3rd and 5th reels. You start with 4 spins and any subsequent scatter that you land adds an addition 1 free spin to the round. During this free spins Odin’s Ring is always active.
The enhanced multiplier free spins are activated by Odin’ Ring. If the ring appears on your game screen and you also land a scatter within it this activates the 4 multiplier free spins. In this feature if you land the scatter on your 2nd, 3rd or 4th reel and you will then be rewarded with a single free spin. Any further scatters you land will add +1 to the multiplier with the maximum being nine. When this feature is active any scatters that land give you an additional one multiplier free spin and the multiplier stays active for the entire round.
It is difficult to describe the features however you will soon get a grip in them as once you have seen them in action everything will make sense. The final point worth a mention is that the features in Odin’s Ring can be activated together and if you get this lucky the re-spin and the Draupnir re-spins are played before the free spins feature starts.

Play ‘n’ Go have a knack at making their slots look easy and yet again they have triumphed. There is plenty of atmosphere and features to make their slots great prospects. In Odin’s Ring they have created an imagery with some niche symbols, and it works incredibly well. I don’t think that this is slot of the year material however it is beautiful to look at and an engaging and solid game.
I feel that Play ‘n’ Go just have what it takes to produce solid slots and there is no doubt that their offerings are all decent quality. Odin’s Ring falls into this category and I really have nothing bad to say, the statistics are respectable, and the game is easy on the eye. If I had to say something negative it would be that this feels like just another average Play ‘n’ Go slot.