It's beginning to look a lot like Slotsmas. This slot, we are sure, will be just the first of the many Christmas- themed slots that are certain to fall in a great deluge from designers as providers start to capitalise on festive cheer and optimism. Playson is just the first designer to do so this year for us. The slot is almost an exact copy of Buffalo Power: Hold and Win, just with a few yule-tide changes, all of which are aesthetic rather than functional. Therefore, if you have played the original, there isn't much you need to do to adapt to playing this new version.

As with the original game, the central feature in this game is the Hold and Win feature, triggered by landing six or more sun symbols on the reels simultaneously. When this bonus is triggered, new bonus symbols will come with multipliers in the range of 1x and 10x the stake. You are then given three re-spins to try and bag more bonus symbols. Any new bonus symbols that land become sticky and contribute to winning one of the four available jackpots. This game also has a free spins round triggered by landing three mountain lion scatters on the reels simultaneously. All features will be explained in greater detail later on in the game. 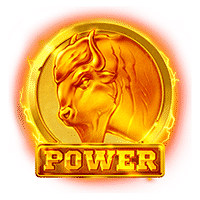 The theme for this game is a combination of wild west and Christmas. The main thematic structure is still there in terms of the North American animals, wide-open prairie setting and main character of the buffalo. However, all these aspects now have a festive twist. For example, the buffalo now wears a Santa hat and sports a long white beard. Other changes include the background being covered in snow and wintery conditions. Finally, the board itself has even been decorated with ball bells, candy canes and mistletoe. The effect is like Christmas in the wild west.

If you remember in the original, the background is a vista looking out over a wide and expansive arid environment, with scattered sandstone obelisks typical of the states in which the wild west is made up of. However, now that Christmas has descended, snow has fallen in great quantity, causing drifts to build upon the ground. A darker tinge to the background also gives the feeling of approaching winter, with the nights drawing in, making the background feel less expansive than it once did.

The board, as we mentioned, now sports a range of Christmas decorations from purple ball bells, red ribbon and even a couple of sprigs of mistletoe.

The symbols for this game haven't changed from the original and are still split into low-value, high value and special symbols. The low-value symbols are the J, Q, K and A in playing card royals. On the other hand, the higher paying symbols are the animal symbols – the owl, eagle, big cat and bear. The most valuable of these is the bear symbol worth 20x the stake for the top combination. The Buffalo symbol is the wild as well as being the most valuable symbol in the game, paying out at 50x the stake for the top combination. The sun is the other special symbol used as the power symbol for the Hold and Win bonus. Finally, there is the game's logo which represents the free spins scatter.

Buffalo Power Christmas is played on a 5-reel, 3-row machine with 20 fixed pay lines. To win combinations, players must land three or more matching symbols on pay lines moving from left to right, starting from the leftmost reel.
The betting range for Buffalo Power Christmas is 20p to £100 per spin. To adjust their bet levels, players can toggle their stake up and down using the tool located at the bottom left-hand side of the screen.

Further information, including a short tutorial and a display of the paytable, can be found via the menu button in the right-hand corner of the screen. The spin and auto spin buttons are located in the centre of the screen.
Volatility for this slot is rated in the medium range. The return to player percentage for Buffalo Power Christmas is 95.85%, which is below average. The biggest payout that players can win on one spin is 4,806x your stake.

The simplest bonus in this game is the wild bonus. This concerns the buffalo symbol – the wild. This icon can substitute for any other regular symbol to help score more wins.

However, the main feature in this game is the Hold and Win feature triggered by landing six or more sun symbols on the reels simultaneously. During these spins, bonus symbols can come with a multiplier between 1x and 10x the stake.

The game begins with three re-spins, the idea of which is to land more bonus symbols. Every time that a new symbols lands, the re-spins are reset to three. Collecting symbols on the board puts you in line for one of four available jackpots by collecting the appropriate number of the relevant icons.

The mountain lion logo symbol, as you'll remember, is the free spins scatter. It appears on reels 2, 3 and 5. Landing three or more of these symbols triggers the free spins game, giving you eight free spins. During these spins, you can come across stacked wilds with 2x multipliers.

If you liked the previous game (Buffalo Power: Hold and Win), you're virtually getting the same game here, just with a bit of festive cheer. Thankfully the original game was actually pretty good. Jackpots and free spins make this a feature-packed game, too, with a decent win potential if a low RTP. Playson is probably just trying to reignite some interest in an older slot with a new skin.

Is there a free spins round for Buffalo Power Christmas?

What is the betting range for Buffalo Power Christmas?

What is the return to player percentage for Buffalo Power Christmas?

What is the volatility for Buffalo Power Christmas?

The volatility for this game is in the average range.

for playing with Buffalo Power Christmas: