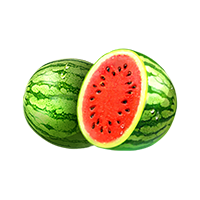 Are you getting to the point of saturation with games that have more features than grains of sand in the desert? Are you tired of being blasted with an overload of information, thematic wizardry and complex visual concepts? Do you wish that slots behaved more like they used to? If so, you are in luck, as Playson has developed a game that will immediately appeal to you. The game is called Burning Wins x2. Unlike the new school of slots currently on the market, this game keeps things refreshingly simple with a standard 3x3 board and some easily recognisable icons.

The feature (and it is only the one) in this game is as straightforward as they come. It is triggered any time that a group of nine identical fruit symbols land on the reels simultaneously. When this happens, players are awarded a 2x multiplier to boost their win by double. The only other real feature of this game is the Turbo option. This is an optional playing mechanic that speeds up the pace of the reels, allowing players to move through the game at a quicker rate, getting to the good spins faster.

The theme for this slot game is the classic fruity look that you'll find in many older slots, dating back as far as some of the original mechanical machines. Doubtless, you will have probably heard why slot machines have fruits as their symbols in so many games but what is less known is why the BAR symbols appear. This is because, in addition to the gum flavours that the fruits used to represent, the BAR symbol represents the gum packet that used to be dispensed. The BAR is actually the logo of the old company that purveyed these gum packets.

The background for this slot machine, being true to the simplistic styling, is just a featureless purple background. There are no elaborate graphics, distracting animations or indeed any zany characters to contend with here. For a lot of gamers, this will feel like a breath of fresh air, as for years now, slots have been becoming ever more complex and visually convoluted. Purple is an excellent colour choice as it has connotations of luxury, prestige and wealth. It is also a calming hue that has an inviting yet understated tone.

The playing board is a golden rectangle that contrasts nicely against the deep purple background. The board's interior is an even darker purple, which works well with the vibrant, almost garishly coloured symbols that sit upon it.

The symbols for this slot are split into low-paying, high-paying and special symbols. The low-paying icons for this game are the various fruits that you will see on the reels. These include cherries, oranges, lemons and plums. Each payout at 7x the bet for the maximum combination. However, the purple X symbols that pay just 1x the bet for the top combination are even lower than these. The BAR icons are up from these two groups of icons, which pay a maximum of 10x the bet. Up again from these are the liberty bells, paying 50x the stake for the top combination. Finally, the most valuable symbol on the board is the 7, three of which on a pay line will reward you with 150x the stake. The only special symbols in this game are the multiplier symbols which appear when you land nine identical fruit symbols on the reels. 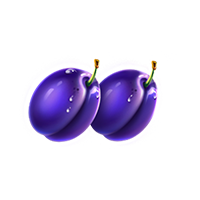 Burning Wins x2 is played on a 3-reel, 3-row machine with 5 fixed pay lines. To win combinations, players must land three matching symbols on pay lines moving from left to right, starting from the leftmost reel.
The betting range for Burning Wins x2 is 10p to £100 per spin.
To adjust their bet levels, players can toggle their stake up and down using the tool located at the bottom left-hand side of the screen.

Further information, including a short tutorial and a display of the paytable, can be found via the menu button in the right-hand corner of the screen. The spin and auto spin buttons are located in the centre of the screen.
Volatility for this slot is rated in the medium range. The return to player percentage for Burning Wins x2 is 95.98%, which is just below average. The biggest payout that players can win on one spin is 300x your stake.

There are just two features available in this game. The first of which is the x2 multiplier feature that the game is named after. This feature triggers any time that you manage to land nine identical fruit symbols on the board. When this happens, a x2 multiplier will come in to boost the size of your wins.
The other feature here is more of an optional extra. It is the Turbo option, which, when activated, speeds up the gameplay so that you don't need to wade through all of the dud spins to get to the profitable ones. It not only speeds up the reels but makes the symbols stop faster too.
Like the rest of the game, the features are short sharp and simple.

If you are looking for purist gaming, like you might have found in days gone past where features were simple and designs were classic, look no further than this new game from the Playson Studio. This being said, if you are looking for exciting top payouts, this game might not be the one for you. A maximum of 300x the stake isn't going to get many people pumped. However, if you're looking for something easy to play on a Sunday afternoon, this is probably a good fit.

Is there a free spins round for Burning Wins x2?

No, we are afraid not.

What is the betting range for Burning Wins x2?

What is the return to player percentage for Burning Wins x2?

What is the volatility for Burning Wins x2?

for playing with Burning Wins x2: