for playing with Royal Coins Hold and Win:
TAGS most-popularresponsive 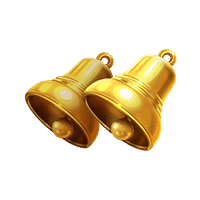 Playson have gone through a purple patch of success recently using the Hold and Win bonus format and don't seem to want to let it go just yet. Thus, they have created yet another slot with this iconic mechanic at its core. This time the game is themed on so-called Royal Coins, which are gold and have a beautiful crown impressed upon them. Apart from this small thematic change, the display is more or less standard in its appearance as a classic fruity slot with reels full of tantalising fruits.
If you have played a Hold and Win slot before, there won't be much that surprises you here. That being said, there are some subtle differences.

The features included in Royal Coin Hold and Win comprise exclusively of the Hold and Win feature and a wild bonus. The Hold and Win Bonus is triggered by landing 3 or more bonus or royal bonus symbols on the board at the same time anywhere on the board. The bonus gives you three re-spins on a new type of reel set. When you have activated this feature, the goal is to keep landing additional bonus symbols, thereby resetting the re-spin counter and giving you the chance to win fixed jackpots of various sizes.

The theme for Royal Coins Hold and Win isn't all that defined, but from what you can see on the screen, there is a nobility/wealth theme that permeates most of the content. The most you could say is that the theme has been concocted to imbue the play with a sense of style, status and links to the establishment. If you were less kind, you might say that they changed the power symbols to gold coins and changed the background, something that might have taken the work of half a day. From the provider's perspective, though, it's understandable why they might want to keep reproducing the same game but in different skins for maximum coverage.

The background for this slot is a purple wallpaper with a repeated pattern of the Fleur-de-lis. This symbol has been used throughout time across many different cultures, countries and movements. Most notably, it has been used in the French and English monarchies and usually denotes an attachment to royalty hence Royal Coins. The symbol is actually a combination of three lilies – fleur, meaning flower and lis, meaning Lilly.

The board is a pretty standard looking playing board with three reels, each with a very dark purple background, making the loud and colourful fruits pop ostentatiously from the screen.

The symbols for this game are a standard set of fruity symbols like you might see on traditional games in brick-and-mortar casinos. These include in ascending order of value - cherries, oranges, lemons, plums, watermelons, grapes, bars, and bells. Bells are the most valuable symbol in this game, barring the wild. The wild symbol is the lucky 7 icon, which substitutes for any other regular symbol to help you score more wins. The lucky 7 for the top combination pays out as much as 50x the stake. The only other symbols in this game are the bonus and royal bonus symbols represented by gold coins and coins with crowns on respectively.

Royal Coins Hold and Win is played on a 3-reel, 3-row playing board with five active pay lines. Players must match three symbols in combinations running along pay lines from left to right to create winners in this game.
The betting range for Royal Coins Hold and Win is 20p to as much as £100 per spin. To change your betting level per spin, use the bet adjuster tool located at the bottom of the playing window.

Further information regarding the slot, including a display of the paytable, can be accessed by clicking on the settings menu. The spin button is located to the bottom right of the reels. You can set up auto spins in the game's menu.
The volatility for Royal Coins Hold and Win is rated in the high volatility range. The return to player percentage for Royal Coins Hold and Win is 95.64%, which is just under average. The biggest payout that players can win on one spin is 4,259x your stake.

Normal bonus symbols all display a random multiplier value in the range of 1x to 15 your stake. These icons can only appear on reels 1 and 3. Royal Bonus symbols, in turn, don't carry any intrinsic value and only appear on reel 2. However, these symbols do stick to the reels for the duration of the bonus game and gather all the other coin values on the reels on each spin. It is, in practice, the collect symbol.

Whenever a new bonus symbol lands on the grid during the feature, the re-spin counter is reset, and the round continues. The feature will end when you run out of re-spins or when you fill the screen with bonus symbols. Jackpots can be won when the appropriate jackpot symbols fall onto the reels and are collected in three of a kind. The jackpots are sized as the following: Mini, Major, and Grand Jackpot. The Grand Jackpot is the largest, paying 1,000x your stake.

Yet another Hold and Win spin title hits the market. Like we have said before, some players like these games; others find them frustrating. It is more than likely you will have made your mind up on these, as there have been plenty of them. As ever, RTP and volatility are not favourable, but jackpots make things tempting to those that can stick it out long enough.

How many reels does Royal Coins Hold and Win have to play on?

This game has three regular reels.

The top payout for this game is 4,259x your stake.

Yes, Royal Coins Hold and Win is optimised for all mobile devices.

What is the max RTP for Royal Coins Hold and Win?

What is the betting range for Royal Coins Hold and Win?

for playing with Royal Coins Hold and Win: