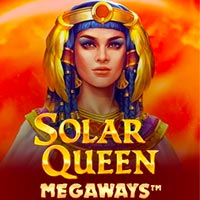 The original Solar Queen, according to a range of sources, was actually one of Playson’s most popular titles, with a theme and gameplay that agreed with many punters. On the back of this success, Playson is trying to upgrade the slot to try and entice even more players to engage in this game with this new edition.

As is probably obvious, the main change is that they have added the Megaways mechanic, meaning the number of symbols per reel fluctuates with every spin. Visually, Playson has made things a little more intense with the addition of fiery graphic wilds, and an all-around ‘hotter’ feel to the game.

Features for Solar Queen Megaways comprise a small but valuable selection of bonuses. These start with the Fire Frames bonus, which highlights certain frames when sun symbols land on them and remain for 10 spins. All Fire Frames are transformed into wilds at the end of each cycle to help score more wins. A winnings multiplier comes into play when a sun symbol lands on a Fire Frame creating a x1 multiplier. However, this multiplier grows by 1x every time that a sun symbol lands on it. There is also a free spins and bonus buy feature. All bonuses will be explained in more detail later in the review. 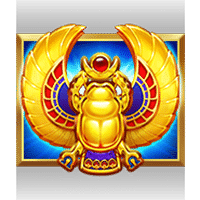 As with the predecessor, the new Megaways version of this slot also has an ancient Egyptian theme with a specific focus on hieroglyphs and the sun. You have probably seen a lot of ancient Egyptian themes in your time. This one is perhaps more towards the classic end of the spectrum, with no wild gimmicks like animated mummies or mad characters disrupting the board in any way. Solar Queen Megaways feels like it was built in the fairly typical Playson style of no-nonsense clarity. For many players, this will be a relief, as some slots these days are over the top with their graphics and extraneous visual features.

The background for this slot is clearly a view from the steps of an Egyptian temple. However, the view out towards the pyramids is obscured by a red haze. One can only assume that this thick granular shield is a sandstorm made red by some sort of lunar irregularity. Either that or this specific ancient Egyptian temple is inexplicably on the planet Mars. However, we suspect that the designers have employed this effect so that they needn’t bother with too much detail out towards the palm trees and pyramids, saving them plenty of work.

The playing window for this slot is a standard Megaways board with five reels and an Egyptian style pedant topping the construction.

The symbols for this game are split into low-paying, high-paying and special symbols. The lowest paying symbols on the board are the 10, J, Q, K and A in playing card royals. These are then followed up by four animals – the cat, lion, stalk and hawk. On the other hand, the premium symbols are the various Egyptian gods that you will see on the reels. These comprise Anubis, Horus and the Solar Queen. These are worth in the range of 1.5x to 2x your stake for the top combination. Finally, the specials are the wild, the sun, and the scarab beetle, which is this game’s free spin scatter.

Solar Queen Megaways is played on a 5-reel Megaways mechanic board. This means that between 2 and 6 symbols may land on each reel per spin. To win combinations, players must land three or more matching symbols on pay lines moving from left to right, starting from the leftmost reel.

The betting range for Solar Queen Megaways is 20p to £100 per spin. To adjust their bet levels, players can toggle their stake up and down using the tool located at the bottom left-hand side of the screen.

Volatility for this slot is rated in the very high range. The return to player percentage for Solar Queen Megaways is 95.85%, which is above average. The biggest payout that players can win on one spin is 3,874x your stake.

The first feature players should be aware of in this game is the Flaming Frames bonus. When a sun symbol falls onto a position on the reels, that position becomes wreathed in flame. Flaming Frames last for ten spins, at the end of which all Flaming Frames in view suddenly change into wilds. This gives you more chance of scoring wins.

The second feature is the Win Multiplier bonus. When in the base game, Sun Symbols also can create multiplier frames by landing on a position that is already a flaming frame. When they do, they increase that frame’s multiplier value by 1x. The multiplier grows by 1x every time a new sun symbol lands on the position. These help to boost the wins of base game spins. However, after the tenth spin, all flaming frame multipliers reduce their multiplier to x1.

Your progress will be saved and brought into the free spins game if you trigger the free spins whilst collecting multipliers.
The free spins are triggered by landing three scarab symbols on the reels at the same time. This will award players with ten free spins. Within this bonus game, when sun symbols land, they transform into sticky wilds. If a sun symbol finds its way to a sticky symbol frame, then the multiplier mechanic will start again at 1x.

Whilst within the free spins, the size of the reel is guaranteed to be at least the minimum size of the number of sticky wilds on it, meaning players don’t miss hitting them.

Finally, the bonus buys feature allows you to buy your way into the free spins round for 100x the stake.

Even if you enjoyed the reboot of this slot, and let’s be fair, there are plenty of reasons why you might. This game does feel like a tired rehash with few original aspects. Playson probably thought that adding the Megaways mechanic would be enough of a change that players would be excited enough to play it. This is also an incredibly volatile game, so bigger wins are very much few and far between.

Is there a free spins round for Solar Queen Megaways?

What is the betting range for Solar Queen Megaways?

What is the return to player percentage for Solar Queen Megaways?

What is the volatility for Solar Queen Megaways?

for playing with Solar Queen Megaways: