HomeGamesSlotPlaytechAge of the gods norse gods and giants

Age of The Gods Norse: Gods and Giants

Introducing Age of The Gods Norse: Gods and Giants Slot

Playtech is proud to announce that their protégé studio Origins has added another new title to their Age of God slot series. This is the latest additional to their slot series referred to as “Norse” with this being Age of The Gods Norse: Gods and Giants Slot. This slot begs to ask whether there is no end to their brilliance when it comes to creating a new story complete with fitting features and symbols.

When it comes to the design Playtech seem to always get things right. Their symbols are superb and expertly executed, their monsters and series not only reflect the title of the game, but they get it spot on with the overall visuals, ambience and manage to produce the whole package. This slot invites you to join the Nordic Gods Thor and Odin as they battle against one and other whilst the giant frosty giants and serpents sit on the other side of the divide.

Everything in this slot flows seemingly with dynamics that bring to the fore several video effects. When you land a large win, it is announced in a truly magnificent way and there is no lack of energy that surrounds the pay line wins that are on offer. If I had to be pedantic this slot could be enhanced with a better background, but it is rare for any player to worry about such a small detail in the grand scheme of things. 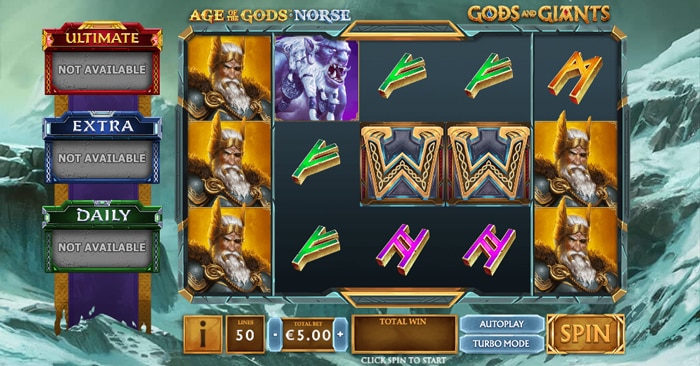 Playtech is well known when it comes to the game controls to take the attitude that less is more and therefore the layout is simple. The buttons that you need to use in this slot are all located at the bottom of your game screen and they are so large that they cannot be misses. There are some players that find it difficult to play titles on their mobile phones however you will be pleased to know that this slot is completely mobile friendly although this is not true for other titles in this series for example, Age of the Gods Norse: Gods and Giants slot.

In the bottom right hand corner of your game screen you will find the spin button and to the left are the buttons that activate the turbo mode and auto play. The turbo mode is used to make the spins spin even faster and stop sooner which makes the game play more dynamic. The spin button can be found at the bottom right corner of the screen. To the left of that button are those for Turbo Mode and Autoplay. The first button causes the reels to spin faster and stop sooner, resulting in a gameplay that is a lot more dynamic than the usual. The auto play mode allows you to sit back and relax whilst your reels do all the work and ideal if you want to play more than 12 spins in a row. Once you have activated the auto play button there are several pre-sets that you have to choose from, and this includes setting the reels to spin up to 1,000 times.

The total win window provides you with the win amounts that are on offer and to the left of this is the total bet window where you can choose to play for low, medium or high stakes on your slot adventure. There is an information button in the left-hand corner, and this opens your pay table to display all the symbol pay outs. Finally, there are the jackpot prizes that are displayed to the left-hand side of your reels.

You can land winnings in this slot by landing at least three of the same symbols on your reels. The best win amounts are created by landing five of the same symbols and the wins can occur on one or more of the 50 pay lines that this slot has to offer.
When it comes to the symbols this slot offers both low and high payers with the low payers depicted by rune stone symbols and the high payers are picture symbols which display monsters and gods. Some of the symbols can appear in a stack on a whole reel such as the symbol of Odin. There is also a wild that can substitute for all the symbols apart from the bonus and scatter to create winning combinations.

There are some truly epic features such as the free spin bonus that will reward you with eight free spins when you land three of the bonus/scatter symbols on your reels. The really striking feature comes in the form of the colossal reel which sits in the middle of the slot and it is here that you can benefit from several high paying symbols which can link up with the same symbols and wilds on your 1st and 5th reels.

There is also a free spin bonus feature which comes as standard with slots from this developer and whenever they released a new title in this series you could guarantee that it would be complete with a bonus in the form of proper free spins or re-spins. Landing three bonus symbols will reward you with eight spins. Whilst playing this bonus your 2nd, 3rd, and 4th reels will merge into one to create one magnificent reel which can show the wild next to the higher paying symbols and this is where you will land the big wins.

Age of the Gods Norse: Gods and Giants plays out over 5-reels with 50 pay lines and has a minimum bet value of 0.10 and a maximum of 200.00, which is a large enough range that will make this slot appeal to a wide audience. The developers have given the slot a variance that sits within the medium to high level and the maximum pay out is a welcome 5,000.

This slot can be played for free in the demo model and this is something that I urge all players to take advantage of. Not only does this provide you with the chance to get to grips with the slot and understand everything it has to offer, it means that you do not have to risk any of your own money until you have a complete understanding of how the slot will play out, which also gives you more of a chance to know how to create winning combinations.

Age of the Gods Norse: Gods and Giants has so much to offer players which include jackpot prizes, stacking symbols and a colossal middle reel. The slot is expertly created and executed and provides some epic game play. I really enjoyed this slot and will definitely return to play this slot again and again.