Pragmatic Play have been coming in hard with the upcoming releases, bashing them out into the slot industry for players to enjoy with no second to think. Their latest, Emerald King, is not really the kind of slot machine that we would pay much attention to initially, with the dated visuals and dull look, but this all changes when you see what the potential for wins is; the potential and rewards are the highest we have seen to date from Pragmatic Play and there is no way we would want to miss out on that.
As mentioned above, the only disappointing part is that the visual graphics is rather shocking, a lack lustre Irish theme we are so used to seeing in the gaming industry.

There is no real attempt to hide this boring theme, as it is simple and dull. However, if we have to put up with dull graphics in order to win the biggest prize Pragmatic Play has ever released, then it has to be worth it.
Play for the slot is situated over 5 reels and 3 rows, with a total of 20 active lines for the player to win across. Among the major features for Emerald King, there are plenty of big symbols, both 2x2 and 3x3 sized, as well as wilds, a Mini Slot features and plenty of multipliers to keep you busy! 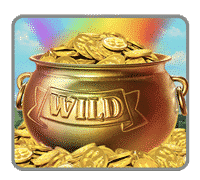 The betting range for this slot is quite expansive, starting at $0.20 and continuing up to a maximum of $100 per spin. This highest bet equates to $5 per line, while the lowest starting spin is $0.01 a line.

A win multiplier is also available and can increase at any given point, which therefore increases the potential. For the duration of the free spins features, the limit is set at 20,000 times the stake, which has the potential to give the player $2,000,000 in winnings if they should be so lucky. To reach the maximum potential it may take a couple of rounds, as we found.
As well as this there is the volatility and Return to Player (RTP). The volatility is high, with this slot being rated 5 out of 5 on Pragmatic Play’s scale; this could indicate that only the most hardened of spinners should play, however there is nothing stopping anyone giving the reels a whirl and seeing what happens. Where the RTP is concerned, it sits at 96.51% which is higher than we usually see in slots. This means that while the graphics are dull, the gameplay is not, which may be the saving grace the slot needs.

Over the years there have been a number of impressive looking slots by Pragmatic Play, and one would hope that they would keep this up throughout their slotting repertoire. However, Emerald King has gone the complete opposite way and is likely one of the worst slots they have ever produced – graphically speaking. The only way to describe it is to say that Pragmatic Play have time travelled back a decade or so, borrowed the graphics plans and thrown them onto this poor, unsuspecting slot. Back in 2010, these graphics would have passed as impressive, now not so much, and we don’t think players of today will approve.

Realistically, the symbols do not get any better, but bear with and we will explain them for you. Symbol wise the player is given Leprechaun, King, Queen, Jack, 10, grapes and cherries to spin with, decreasing in value, respectively. Granted, Pragmatic Play have done something I have never seen before – put the Royals in the middle of the pay table, not at the end. Therefore do not be disheartened when they land on the reels!

As mentioned above, besides the regular symbols, you can also land mega symbols which come in the form of 2x2 or 3x3 which means you will either get a total of 4 or 9 matching symbols when these show up – they will also help you garner big wins from the rows!

The wild, as mentioned above, is depicted as a pot of gold and is the most lucrative for the player on the reels. Since they are so valuable to the player and their prize fund, the odds of them showing up are very slim – they trigger at random, as well as being added to the reels during features.

A win multiplier is visible above the reels on the right and can go up at random, though only during a losing spin. It will stay at the same value and even increase until a win is paid, and it gets used on the reward. Once this happens, it resets to 1x again.
There is also a Mini Slots feature which will trigger at random when all the background of the reels is green. You will them be given a number of mini slot machines which you will need to form combinations of 3 winning symbols – using the 7s and symbols – in order to win!

Emerald King is a promising slot if you care about the potential rewards and features over the graphics and visuals. If you can ignore the graphics then this slot could be an impressive fun-filled slot for you. The promise of $2,000,000 might also help swing your decision!
High volatility, above average RTP, features and multipliers, this slot has it all. But the graphics are a downer on the slot and bring it from potentially being on of their greatest gameplay slots, to being one of their worst developed slots in their repertoire.

for playing with Emerald King: