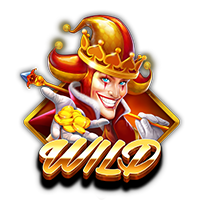 Joker King from the developers at Pragmatic Play is a harlequin themed slot that is edgy, vibrant, and vivacious. With slots like this it can be that if you have played one you have played them all and this is something that does apply even more if you have no interest in the subject matter. For example, take football, if you are not a football fan then can you think of anything worse than standing on the side lines in the freezing cold watching boys/men kicking a ball around! On the other hand, there are some who adore the intensity and drama that is caused by two modern gladiators going head-to-head in battle. This point applies to joker slots as there are some that are merely just a take on others whereas some are totally different. Joker King does not sway either way, and with this in mind if you are ready to jump into a world that is complete with disco, fruit, and jokers.

On the right of your game screen, you can see the joker character bobbing along with a hand full of gold coins whilst also spraying the reels at certain times with wilds. This is set against a fabulous purple backdrop with another tub of gold coins sitting on top of the gold framed reels, and whilst the visuals are simple, they are vibrant.

The soundtrack is less conventional and most of the time it is a funky backing track that you would expect from this type of themed slot, but when the action gets going so does the music. The best way to describe this would be a lot of circus styled jingles and the occasional but of ska music to boot. I cannot help but think that the developers have used this style of music as an outlet for their creativity.

When it comes to the game symbols, there are six regulars, and these pay from left to right starting with the leftmost reel when you land a win although the matching symbols do need to land on adjacent reels. You can expect to come across plums, cherries, oranges, 7s, stars and BARs. Win combinations can be created up to six symbols long and when they are this long you can expect pay outs of 1x to 5x your stake and then there is the wild which we will cover later in this review.

Joker King is the fifth harlequin style slot from Pragmatic Play and therefore this studio has plenty of knowledge on how to craft this style to perfection. This really shows as this slot is an excellent example. The slot plays out on a 6-reel, 4-row grid that offers 25 pay lines for you to land your winning combinations on.

I was relatively surprised when it came to the volatility, as the developers describe the slot as high whereas the actual game play felt relatively gentle. Although there are no statistics on the free spin frequency or hit rate but suffice to say they both activate quite often. It is the free spins that surprised me the most however this could have just been beginners’ luck or good fortune. Unsurprisingly, the default return to player is positive and as you would expect from this developer and it stands at a solid 96.5%. The slot can be played on all devices with a good bet range that starts from just 25p per spin and goes up to £125 per spin. 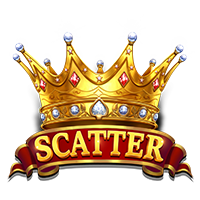 There are two other symbols you will come across in Joker King these being a wild and a scatter. The wild can show up on any reels and will reward you with 5x your bet for landing a line of six. When a wild symbol lands at the end of a spin, one symbol is chosen at random and the joker then changes all of these into wilds and the wins are paid out once the transformation has taken place.

The scatter can also appear on all your reels and when it does it forms a crown, and when a scatter does land it comes with a random multiplier that starts from 2x, 3x, 5, 10x, or 25x, and this will be applied to any win on the current spin. If you land more than one scatter the multipliers are added together. You will see on the pay table that there is a mention of paying 1x your bet when you land three or more scatters, however the slot does pay out the sum of the visible scatter multipliers by your current bet. When you land three or more scatters you will activate the bonus game and if you land 3, 4, 5, or 6, scatters in view you will be rewarded with 8, 10, 15, or 20, free spins, respectively. The wild symbols can then land on every free spin activating the wild symbol replacement described above. Free spins can then be reactivated the same way in the bonus feature and there are no limits.

The gaming developers at Pragmatic Play have done more than enough to keep players entertained with Joker King. The slot is fast paced particularly with regards to the bonus game where you land a minimum of one wild on every spin which can see you landing an array of symbol transformations; however, you may find that you only walk away with 20x your stake thanks to the lower values, and the slot is also capped at 5,000x your stake.

For some the layout of the grid and number of pay lines may out some players off, particularly the number of pay lines as this does feel dated but it goes with the whole theme. However, the alternatives for the developer would include few symbol transformations and lower values which are things that I do not think would attract players, and it is all about the target audience at the end of the day.

Personally, I found Joker King a pleasure to play and very entertaining and I believe that fans of this style of slot will be entertained too.

What is the biggest win available?

Can you purchase free spins, and if so, how much does this cost?

Free spins are not available to purchase.

What is the return to player?

What is the bet range on offer?

for playing with Joker King: