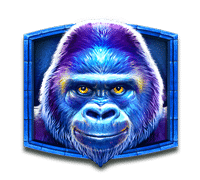 Pragmatic Play have developed a brand-new slot called Jungle Gorilla, which has just launched into the world of slot machines. Taking the player on a wildlife watching experience in the deep jungle, the player meets the main character – a cheery gorilla. This nature-themed slot allows for the player to enjoy the flying scatters and fun gameplay.

Looking at the visuals, there is little doubt that the developers of Pragmatic Play took inspiration from the smash hit Jungle Spirit, by NetEnt. The name even harkens back to this. It may be a coincidence, but either way, the likeness is there. The slot puts its faith in one main feature to keep the players occupied while they spin the reels, but saying this, the slot is far from rudimental.
If you remember the Harambe campaign, you’ll be pleased to see a lookalike leading the action of Jungle Gorilla, with a cheerful grin as he does. Spinning the reels activate scatters and plenty more as the player dives into this fun-filled jungle slot.

The betting range for this slot is from 20 to £100 per spin, across a reel set that spans 5 reels and 3 rows. There are 20 pay lines for the player to spin across and this allows for plenty of chances for the player to win. Whether you have deep pockets filled with money to burn, or you’re hoping for a lucky win with a smaller budget, this slot has something for everyone.

As usual with Pragmatic Play, the volatility is clearly displayed for the player to see it. In the case of this slot, Jungle Gorilla, the rating is 3/5, which lands this slot in the medium section of the slot volatility spectrum. The RTP is impressive compared to some we are used to seeing, setting itself at 96.57%. This allows for all players the chance to do well with this fun slot.

The design and symbols for Jungle Gorilla

The design of the slot is attractive, with the reels set deep in the luscious rainforest, with ruins, butterflies and fallen leaves around them. The soundtrack in the background gives a relaxing, soothing vibe, with an African-like synth track and natural jungle sounds. Closing your eyes you could almost meditate to the music. It wouldn’t seem out of place in a witchy, crystal shop either.

Following on from the design, we can look at the pay table. There is a total of 10 regular symbols, and two specials.
The regular symbols include four royals – J, Q, K and A – depicted as stone statues draped in ivy, as well as chameleons, parrots, elephants, tigers and of course gorillas. The slot relies quite heavily on the multipliers and so the wins from the regular symbols are quite modest. Five on a line can range from x2 for the chameleons, up to 4.5x for the gorillas when looking at the premium symbols.

The golden gorilla acts as a scatter in this slot, which is one of the special symbols in this slot. The other is the wild, which allows for substitution with any other symbol except for the scatter. It also gets a boost from the game’s features, so watch out for that.

Features to win with

Above each of the reels is a multiplier that progressively builds, beginning at x1. Whenever the golden gorilla scatter lands on the reels, it flicks the multiplier upwards by 1. The multipliers do not seem to rise continuously forever; each is capped at a x5 multiplier – this is the case even if plenty of gorillas have landed on the reels before.

Whenever a wild lands on the reels and is part of a win, that respective reel multiplier is assigned to the symbol. If there is multiplier wild multiplier wins on a line then their values are multiplied together, rather than added, which offers even higher multipliers for the player to win with. After a win is awarded to the player, the reel multiplier will reset back to x1. Moving to a new bet level will also restart the multipliers at x1, but progress made will be saved with that bet level. If you get a reel to x3 at 20p and then switch to £100 per spin, the multipliers will reset to x1. However, move back to 20p per spin and the progress of x3 will be saved.

Jungle Gorilla is well designed, but only having only one main feature is a downside for us. Even one more feature would shoot this from average to exciting. Pragmatic Play are quotes as having up to 2,800 times the stake being awarded to player. While it is nothing compared to what some slots have on offer for the player, it does offer some good rewards for those willing to dare and bet higher than usual. The RTP and volatility lend to this and allow players more room to play.

The best way to play this slot is slowly. That way you have the chance of building up the multipliers for bigger wins. On the other hand if you prefer to get things going, or you are looking for a more sophisticated slot, then we recommend you avoid Jungle Gorilla. Fun-filled and cheesy, it is a good slot to ease you in.

This slot was developed by Pragmatic Play , one of the leading companies in the gaming sector.

What is the maximum payout of Jungle Gorilla?

The maximum win over the course of a single spin is 2800 times the initial bet.

Can I play Jungle Gorilla on Mobile?

Of course, Jungle Gorilla uses HTML5 technology that allows you to play with any updated browser; therefore it is possible to play on smartphone and devices using Windows, iOS or Android.

What is Jungle Gorilla RTP?

What is the betting range for Jungle Gorilla slot?

The betting range for this slot is from 0.20 to 100 demo credits per spin.