Overview of the Dog House Megaways

The Dog House Megaways is the latest slot to be released from the developers at Pragmatic Play and really brings home the fact that people can usually be split into those who are either cat or dog people. For those who fit into the dog category then this is the slot for you!
The original version of this slot was released in May 2019 and was a huge hit that was incredibly well received within the casino players and community alike. What is there not to love about cartoon hounds? The best news is that they are back with this sequel of the favourite slot which bites harder and barks louder! In the same way as many of the Megaways slots that have been remade some parts are the same whilst others are nowhere to be seen. So, if you are ready to find about whether you really are a dog person and whether they are your best friend read on.

If you have been awaiting the sequel yet dreading it in case, there is a lot of change the visuals in this slot should provide you with a lot of comfort. The team of four-legged beauties are hanging out in a suburban yard surrounding by a white picket fence and they are still as cute and innocent as ever. 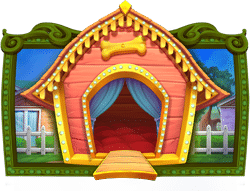 The biggest and most noticeable difference in this slot is the game area which is a lot larger to make room for the 6-reel Megaways game engine. As usual on each of your spins there will be 2 to 7 symbols per reel which gives you a colossal number of ways to win which start from 64 and go all the way up to 117,649. Above your reels you will see the active number of ways you can win for each spin which is good as it means you know exactly what your chances are of landing a win.

It will soon become apparent that the slot offers no bonus reel or any type of reaction or cascade feature, these do not appear in the bonus game. Therefore, you land a win and then you go onto your next spin. This is a rather contentious decision that the developers have made and one that may not be taken likely by some players.
When it comes to placing you bet you can choose to play with a minimum of 20p per spin up to a maximum of £100 per spin which is a good range that will appeal with many players. The math model is set on par with the original slot and there is a default return to player of 96.55%, however, the slot is rated as 5/5 highly volatile by the developers which is the highest rating. Whilst I did activate the free spins reasonably quickly, I would say you need to be patient and some of the time was tough. However, there is potential, in fact it is almost double when compared to what the first version of this slot offered. Playable from 20 p/c to £/€100, the math model throws out similar stats to the original, starting with an agreeable default RTP rating of 96.55%. Running alongside this is high volatility rated 5/5 by Pragmatic which is as high as it gets. Despite triggering free spins quite early on during testing, sessions can be tough. However, potential is there, almost double what was possible from the first Dog House game.

When it comes to the symbols if you are au fait with the original slot then these will be familiar to you, you can expect to comes across the usual playing card symbols that consist of chunky tiles from 10 through to Ace these are then followed by collars, bones, pugs, dachshunds, Rottweilers and Shih Tzus. Although the values in this slot are lower than in the original the ways you can win are amplified and landing a line of premium dog symbols are worth from 1.5x to 7.5x your stake.
The wild is represented by the dog house symbol, and this can appear on your 2nd, 3rd, 4th, or 5th reels and can substitute for all symbols except for the scatter to create winning combinations. When a wild is landed it could have a random x2 or x3 multiplier added to it, and if you have more than one wild in your winning combination any multipliers you have will be added together to provide you with your final prize. 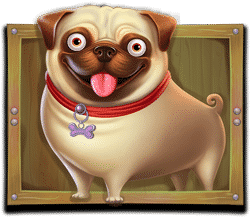 The features that are on offer in this slot are like those in the original slot with just a couple of tweaks. The scatter which is represented by the dog paw and this can appear in any position on your game screen, if you land three or more you will activate the bonus game where you get to choose either the Raining Wilds Free Spins or the Sticky Wilds Free Spins, but be aware that neither of these features can be retriggered.
If you are lucky enough and land 3, 4, 5, or 6 scatters you will be rewarded with 7, 12, 15, or 20 free spins if you decide to play the Sticky Wilds Free Spins option. In this feature you can land from 2 – 7 sticky wilds on each reel that carries a multiplier of 1x to 3x. The wilds stay on your reels until the round in over, changing in size with the reels which is all dependent on the number of Megaways you have generated.

The new addition to this version of the Dog House Megaways is the Raining Wilds free spins feature and you can activate this by landing 3, 4, 5, or 6 scatters and for this you will be rewarded with 15, 18, 25, or 30 free spins respectively. In this feature there is up to six wilds symbols which carry a multiplier of 1x to 3x and these can be added to the screen in random positions.
However, if you do not want to wait to land 3+ scatters there is the option to buy bonus. The cost of this feature is 100x your stake and then you are guaranteed that a random number of scatters between three to six will be rewarded on the next spin.

As previously mentioned, The Dog House was a huge deal for the development team at Pragmatic Play so it is understandable that there have been many players anticipating the release of this version. Whether the slot will live up to your expectations will depend on what you are expecting, but it certainly lived up to mine, and if like me you were waiting for more or less the same but on a Megaways grid you will be over the moon with this offering.