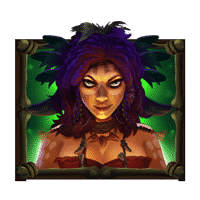 Voodoo Magic is the latest slot from the gaming development team at Pragmatic Play, and as a developer they know a lot about the spookier things that life can throw at you, being responsible for slot that are based on zombies, ghosts, and skeletons. When this developer takes on a dark subject matter, they do it well. In this slot they have decided to choose an exotic way to scare the players with the mysterious dark art of Voodoo, which results in this slot, Voodoo Magic. This is a good-looking slot with plenty of features, so, if you are willing to take a walk of the dark side read on.

Whilst Voodoo may have originally come from Africa, it did thrive in the Caribbean, however it is the New Orleans Voodoo that we see on television, in themed games and books. This style of Voodoo came from mixing Catholicism with traditional Voodoo and ended up in Louisiana when the Haitians left after the 1791 slavery revolt. With this you get a swampy, paganistic, a little but sexy and rather scary version which is what Pragmatic Play have recreated in this slot.

The slot plays out over 5-reels and 40 pay lines, with the grid being set within the voodoo priestess Mambo’s hut. Mambo is standing to one side stirring up magic in her green misted cauldron. Around the place you will see eyeballs, snakes in jars and dolls. There is a sultry soundtrack which plays in the background and goes from sounds of the night into a full-on Mardi Gras celebration when the bonus games come around. The music is good as are the visuals.

When it comes to the symbols there are ten regular ones which include the usual playing card symbols 9 through to Ace and four picture symbols that are made up of alligators, a lady in a trance, grinning skulls, and goat skulls.

You can play Voodoo Magic on any device which gives you the freedom to play wherever and whenever you wish, with the first decision you need to make being the amount you want to bet. The bet range starts at just 20p per spin up to a maximum of £100 per spin and this is a good bet range that will appeal to a variety of players. When it comes to the math this is a slot that is aimed at players that appreciate highly volatile games with the developers marking this as 4.5/5 and they make full use of the return to player which is flexible so the numbers can vary dependent on where you choose to play. However, with a default of 96.5% there is no reason to be put off.

Wins are created by landing three to five of the same symbols on one of your pay lines. As stated above three is a total of ten regular paying symbols, the picture symbols will reward you with 3.75x to 10x your stake when you land five in a combination. The wild is worth a little bit more and pays out 12.5x for landing five as well as being able to substitute for all the symbols except for the bonus to create winning combinations.

There is a good variety of features on offer even though the bonus games are similar there is plenty to keep players entertained. Not only can you sample a free spin feature, but you can also take advantage of the two random spin features and a bonus buy.
The random features are activated when you land two scatters on your 2nd and 3rd reels which means that you will fail to activate the bonus, when this happens you will see two potion bottles hovering over your screen and you then click one to receive the modifier. One of the bottles is the mystery curses and this will see a random number of wilds get added to your reels and the win is evaluated. The other is the Fortune Hex which sees all the lower value symbols and scatters so that there are only the high paying symbols present.

The next feature is the free spins, and this can be activated by using the buy in feature which will cost you 80x the stake or by landing three of the bonus symbols on your middle three reels. It is at this point that the mystery symbols may be added to your reels and these turn into any matching pay symbols. Better still the voodoo priestess can also use her magic to transform the symbols. Prior to the start of the round three cards are shown on the screen and will reveal one of the free games. The first free spin game is the voodoo free spins, and this comes with a minimum win which is guaranteed to be 10x your bet, then there are the super voodoo free spins, and this provides you with a minimum win which is guaranteed to be no less than 25x your bet or the mega voodoo free spins that come with a guaranteed minimum win of 50x your bet. All the bonus games will reward you with 5 free spins which you cannot reactivate unless you do not meet the 25x win guaranteed. If this is the case, you will then be awarded an additional 5 free spins and this is then repeated until you have reached the minimum win.

I really enjoyed playing this slot and it is rare to find a slot that activates a win guarantee so often and it is great to find a slot that has a fail-safe mechanic. On the downside the maximum win is surprisingly modest. Although Voodoo Magic is a highly volatile slot it will certainly entertain most players.

This is a great looking slot with a cool soundtrack with a fun vibe, there are plenty of features to keep players busy and if you are looking to while away an hour or two you should give this slot a spin or two.

How much can I bet on Voodoo Magic?

The slot allows you to place bets starting from a minimum of 0.20 credits up to a maximum of 100 credits per spin.

What is the maximum payout on Voodoo Magic?

The maximum payout is 1000 times the initial bet.

What are the special mechanics of Voodoo Magic?

Are there any other magic-themed slots besides Voodoo Magic?

You can play Wild Witches from the NetEnt provider.

Can I play Voodoo Magic for free?

Our website offers a free service. You can play our slots for free and with no time limits.