It was not so long ago when you could not turn on the television or open a magazine and not be faced with a zombie making their way towards you. Recently this trend has cooled but these creepy creatures with their decaying limbs still pop up every now and again. Pragmatic Play want to revive this undead love in this slot, Wild Walker. The title is not just a clever name it is one that describes the most regular feature in this slot, and players get additional reels in the free spins features plus expanding wilds that come into their own.

The development team at Pragmatic Play has really pout everything into the graphics of this slot in particular the animations. The full reels of zombies dance around as if they do not have a care in the world. The slot plays out over 5-reels and 25 pay line grid in the middle of a real zombie apocalypse which movie producers and writers have been warning us about for quite some time as they lurk around the corners of the street. This equates to the end of the world as we know it with the rain, lightning, buzzards, burnt out cars and so on. When it comes to the soundtrack this is interesting as it changes between laid back with not a great deal going on and then winding up to an early 90s funky metal piece which really completes this incredible weird theme.

In the base game there are five reels and these rise to eight in the bonus which has a serious effect on the value of the symbols. When it comes to the low paying symbols these are the card royals Jack through to Ace, the two middle paying symbols are represented by test tubes and needle guns. Finally, the high paying symbols are represented by four characters which are worth 4.8x to 20x your stake but manage to get the eight reels open in the free spins for pay outs that start from 80x to 400x your bet. 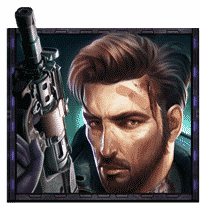 There are two fantastic features in Wild Walker these being the free spins feature and the expanding roaming wilds. The expanding wandering wilds is a 1x3 full reel sized symbol that can substitute for all the other symbols to create winning combinations except for the bonus symbol. The wild is present on every spin and switches to a random reel that covers three entire positions. The wilds will also pay out when they land adjacent, land three in a row and the reward is 1.2x your stake or get lucky and land four and you will get a great reward of 6x your stake.
The progressive free spins are the other features on offer in Wild Walker the slot. The scatter is represented by a skull in a gas mark and can show up on all your reels. As well as the wandering wild feature there are progressive free spins. The skull in gas mask image is the scatter which appears on all reels. Land 3 or 4 are in view and you will be rewarded with 8 free spins which start in the 1st or 2nd level respectively.

For every three scatters you collect in this feature you unlock the next level and are also rewarded with two free spins. When all your reels are unlocked you can keep collecting scatter and every three provides you with an additional two free spins with no limit.

Wild Walker from Pragmatic Play is an entertaining slot that is full of zombies and thanks to the multiple compelling elements this slot offers everything with regards to playability. There is no doubt that this is a fabulous looking slot that exudes quality and is finished off with excellent animation which creates an atmosphere that suits the slot perfectly. This is a lively slot, and the soundtrack emanates this and overall, the slot is executed brilliantly.

I did find once the initial impact of this slot wore off the base game was a little tedious, however, I did land the expanding roaming wild and this made up for several dead spins. At times, the wild made an appearance at just the right time and place and the reward was a decent amount and gave me the enthusiasm to continue playing. Once the free spins began the expanded wilds really began to shine, whilst this was not at the lower levels, but when the wilds locked it make the longer combinations possible and the action was quite tense, and if you get lucky you could end up with a win worth 4,900x your bet.
Wild Walker is a good, solid slot that looks superb, has a strong soundtrack, and will provide some epic moments on your reels. I would give the slot a solid 8/10, as it is a great effort from Pragmatic Play and recommend it for a spin or two.