Dinopolis brings together the glitzy world of Las Vegas gambling with the excitement and novelty of Dinosaurs. Yes, that’s right Dinosaurs. Created by Push Gaming, this is quite the wild ride of a game that looks a little like a Disney movie that didn’t quite make it to cinemas. Say what you like about the theme, at least it's new and expertly done.

In addition to the amazing characters (one of which is a Diplodocus styled to look like Frank Sinatra) and the terrific visuals, Dinopolis has plenty of fun game dynamics and bonus content to keep players entertained. These include a wild multiplier feature, an instant win coin feature and a free spins feature which comes with a range of modifiers depending on the luck of the draw. Dinopolis isn’t short of potential either, with a massive 50,000x stake grand prize. As far as Dinosaur-themed online slot games are concerned, this one certainly corners the market. 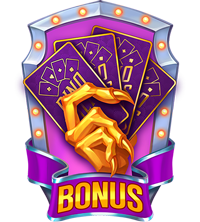 If dinosaurs had survived whatever catastrophe it was that wiped them off the face of the earth (probably a meteor) evolved to speak and dress and then invented a gambling playground like Las Vegas, Dinopolis is exactly what our reality would look like. That being said the creators probably just got some inspiration from the kids dinosaur show ‘The Land Before Time’ and adapted it to a gambling game.

The background for this online slot is the glittering Las Vegas (Las Vegasaur) strip where searchlights illuminate towering casinos studded in exposed bulbs and neon lighting. To the right of the reels, there is a dinosaur version of the statue of liberty. To the left is a huge dinosaur egg that sits above the entrance to the casino. Just underneath the game board is a fountain, like the ones you might see outside the Bellagio or Caesars Palace.

The board is in a Vegas strip style lightbulb design with gold edging. It is in a 3x4x4x4x3 format. It has been designed to emulate the show sign in lights that you see outside of some hotels and casinos. This is made clear by the two large searchlights located on either side of the board pointing directly at it.

In terms of symbols, the lower-paying symbols are a mix of dice, cards, and chips. On the next tier, there is a selection of 6 dinosaur gamblers and casino entertainers. The most valuable of this troop pays out 2, 4 or 10 x your total stake if you land 3, 4 or 5 on adjoining reels. The wild for this game is a big red ‘W’ which is in the golden jaws of a dinosaur. The coin symbols perform a seperate function as you will see in the features section of the review. The bonus scatter is a dinosaur hand holding a spread of purple playing cards.

Dinopolis is played on a 3x4x4x4x3 formation board and offers players 576 ways to win. To create winning combinations, players must land 3 or more matching symbols on a pay line on the reels from left to right.

The betting range for Dinopolis is 10p to £100 per spin. To change your stake levels all you need to do is select a new stake from the menu located underneath the playing window. The spins and auto-spins are also available from this menu, which is an outlined in black and located at the bottom of the reels. For the full menu and the settings, click on the square of squares located on the very left-hand side of the reels.

The return to payer percentage for this game is 96.4%, about average for a slot game of this type. The volatility for this slot is rated at the extremely high end of the spectrum. Therefore, wins should be less frequent than average but more rewarding when they do occur. The top payout for Dinopolis is 50,000 x your total stake per spin.

The first bonus feature for this slot is the Multiplier Wilds feature. This is probably the simplest feature that is available to trigger for this game. Some wilds (the golden teeth) come with attached multipliers when you land them that are either 2x or 3x. These wilds double or treble the payout received if they are part of a winning combination.
The second feature is called the Dino Coin Symbols feature. The copper, silver and gold coin symbols can only land on reel 1 and reel 5. When they are part of a win which is at least 3 of a kind with wilds in the middle rows, they deliver an immediate cash win.

Lastly, there is the Dino Bonus feature. To trigger this feature, players must land the game’s scatter symbol on reels 2, 3 and 4 simultaneously. The game will then take you to a different screen where you will enter a mini-game. Here you will be presented with 4 playing cards, of which you must choose 2. The first pick of the two will determine the modifier applied to your free spins, the second pick will determine how many free spins you are granted. The modifiers are explained below.
The Sticky Stacked Wild = This modifier will add special stacked wilds to the board that come with a 2x multiplier. These can only appear on the middle reels.

The Single Reel Multiplier Booster = This modifier boosts the multipliers that are attached to the wilds that fall onto the reels up to 7x.

The All Reel Multiplier Boost = All reels that have a sticky stack wild get a boost of 1x to their multiplier.

The Golden Card = You are given two extra card picks at the end of the feature.

In addition to the special modifiers, there is also a special meter that is active during the free spins round. This is called the Dino Spin collector. It will collect Dino coins every time they fall on to the reels. If you manage to fill the meter. You will advance to the next level of free spins with two new picks of the cards.

Beautifully put together, visually stunning, and thematically novel are just some of the compliments this game is worthy of. However, it is also carrying one of the biggest payouts in the industry right now. So, even if you’re not that into dinosaurs, you might want to have a few spins anyway, as 50,000x your stake is a prize no one wants to miss out on.

Can I play Dinopolis for free?

Yes, most online casinos have a demo version of the game that doesn’t require players to bet any money.

When will Dinopolis be released to the public?

What is the RTP for Dinopolis?

The return to player percentage for Dinopolis is 96.4%.

What is the volatility rating for Dinopolis?

The volatility for Dinopolis is in the very high range.

What is the maximum win for Dinopolis?

The top payout for one spin in Dinopolis is 50,000 x your stake.