This slot we think must have been a huge project for Red Rake Gaming, not just because the playing window and pay lines are massive, but because this game has so many features. Regarding the theme, Red Rake Gaming has gone for a magical potions master kind of motif, with the reels being dominated by long-bearded magic men, various strangely coloured potions and other signs of magic including skulls and tomes of magic. This slot feels a bit busy when you first start playing it, however after some time you get used to how the slot functions and how each feature impacts the gameplay.

Speaking of features, Alchemy Ways is filled to the brim. In this free slot, we have wilds, a special Hand of Alchemy feature as well as mystery blocks and a minigame. This mini-game involves spinning a huge wheel of fortune which displays several modifiers, which are mainly populated by multipliers. Joining all of these bonuses is the awesome free spins bonus which gives you a generous array of modifiers on top of the already helpful free spins.

The theme for this slot as we have briefly mentioned, is one of magic and more specifically alchemy. Alchemy is an ancient branch of medicine/philosophy that was a practice of making potions and reciting incantations to ‘transmutate’ an object or create a special substance that could imbue the recipient with special abilities or qualities. It is a kind of fun way to say magical potions. Red Rake certainly went to some effort to make this slot seem mysterious and exciting using this theme though.

The background for Alchemy Ways looks a little like a subterranean lair or basement where mysterious potions and magic spells are concocted before being released on the unsuspecting victim. There are very few visual cues about where you might be, yet this is probably an intentional design decision to keep players engrossed in the mystery of the slot. What you can see is a dusty desk and a sideways look at a couple of books. From this, we can infer that this is perhaps the Magician’s study.

The first thing that you notice about the board is that it is massive – it is in a 6x10 format. Thanks to the amazing quantity of features there are also two meters present in this game attached to the game board. To the right of the board is the winning cash meter, decorated like an hourglass which fills up with blue liquid, representing money. To the left is the free spins meter with various points indicated to illustrate when players will be awarded a rising number of free spins.

The symbols for this game are split into low-paying, high paying and special symbols. The low-paying symbols for this game are the card symbols which comprise 9 to A in card royals. The high-paying symbols are the picture symbols that are thematically related to the slot. These come in a variety of forms. These include skulls, magical books, potions of various colours and the alchemist/magician himself. He is the most valuable of the high-paying symbols. The specials include the hand of alchemy symbol, the blue elixir, the silver and gold ingot symbols (this game’s scatters) as well as the wild and the mystery block symbol, which is a series of interlocked triangles. 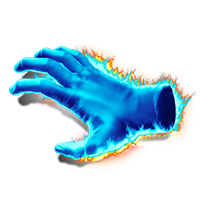 Alchemy Ways is played on a 6-reel, 10-row playing window with as many as one million ways to win.
To create winners in this game, players must match a minimum of 3 symbols together in a cluster, as this is a cluster mechanic game. The one exception is that you only need 2 of the alchemist symbols to form a win. The betting range for Alchemy Ways is 20p to £25 per spin.

Further information regarding the slot, including a display of the paytable, can be accessed by clicking on the settings menu. The spin button is located on the right-hand side of the reels. You can set up auto spins in the game’s menu.
The volatility for Alchemy Ways is rated in the very high range. The return to player percentage for Alchemy Ways is 95.30%, a little under average. The biggest payout that players can win on one spin is 8,000x your total stake.

As in most games, the wild symbol in Alchemy Ways helps you to form wins by stepping in for another symbol (barring the special symbols).
The Hand of Alchemy is an interesting bonus, with each spin it moves across the reels and can be triggered at random. When it moves, its previous position is filled in by a random symbol which can generate wins.

Next is the mystery symbol bonus. This symbol can appear randomly on the board and when it does it will reveal a random symbol. Getting a combination of the same symbols causes wins. If you get a losing spin with a mystery symbol, however, do not fret. In this case, the symbol fills up the blue hourglass meter on the right with the blue elixir. When this meter is full, the bonus wheel feature is triggered which gives you a spin on the wheel of fortune. Prizes on the wheel of fortune are made up of a variety of multipliers which can help you score bigger wins.
The golden ingots that you see that fall on the reels represent this game scatters. Landing various combinations of these on the board can also help increase your multiplier up to 200x!

The silver ingots on the other hand do the same job but can only increase the attached multiplier to 100x. Landing 10 or more of the elixir symbols throughout the game will trigger the game’s free spins round. During this feature, the alchemist may arrive on the board and award a random multiplier which will be applied to the total of your wins earned in the feature. If that multiplier is under 12x your stake, you will instead be given an extra 4 free spins.

With an amazing selection of features, a massive amount of pay lines and a max pay out fit for a King, Alchemy Ways is as magical as its special potions. On the other hand, a quick note of caution should be made that this game is also incredibly volatile, plus the RTP is under average, both factors of which should be taken into consideration before you play this game.

How many pay lines are available to win in this game?

Alchemy Ways has as many as one million cluster pay ways to win.

What is the return to player percentage for Alchemy Ways?

Can I play Alchemy Ways for free?

Yes, there is a demo version of this game available on most online casino sites.

Yes, Alchemy Ways is optimised for all devices.

Who are the creators of this game?

for playing with Alchemy Ways: