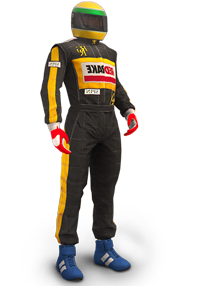 It's race day, the cars are gassed up, the track is pristine, and the fans are packed in cheek by jowl, let’s get racing! This game as you may have already guessed is racing car themed and as such is fast, furious and exciting in equal measures. This game is styled in the typical arcade game fashion with chequered flags, racing helmets and golden trophies making up just some of the classic racing symbols. In terms of the vintage of the cars, there are quite a few which have been borrowed from the 90s’ and even earlier, as there is quite the collection of cars from across the years racing each other. Maybe it’s a charity race event?

Whatever the racing event, this game does come with an interesting collection of features. These bonuses include wilds, a Speed Run feature which is unique to this game and the Sticky Pistons feature. Joining these already generous features is the game’s free spins round. This last feature comes with a specific meter. It fills up with each win that is landed in the bonus round and at certain points delivers multipliers to help increase the size of your wins in this feature.

As we have already established, this slot has a strong racing theme. More specifically, this game is an F1 racing themed slot, meaning that the cars are low to the ground and built purely for speed – hence the name Speed Heroes. However, these cars are not the newest. What we suspect is that Red Rake Gaming have found some already created graphics of various race cars and muddled them all together to save them having to animate any new cars. This might be considered a little lazy if this was an out and out racing game, however it works just fine for a slot game.

The background for Speed Heroes looks to be some sort of mechanical bay inside the engine. In fact, what is more likely is that the reels and background are supposed to represent the piston chambers of a race car. This would explain the exhaust pipes picture to the right-hand side of the reels. Why they went with a blanket sheet of rusty metal and not the open concourse of a grass fringed racetrack, defeats us here at Slots 777 though.

There isn’t too much to be said for the board. To the right of the reels is the multiplier meter which has been styled to look like an old-fashioned oil gauge. To the left is some sort of protected wiring cased in steel.
The symbols for this game are represented purely by racing paraphernalia, there are no card royals here. We have a collection of different coloured race helmets, two crossed chequered flags, a spare plug, a speedometer, as well as a racing tyre and two different racetrack drivers. The race car drivers are the symbols that can transform into expanding wilds that cover reels 1 and 5. However, the most valuable symbol in this game is the red petrol jerry can that you will see in the bonus rounds. The race car drivers are the wilds, whilst the trophy is the free spins scatter. The silver pistons are related to the sticky symbol bonus.

Speed Heroes is played on a 5- reel, 3-row game board with 30 available pay lines to play on. To create winners in this game, players must match a minimum of 3 symbols across a pay line starting on reel 1. The betting range for Speed Heroes is between 30p and £60 per spin. To change your betting level per spin, use the bet adjuster tool located at the bottom of the playing window.
Further information regarding the slot, including a display of the paytable, can be accessed by clicking on the settings menu. The spin button is located on the right-hand side of the reels. You can set up auto spins in the game’s menu.

There is quite a range of features for this slot, each of which is explained below.
The first and simplest feature is the wild bonus. The wilds for this game are the two race car drivers wearing helmets. They can substitute in for any other symbol barring the specials to give you more chance of creating bigger wins.

The next feature is called the Speed Run feature. Again, the key to this bonus is the two race car drivers. This bonus is triggered when both drivers take up the first and fifth reels in their expanded formats. Throughout this feature, race cars will drive along the reels depositing extra wilds onto the board, helping players to create bigger wins.

Players will notice that on the reels now and then you might see a silver piston symbol. Landing 3 or 4 of these on the same spin gives you one re-spin to land the 5th one. If this should happen, you will be rewarded by triggering the Sticky Pistons Roulette feature. This gives you 3 spins on a roulette wheel, with each space representing a prize.

Lastly, there is the golden cup bonus symbol. If you land five of these, you will trigger the free spins round and receive 24 free spins to play with. At the side of the reels, you will notice that there is a meter, every win fills this meter. At various points of filling the meter, you will be rewarded for your success with a selection of growing multipliers that top out at 5x.

Although this game may look a little dated and simple, there is quite a lot going on here both in terms of features and the classic race day theme. On the negative side, the RTP is pretty poor and the top win isn’t much to shout about either. However, if you like a spot of racing and taking home a bundle of small wins, this could be a good choice for you.

Who are the creators of this game?

What is the volatility rating for this game?

The volatility for Speed Heroes is rated in the medium range.

What is the top payout for Speed Heroes?

The maximum win available in this game is 1,000x your stake.

Yes, this game is optimised for all devices.

for playing with Speed Heroes: