If a slot game has been designed by ReelPlay, you can be reasonably confident that it’s going to be a good one. And that’s just what we find with the El Dorado Infinity Reels slot game. You’ll notice from the first time that you open up the game that it has been designed by experts. We’re not going to say that it feels like you’ve been transported back in time to the Aztec era, but it’s the next best thing until time travel is invented! At the center of all the play is the El Dorado temple; el dorado is Spanish for ‘the golden’ - and it’s true that the temple is positively glistening in the color. As with all ReelPlay plays, this slot game is an experience as well as a way to win money. Indeed, whether you’re playing for free or there’s money on the line, this feels like a game that all people who play slots will enjoy. 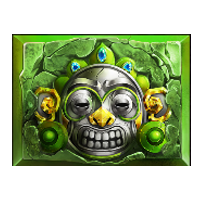 This is ReelPlays Aztec offering. Most slot companies make this type of game at one point or another, but few do it as well as ReelPlay. The theme runs throughout, with every design element featuring some aspect of Aztec culture. All the playing symbols, for instance, are in line - there are gems, tribal masks, and the temple, which is the star of the show. These aren’t the most imaginative symbols, since they’re broadly what all Aztec slots feature, but the company knows how to design games, so these ones pop brighter than the rest. It’s not just the design of the symbols that’ll get players hooked, however - the animations and artwork surrounding the game also make it a joy to play.

The gameplay of this slot is different from others. Indeed, that’s what makes it so much fun to play - they’ve taken a tried and tested concept (Aztec theme) and taken it in a different direction. Rather than using a standard grid and row system, ReelPlay has incorporated an infinity reels grid, which means that you’ll be trying to get five or more symbols clustered together. There are a couple of options when it comes to playing - you can play for free, and just have a fun time testing yourself against the computer, or you can put money on the line. Stakes can be between 0.20 and 100 credits, with greater rewards for the larger amounts. The return to player ratio is slightly above 95%, which is about average for this type of game. 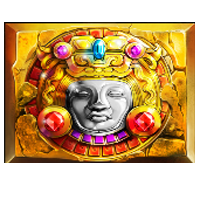 In all you’ll find five symbols in the slot game. These are: the blue and orange and green gem; the pink and red and yellow gem; the sapphire and emerald mask; the ruby mask; and finally the temple and golden mask, which is the highest value symbol. At the lower end of the scale we have the blue and orange and green gem, which is worth just 1x the stake; the temple and golden mask has 5x the value. That might not sound like a lot on the face of it, but there are many ways that you can multiply those values, if you’re lucky with all the features that this game has.

There are a number of features which can increase your chances of winning cash - and the amount that you win. There’s a wild native symbol, which can be used as another symbol; if you need one more to complete the set, and then pull out a wild native, then you’ll be in luck. When you land a winning streak, an extra reel is added; and every time a reel is added, the winnings will multiply by 1. It’s still not the highest paying slot out there, but the winnings can quickly add up, which always makes things fun.

In all, this slot game is just what we’ve come to expect from ReelPlay. It’s fun, it’s perfectly designed, and it does something different from all the rest. Those things alone make it interesting enough to keep on coming back for more. And with the possibilities of racking up plenty of multipliers, you might just find that these games are more than just fun - they can put some money in your back pocket. The best advice, as ever, is to simply dive in and give the game a chance when you can.