Some believe that if the universe is finite then ideas from humans are surely finite too, strange things such as placing a boat amidst sharks in a desert shows that humanity is not out of new concepts just yet! Fantasma Games are the ones that we must thank for this slot and if you are wondering where the title came from there is a book with a similar title that tells the story of modern-day gambling kings in Vegas. Perhaps the desert is a homage to Vegas, or it could have been used to define this slot from the very similar Razor Shark by Push Gaming, read on to find out.

This slot plays out over 5-reels with 4-rows and 40 fixed pay lines. The graphics are good nothing to shout about and there is an old galleon ship which takes part in a stand off with an enormous shark in the desert. Whist this is pure fantasy in the world of slots anything goes.

The main character is a heartbroken prince who has been dumped by the woman he loved so he has headed off to forget about her. Now you have the idea it is time for you to join the prince on his adventure starting by placing your bet from between 20p per spin up to a maximum of £100 per spin. The RTP stands at 96.33% and this is a highly volatile game. 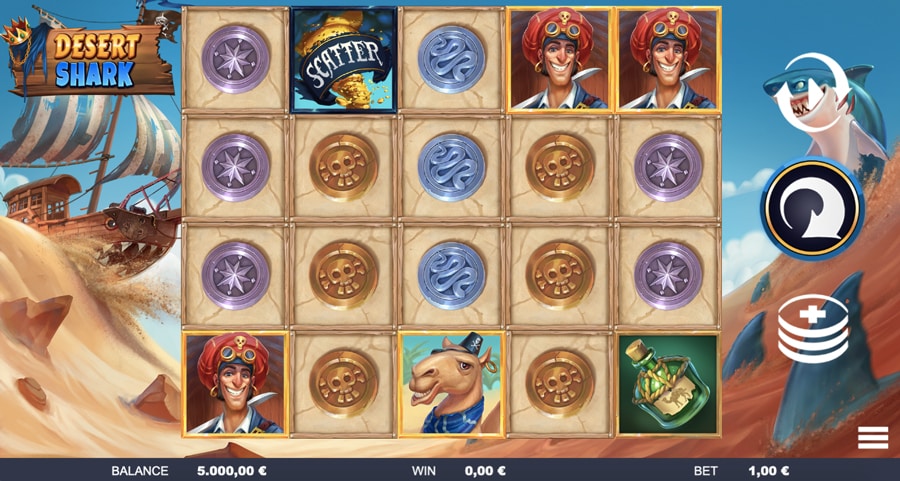 There are a selection of symbols with the lowest pay coming from the four coins with a purple star, silver snake, red palace and a gold skull on them and the higher paying symbols include a flask, a compass, an Arabic water jug and a smiling camel. The prince pays 5x your bet when you land five, however, he is not the most valuable as this is the golden “W” which is the wild which pays 7.5x your stake for five and can substitute for all regular symbols to create winning combinations. There are other wilds that have extra roles and give different ways to change the game.

Desert Shark is as powerful as it can be in the free spin bonus feature where the sandstorm scatter can land on your 2nd, 3rd and 4th reels. When you have three scatters in view you will be rewarded with 8 free spins. When the free spins begin 1 – 6 random dynamite wilds are added to the reels. If you manage to land a shark wild this will activate a dynamite wild in the swim swim feature and this explodes and upgrades two to six symbols to wilds or wild multipliers.

When you first see Desert Shark you may think it is one of the cute, friendly slots but believe me it is totally the other way! It is highly volatile and is geared towards the harder gambler. If I am honest this is not the most exciting of slots and with the wild and multipliers that are on offer you would expect far more win potential that I was party to.

The developers have tried to build the game but is devoid of the trimmings and I got the impression that the developers are far more concerned about the business side of the slot rather than the game the player gets. I can best sum this slot up as like a trip to the desert where you either walk to a safe place or end up dehydrated and left to die!

for playing with Desert Shark: