We all know that Albert Einstein is probably the most famous scientist in history, however if you choose to spin the reels on this new slot Einstein Eureka moments from the developers at stake logic you will not only get to play with Einstein, he is also joined by the geniuses Charles Darwin, Alexander Graham Bell and Sir Isaac Newton. The slot plays out over 5 reels and 20 pay lines, and the symbols stand 3 high on every reel. Prizes are awarded for landing three or more the same symbol across a pay line but as one will expect this Stake Logic slot is jammed full of bonus features with many in game extras and a free spins round.

The developers at Stake Logic have managed yet again to create an exciting slot which can be played on all devices giving players the freedom to play wherever and whenever they wish. This UK based development company provides the slots to land-based casinos, clubs, and pubs, and they have also created several social games such as Bingo for the British market. 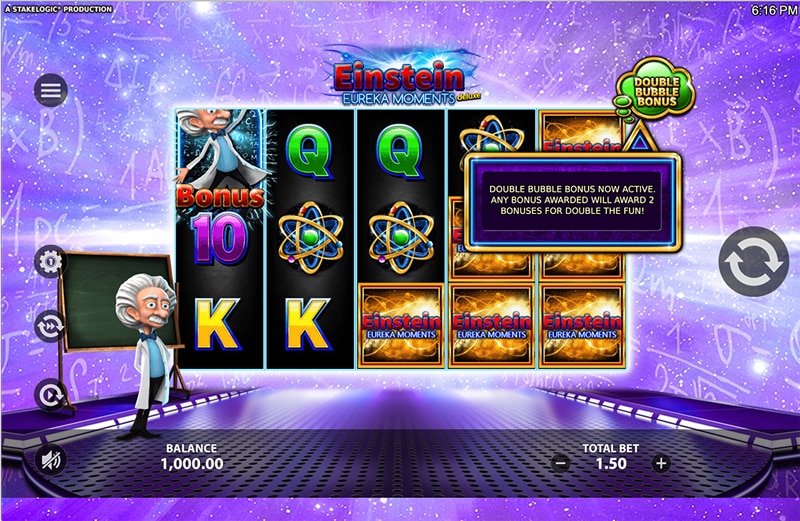 Einstein Eureka Moments is presented extremely well with expertly executed animated cartoon style which sees Albert and his friends walking around the game, introducing players to the features, and celebrating wins. The backdrop is made up of numbers and equations as well as some energy bolts the flash on and off around the screen to provide an eerie appearance. To me it looks as though Einstein is standing amidst the set of the game show, but this could just be the way I see things.

When you land the same symbols across you pay lines you win multiples of your total stake and whilst these are smaller wins, they occur frequently and will be made up of the lower paying playing card symbols. If you land the playing card symbols 10 through to King you will be awarded with prizes of 0.2x, 1x and 6x your bet, depending on the number of symbols that lands on your reels. The Ace pays slightly more, and when you land the unique symbols which relate directly to the theme such as jars filled with colourful chemicals the reward is 0.8x, 3x and 10x your bet, the strand of DNA pays up to 15x your bet and the Atom symbol returns the top prize of 20x your bet.

The highest value symbol is the game logo, and this will pay you 0.2x your bet when it lands on two of your reels, and then 2.5x, 8x, or 50 x when it lands on your 3rd, 4th or 5th reel across a pay line. There is also a wild symbol in this slot and this can substitute for all of the other symbols to create a winning combination or to extend the win across your reels, and what helps even more is that the wild can be stacked on a reel. 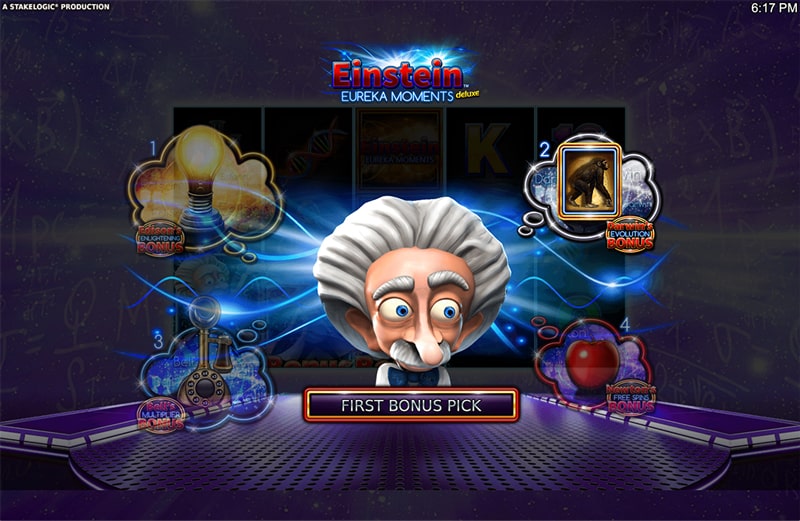 Have that awesome excellent side games which can be triggered by the bonus symbols, with each of the features being named after a famous scientist. The features are triggered when you land three or more symbols of Einstein anywhere on your reels. You are then taken to a second screen, where Einstein randomly selects any of the four bonus rounds.

The Newtons free spins will award you with an unlimited number of extra games, where apples fall onto the reels, and turn them into extra wild symbols. Obviously you are not actually given an unlimited number of free games instead you are rewarded with three lives, each of which comes to an end when an Apple drops onto Einstein's head, however, there is the potential to play 10 to 20 games before the round is over.

Next comes Bells multiplier spins which are limited to 10. Next to your reels you will see a telephone which rings when you land a winning combination. When the telephone stops ringing, you are awarded a multiplier for the win which ranges from 1x right up to 9x the amount.

Next feature comes from Charles Darwin and you will be rewarded with eight free spins in this evolution bonus feature. Whilst playing the extra games, Darwin may appear and remove the lower value symbols from the reels, therefore making it far easier for you to land some higher paying combinations. As the feature progresses, he takes away more symbols, so these evolve into even more rewarding spins as you proceed through the round.

The final feature is Edison's Enlightening bonus and this is yet another special round of eight free spins, however it is different because a light bulb will appear above a randomly selected symbol, and all of the symbols of this type turn into extra wilds, and although it's not certain this will lead to winning lines it is fairly likely that they will. At the beginning of every bonus feature, an instant reward of 2x the bet is paid out so even if you do not win anything you do still have this consolation prize.

For even Higher Pay outs

Unlike other slots Einstein Eureka Moments offers some interesting ways in which you can place your bets. With this being a fixed pay line slot, all your lines are always in play, giving you a range that starts from a minimum of 0.20 per spin and goes up to a maximum of 150.00 per spin. However, there is also a double bubble option, which increases your stakes up by an additional 50%, should you choose this option you will see the bonus rounds being activated more often.

There is also an auto play button which will let you set the game to run for 100 spins whilst you sit back and watch the game play out before you. You can pre-set any loss or win limits and the auto play spins will stop once these limits have been reached.

Einstein Eureka Moments is a good-looking slot with high quality characters and some expertly created animated sequences to go with them. The gameplay is also of an excellent standard and players are offered a wide bet range making this game suitable for all, such as those wanting to bet a small amount through to the high rollers that are looking to land some huge rewards. The double bubble option sees bonus rounds playing out more often and whilst this does not affect the overall return to player percentage it is nice to have the choice whether to use it.

I really enjoyed playing this game it is an interesting format with a great theme that will appeal to a mass audience. However, you do not have to take my word for it, give it a spin or two you will not be disappointed.