Gods of Death from the development team at Stakelogic and is set within an ancient Egyptian burial chamber. If you are ready to take a virtual trip through the land of the pharaohs and are prepared for the volatility that you will come across with some tempestuous extras. Keep reading to find out all about the duplicate reels and stacked wilds, which will see you rewarded with re-spins that drop wilds onto the game screen one space at a time.

There is also the feature that will reward re-spins that have attached stacked mummy wilds that will shift across the reels with every spin. You can activate the Super Stake by doubling your bet and this can be responsible for adding a huge number of extra symbols to your reels which give you even more chances to land a big win. 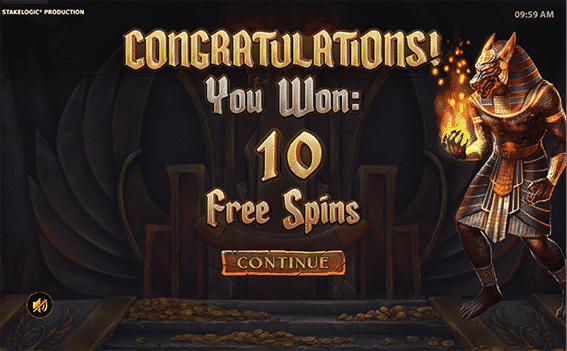 When it comes to the theme it is certainly rather ghoulish which is unsurprising considering the title of the slot. The imagery is chilling, and you will see that your game screen is being presided over by two animal god guards who are there to keep the Pharaoh’s burial chamber safe. There is an impressive orchestral soundtrack with a hint of Arabia, and this is something that is extremely well executed (pardon the pun).

The Gods of Death is played out over 5-reels, 3-rows and 40 pay lines. When you land a win, you will be paid from left to right and you will have to match 3, 4 or 5 matching symbols on a pay line. If you get lucky and land the mummy, the scatter, or the snake queen symbol as you only need to land two to create a win.

When you are ready to place a bet, you can choose from 10p per spin to a maximum of £40 per spin when in the standard mode and 20p per spin up to £80 per spin in the Super Stake feature. To adjust the size of your bet you can use the handy little coin tab that you will find on the left of your reels. There is also a multitude of options you can use when it comes to the auto play, you can set defined or unlimited spins. You can also set a win, stop, and feature limits and finally speed up your reels by choosing the turbo mode.

When it comes to the return to player this stands at 96% which is the standard, however this is not the highest variance that you will come across. The volatility is still medium to high and can provide some truly explosive activity with a maximum win per spin that stands at an enormous 11,800x your stake. 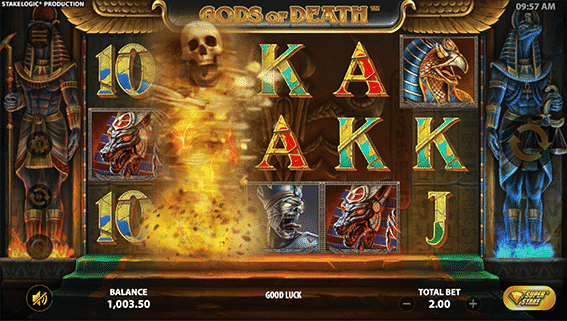 Expect to come across the usual playing card symbols from 10 through to Ace as well as a mummy, and three animal gods. The highest paying symbol is the jackal god which will reward you with 7.5x, 30, or 100x your stake for landing 3, 4 or 5 on your pay line, respectively.

The interface used in this slot gives you many choices and this is not limited at the auto play. You can set the gamble to come into play every time you land a winning spin and adjust the music and sound effects to your own specifications, but fortunately the pay table is easy to understand. This mobile version of this slot is just as good as the desktop version, with the visuals faring well and extras providing plenty of different game play regardless of where you choose to play and through your chosen medium.

There is a great selection of extras on offer in this slot, there are the duplication reels, expanding wilds which can activate the re-spins as well as a classical free spins bonus. I will now look at the features in further detail below.
The first feature is the Tornado, and this can be randomly activated when you land a spin that has not resulted in a win. The tornado blows across your screen picking one of your reels up as it blows through and one of your other reels gets filled with the same set of symbols and a new pay-out is then awarded.

Next up is the Snake Queen which is the games wild and she can substitute for all the standard symbols to create winning combinations. However, when the Snake Queen lands on the middle reels it expands and turns the entire reel wild. This is followed by several re-spins which are followed with the expanding wild dropping down a single position until is falls off the bottom of your screen. Landing five of the Snake Queen will reward you with 200x the total stake, but this is only activated in the base game.

When it comes to the free spins feature you need to land 3, 4 or 5 of the Pharaoh which is the scatter and you will activate the free spin feature. You will be rewarded with 5x, 25x and 100x the total stake plus 2, 10, 20 or 50 free spins, better still you can win a total of 100 free spins in any one feature.

The Mummy Wild feature sees the Mummy symbol taking the place of the Snake Queen and when the Mummy appears, she will fill the entire reel and then shift one reel to the left until she disappears completely from the reels.
The final feature on offer is the Super Stake feature and here you are given the chance to double your bet and activate the Super Stake mode. Randomly a symbol is selected and hundreds of this symbol are then added to your reels giving you a good chance to land huge winning combinations.

Although this is not the happiest of themes but there is an awful lot to smile about in the Gods of Death slot game. The imagery and sound are top notch and the game offers great variety in terms of gameplay. The base game is boosted by the expanding wilds and the Tornado feature, not forgetting the shifting wilds that can certainly provide a huge bonus in the free spins feature.
Whilst I have played plenty of slot that have similar themes nine have taken me on a virtual trip around ancient Egypt which is one of the reasons this slot will stand out. The game is strong and provides some exceptional game play and I cannot recommend this slot highly enough, a definite 10/10 from me.