The Expendables Megaways from the developers at StakeLogic and SkyRocket Entertainment and invites you to join the ageing crew of elite mercenaries on their successful action thriller. The heroes of the slot are characters from the Hollywood blockbuster of the same name. The variable reels use the BTG gaming engine and is complete with cascading symbols, reactive wins, a collectable Bullet Bonus feature and a free spin feature with randomly increasing win multipliers and low-value symbol removal. So, if you are ready to join Barney, Yin, Gunner, Lee, and Hale with a chance to win 26,965x your bet read on.

The slot plays out over 6-reels, with up to 7-rows and a massive 117,649 ways to win. The Expendables Megaways is available to play on all devices and has a bet range of 0.20 to 20.00 credit per spin. If you decide to play with the SuperStake active the bet size increase to 0.40 to 40.00. The return to player stands between a medium and high volatility and the default is set at 96.02%.

ew Playing with the dynamic reels there are a number of ways to play from 324 to 117,649 and this is determined at random for a spin sequence which you select two – seven symbols for the 1st and 6th reels as well as 2 – 6 symbols for the 2nd and 5th reels. There is also an extra reel on top of the game window which has four positions, which extends from the 2nd to the 5th reel and spin more symbols in view during every round of play, which in effect creates an unlimited variations of rows and symbols making every spin unique.

Wins are paid for matching symbols and start from the left, and symbols that create a win will explode to see other symbols falling into their place. All the time you land new winners the reactions continue which means that you can land repeated wins from a single spin. As soon as there are no winning symbols the round ends and the wins are amassed from all the cascades and paid out before your next spin. 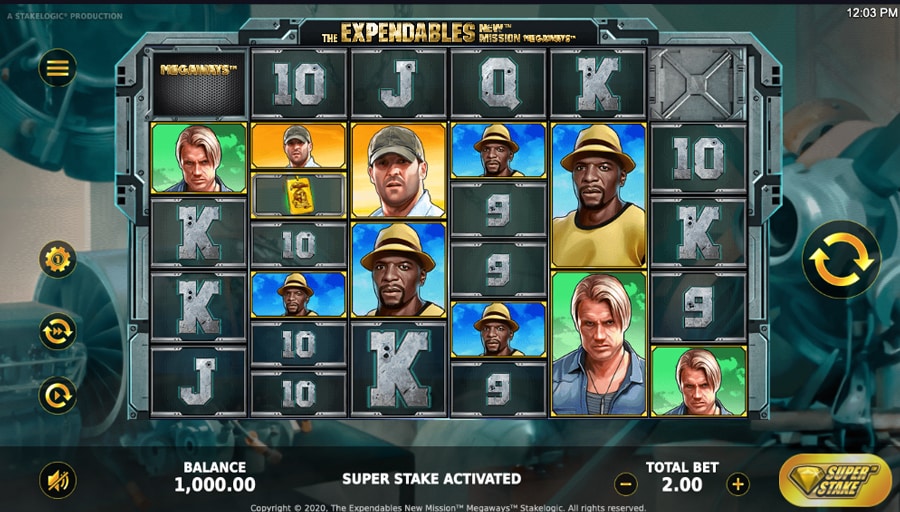 When it comes to the symbols you can expect to see the low paying cards from 10 through to Ace and these are followed by the movie characters, Terry Crews as Hale, Jet Li as Yin, Dolph Lundgren as Gunner, Jason Statham as Lee and Sylvester Stallone as Barney. Barney is the most valuable and will reward you with 12.5x your stake when you land six of a kind. The wild is represented by the dog tag and can substitute for all the other symbols apart from the skull which is the scatter to create winning combinations. The bullet is a symbol you collect and will start one of the features when you have collected five in the special collection meter.

Before you start to spin your reels, you need to decide whether you want to have the SuperStakes in play. This does double your bet, but it can activate two additional features and has an average hit rate of 1:32 spins. The options you will receive will be to either have a large random number of wild symbols added to your reels while the spin is in progress, alternatively you can choose for 1 – 5 royals removed from the reels for the current spin. You can see when the feature is active as there will be a diamond located in the bottom right corner of your screen. The first feature of note is the Bullet Bonus, which sees a gun magazine meter that sits to the right of you reels collect bullets that land on the reels to fill up the meter. When the meter is full the gun will shoot five positions on random reels to give between 2 – 6 wilds before the wins are evaluated. The bullet meter resets, and you can then start to collect these again.

If you land four or more of the skull scatters in view at the end of a spin sequence you will be rewarded with 12, 16, 20 or 24 free spins complete with a x1 starting multiplier, respectively. This feature continues all the time you land more scatter, and the win multiplier increase by x1 after every winning spin with no limits.
In the bonus round the most promising feature is the symbol removal which sees any win that is created and includes the playing card symbols will see them removes for the rest of the feature. The removal happens consecutively starting with the 10 card, this means that you have to land a win which contains the 10 playing card to get these removed from the reels, then you need to land a win with the Jacks and so on. If you do not land a win then the symbols stay on your reels. If you get lucky and manage to remove all the playing card symbols you will only have the high paying symbols, the wilds, and the scatters in play on your reels. In other words, mega wins at your fingertips.

If SkyRocket Entertainment is not familiar to you, they are the media company that has acquired the rights to numerous blockbusters which include Hercules, The Expendables and Rambo. They have also purchased the independent studio that is known as the Games Company which tells me that they are planning to branch out into the realms of online gaming sometime soon. Partnering with StakeLogic is a great move on their behalf as this is a fitting partner as it gives them a great first foray by using the licensed Megaways engine and characters out of the hugely acclaimed movie franchise The Expendables.
I really enjoyed playing this slot, not only were the visuals outstanding but the graphics and animations were crisp, clean, and sharp. This combined with the gameplay, suspense, and win potential and you have a slot that is sure to be a firm favourite amongst all players.