Raven’s Eye from the software developers at Thunderkick invites players to uncover the bond between a mysterious Druid and her sacred Raven. Players are taken on a journey that sees them in a fantasy land where the Raven and a Druid work together to give players the opportunity to land mystery symbols and free spins. 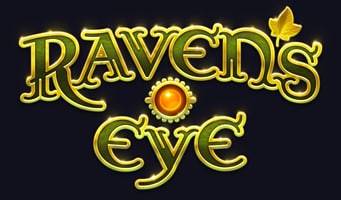 The slot plays out 5-reels, 4-rows and 30 fixed pay lines with the reels set within a highly decorated stone structure which sits in front of a backdrop of ancient trees, pink roses and a moss-covered buildings and castle. The soundtrack is serene and creates a true air of calm and tranquillity.

Raven’s Eye offers players the chance to play for free which is always advisable as it provides players with a true insight into how the game plays out before they begin to bet for real money. The bets start at just 10p per spin up to £100 per spin. The slot can also be played on all devices giving players the freedom to play the slot wherever they are. 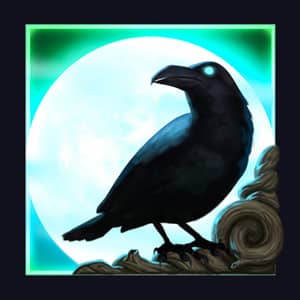 The lower value symbols come in the form of the usual playing card values 10 through to Ace. The higher value symbols are represented by four elements which are (blue for water, green for the earth, orange for fire and white for the air) as well as the female druid character. The druid is the most valuable symbol and rewards players with x1, x2 or x12.5 times their stake when they land 3, 4 or 5 in a combination.

The wild is represented by a large orange “W” and this can replace all of the regular symbols to create winning combinations apart from the bonus scatter symbol which is depicted by the Raven which is the symbol that can activate two of the main features. The wild and bonus scatter also have pay outs of with x1, x2 or x12.5 times their stake when they land 3, 4 or 5 in a combination.  Although Raven’s Eye only offers a couple of features there is potential to land big wins.

The raven can appear stacked on any reel and when it makes an appearance it transforms all of the matching symbols which potentially means even bigger winnings. The feature becomes active in the base game when players land three or more of the Raven mystery on three or more of their reels.

The free spins come into play when the player lands the raven symbol on a minimum of three different reels and once the reels have been transformed the players is rewarded with 15 free spins. Every raven that lands during the free spins come complete with an orb which fills the meter which is found on the left hand side of the screen. Once the meter is full the player is awarded with a further three spins with the symbol that shows up at the top of the screen transforming into a raven.  This feature can be reactivated up to five times providing players with the potential of landing 25 free spins.

Whilst Raven’s Eye is a very playable slot that offers some truly clever bonus features which can provide good wins when they are activated. However, despite the slot looking splendid it is a low to medium variance slot meaning that the most players can win for a single spin is x375 of their total stake. I personally really like the slot but for those wanting more win potential they should give Dragon Horn or Midas Golden Touch a spin from Thunderkick.